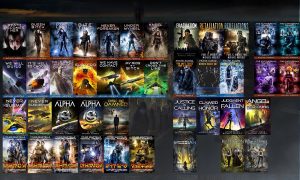 In the beginning was the word…  Wait, wait.

At the beginning of my career, there were actually thirteen Kurtherian Gambit titles and thirteen one to two sentence explanations of what was going to happen in each book.

Then, something miraculous happened.

The books actually started selling and fans were asking for the book series to go longer. In my naivety, I thought doing twenty-one titles would be a good idea.

So, I increased the thirteen titles to twenty-one titles, broke them across three arcs of seven books each and create the core of the Kurtherian Gambit.

Now, I’m a big fan of knowing what’s coming, and you the fans were asking what was coming, so I would put the titles into the back of the books, and the expected due dates. That worked pretty well for about six months when we started getting ‘You are being bad!’ notes from KDP (Amazon’s Kindle Direct Publishing) arm that our dates were a problem, we need to go yank them out.

Unfortunately, we are publishing like crazy, and going back all the time to change all of these inside notes because Amazon would yell at us would not work.

So, I just put them all in the book and hoped we kept up with the readers (#WeDont).

Right now, the publication schedule is:

TSDA03 (Darkest Before the Dawn – Michael) is probably early October 2017

TKG 21 (Life Goes On – Bethany Anne) and TSDA04 (Dawn Arrives) will probably be a joint release.  Meaning, I’ll setup a preorder for both books (far in advance) and they will release on the same night. The reason is that there will be ‘spoilers’ in both books, so it will be up to the fans which one they wish to read first.

So, I don’t have a final date for these books, yet. I can tell you that financially, it is better for me to have them out sooner, rather than later. Further, I know you the fans want the same thing 😉

I hope this helps explain just a little bit about why the books are listed the way they are in the back and how that started.