Johann from the sub-assembly for the Advancement of the Human Race stepped into the outer office of Congressman Mckinney and nodded to his secretary who picked up her phone and put up a small hand with two fingers up.

Johann cooled his heals for just under two minutes when the door opened, and Congressman McKinney stepped out speaking to a gray-haired gentleman. “Tom, I’m sure my voting record for retroactive immunity for telecoms’ warrantless surveillance speaks towards my high regard and understanding of how we need to both support technology, while helping local and national authorities.  Don’t worry, I’m sure that the communication technologies this group must be using will come to light, and then we will stomp on the use and ban it without proper licensing.”

“Just so that all of the jobs are protected, George.”  The older man spoke, “If there is something they have that is revolutionary, the people in your area will be affected if we have to compete across the way.  I’ve got Fifty-seven senators and two hundred and twenty-seven congressman ready to back up a moratorium on new technology introduction.”

Johann watched the two men shake hands as Congressman McKinney put one hand over the other, “Tom, that is now two-hundred and twenty-eight.”

“Thank you, George.”  The two separated and Tom knocked on the secretaries desk as he walked by and stepped out.

McKinney turned, “Johann, good to see you.  Come on in.”

Johann nodded to his secretary and stepped into the office ahead of McKinney, who closed the door behind him.  “Please, let’s sit over in the easy chairs.  That damned desk chair hurts my ass.”

Johann turned left over to the two comfortable lounge chairs around a round coffee table with a small love-seat in dark blue next to a book case wall with a thin LCD tv set back in the middle.  Johann turned to sit down and settle comfortably, “Thanks for seeing me, Congressman.”

“George, please.”  He spoke eyes half laughing, “I know, it’s all official until I say otherwise everytime with you.  However, after six conversations and six amicable separations, we have never done any business.  Why do I sense that this time is going to be different?”

Johann smirked, “Because a birdie told you something?”  He continued, “Because you have an important person in your area that we are concerned with and finally because the fifty-thousand dollar check that one of the concerned companies I represent was cashed.”

George said, “Yes, an interesting situation there. It seems I have become one of the most important senators recently since I represent Miami and the surrounding areas.  Those areas have had very, very rich people and for that reason I have always had a certain amount of influence, but it has become a night and day difference right now.”

Johann agreed, “I imagine it has.  Not too many people have access to quite so many important contacts as you nor do they know them that well.  The Colorado representatives have not had much luck since the area was previously an Army base, and so they did not focus as much in that remote area.”

“So, what is it that you are asking of me?”  Congressman McKinney broke in, “Because I’ve had a conversation with a previous Congressman, who was kind enough to go out of his way to ‘accidentally’ run into me and warn me not to mess with a certain individual.  Would you know why that is?”

Johann’s eyebrows drew together.  He wasn’t sure which Congressman McKinney could be talking about.

“No guesses?” McKinney asked.  When Johann finally shook his head in the negative, Mckinney told him, “I’m going to give you a hint, “salt.”

“Well, if you allow mental issues to be considered a health issue, then certainly.”  George McKinney continued, “But no one here knew why he quit.  Oh, a lot of people knew he had something fishy going down in South America and would fly down from time to time.  But, with Florida an important hub for flights and business that isn’t strange for us to do that.  However, he came back from one trip and within ninety-days he was gone.  His own secretary mentioned that he seemed to be off from the trip until he finally left.”

“Ok, but what does that have to do with the CEO of TQB Enterprises?”  Johann asked, “I can only imagine that everyone, including Tom Carpenter, who just left, is focused on what they are going to do to interrupt their businesses.”

“Yes, everyone is, and no one can tell me exactly what is going on to frighten them so much?”  George stated, “as far as I can tell, TQB hasn’t upset anyone here on earth.  Oh, I know she is throwing NASA  a fit, but when I ask anyone on that committee, everyone admits they don’t get involved with anything and regardless of how much money is thrown at them, everything is ignored.  You cannot buy them.”  He finished.

“We know that.”  Johann leaned forward in his chair, “What do you know about Sean Truitt?” He asked in a tight and quiet voice.

George leaned in towards Johann, “The CEO?”  Johann nodded, “I was to understand his was a missing person case?  That happened what, a few months ago?”

“Three,”  Johann admitted, “They have found him.  He was at the very bottom of Cle Elum Lake.  It was him and his car in over three-hundred feet of water.”

“Ok?”  George replied, “So, am I to take from the we are talking you believe something amiss happened?”

“George, that part of the lake is a few hundred yards from any location which could be arrived at by car without a miracle happening.  He didn’t drive his vehicle off the road, across three hundred yards of water to then sink down.  We believe he was dropped.”

George sat back in the chair, “You guys think that TQB retaliated for the attacks on their base?  Why?”  George asked.

Dammit, he was going to have to be blunt with this idiot.

“George, we only know of one technology that can float anything metal, and that would be TQB’s containers to the moon.  So, the working theory is one of them was placed on the car and when Sean got close, it took him out to the lake and dropped him right where he was found.  Well,” Johann corrected himself, “Three hundred feet above where he was found.”

“Ok, buy why?”  George asked. “Let’s suppose you are correct and they are behind the killing.  Why did they do it?”

Johann shrugged, “Who knows?  Maybe Sean asked for a date from their CEO and she took offense.”

“Yes, I merely make a point of saying we don’t know why Sean Truitt would have been a focus.  But, if they are going around killing high-level CEO’s, do you thinking they will stop at that level?  What’s to stop them from coming after congressman and senators?”

“Why, have some of them done something to piss them off, too?”  George asked.

“Of course not,”  Johann replied while thinking, Hell yeah they have, and they are doing more.

“Don’t lie to the Congressman, he doesn’t believe you.”  George retorted, “Of course there are people on Capital Hill who are looking to either get in TQB’s good graces or get something out of them so they can be on someone else’s good graces list.”

“Like yourself?” Johann asked. “Not to put too sharp a point on it, but you did accept our donation and Tom left pretty happy.”

He waved a hand, “Tom is easy,” George replied, “I don’t believe anything TQB has is going to come out into the commercial telecommunication sphere anytime soon so what does it hurt to support something that won’t come to pass?”

“Ah, that makes sense,” Johann admitted, even if it did annoy him to think that his one major leverage point wasn’t going to do him any good.

“So, let me ask you again, Johann.  What is it you want me to do?”  George asked, politely.

Well, he considered, I’d like you to tell your buddies to arrest the bitch by knocking down her front door, but since that doesn’t look in the cards… “How about sharing the rumor with a few important ears that there is some back-channel talking about TQB possibly responsible for Sean Truitt’s disappearance?”

“This is what you want for your donation?”  George asked, surprised.

“How about that and one additional talk, when we have something a little more concrete to speak about your help?”

George considered his request for the necessary amount of time before nodding, “I can agree to this request and I have three relevant contact names to share this information with this afternoon.  Two are local down in the Miami area, one is down there, but is Fed.”

Johann stood up.  Now that negotiations were complete, the congressman would need to move on to his next appointment.  He stuck out his hand, “Congressman McKinney.”  He smiled at the joke.

Gorge stood up, “You ass!”  But didn’t keep the smile off of his face.

Johann left that office and worked his way to the other side of town.

He had another meeting to attend, and this one was going to be a little candid. 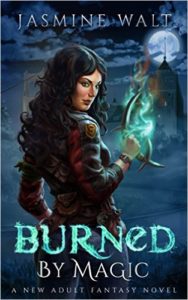 A best-selling author-friend of mine, Jasmine Walt, is going to go wide (outside Amazon) with her first book “Burned By Magic” in a couple of weeks.  Then, it won’t be back ‘in’ Kindle Unlimited until the end of August.  So, if you like the write up below, grab it and give it a go!

The first book in the hot new adult fantasy series readers are comparing to Ilona Andrews and Patricia Briggs.

In the city of Solantha, mages rule absolute, with shifters considered second-class citizens and humans something in between. No one outside the mage families are allowed to have magic, and anyone born with it must agree to have it stripped from them to avoid execution.

Sunaya Baine, a shifter-mage hybrid, has managed to keep her unruly magic under wraps for the last twenty-four years. But while chasing down a shifter-hunting serial killer, she loses control of her magic in front of witnesses, drawing the attention of the dangerous and enigmatic Chief Mage.

Locked up in the Chief Mage’s castle and reduced to little more than a lab rat, Sunaya resists his attempts to analyze and control her at every turn. But she soon realizes that to regain her freedom and catch the killer, she must overcome her hatred of mages and win the most powerful mage in the city to her side. 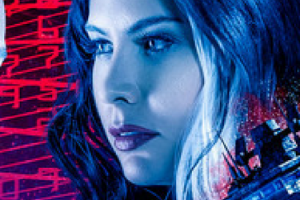 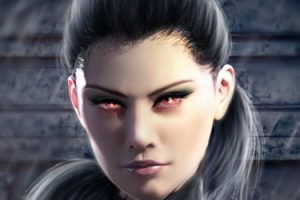