From the Author Notes of Nomad Avenged… 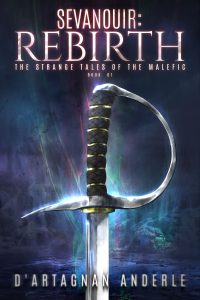 When I wrote Death Becomes Her which is the book that started the whole Kurtherian Gambit Universe that we all write in now, it was in part because it was a bucket list item.

You know, “Write a Book!” kind of bucket list item?

The slightly bigger part of the kick in my pants to make it happen, however, was a little more primitive. It was a father’s need to help one of his children. Parenting, if you are a parent, but no kids are out of the house yet, doesn’t stop at eighteen.

I have to admit that wasn’t what I believed as the first of three sons were growing up. I thought “Eighteen and they go off into the world” which (if my memory serves me mostly intact) was what I thought I had accomplished as a kid.

So, the second part of my starting to write was ‘I need to do this to be able to explain, with confidence, to my oldest son’  sort of thing (D’artagnan Anderle – Pen’ish name). His personality is a bit different than mine, and he is a whole lot younger than I am (25 years or so younger). I figured that I could write a few books, work out the kinks, and then let him know the parts he was missing and off he would go.

That really didn’t work. I was (perhaps) wanting his success for different reasons than he might want the success.

In fact, being brutally honest now, I know it.

When I first encouraged him to write a book, it was a no go.

It was “not something he wanted to do.”

That was a let down for me. I’ve shared this part of the story in previous author notes. I had to come to terms with the full circle of life not happening and that he just didn’t want to write, whether he had the talent or not.

Then, we spoke again a couple of months later on the subject.

During this conversation, we discussed it wasn’t that he didn’t want to write, but rather he didn’t know what to write about. A definitive story that was him. (For those who don’t know, neither D’artagnan nor Joey write like I write. Their personal voice isn’t the same and often my suggestions get either one of them to look at me like sons and daughters have looked at parents for millenia… “are you kidding me, Dad?”)

So, D’artagnan gave me two different story beginnings and I provided feedback. Fast forward four months as he worked, deleted, wrote, erased all to figure himself out as much as any early author has to in life. Meaning, who am I as a creator? What makes me tick, something I’m interested in writing about?

A couple of months ago, the Author’s Wife (AKA Mom) and I went down  to see him in the Houston area. He and I hung out for an afternoon and discussed the story ideas which he had been working on.

We discussed how he had started down the path of writing those other stories, how he had crashed and burned, and what it took for him to really bring out of himself the plot, the characters and the malefics that kept his imagination working in overdrive. Further, we discussed the specifics of how writing a book works, what it takes to get it edited, covers, and a whole lot more.

By then, I had learned that I couldn’t push authors. If he was going to do this, it had to be on his own.

This knowledge had not come from working with D’artagnan, but from the many other authors I had counseled over the last year which I put into practice mentoring my oldest son.

As a father, I wanted so desperately to see him succeed. As a publisher, I needed him to understand how it all works. The good, and the bad.

He got off to an amazing start.  Knocked out 15,000 words pretty quickly.

I had to gently ask what is going on, not ping him (easy to do in Slack, where all of my work gets done with other authors, editors and artists.)  Then, we might not chat for a few days as he did stuff. What stuff? I’ve no clue – I didn’t ask.

I had to be patient. Let him get through the hard stuff, work it all out in his own internal way.

Basically, it kinda sucked to be honest. As a parent, I just wanted the amazing to happen and off to the next awesome milestone in his life he would go.

However, I grew as well. I grew a little as I allowed him to work it out. I grew to know that each time he would come back, that he hadn’t dropped the project (probably one of my biggest fears, honestly) and that what he came back with… was stronger.

He, like Joey before him, has his own damned opinions and apparently, they aren’t so afraid of best selling author Michael Anderle to tell him ‘No, they didn’t like what he was suggesting!’

In fact, you could say they didn’t really CARE about whatever accolades and accomplishments their dad had built up, I was still just dad.  Oh, they respected my accomplishments, but they aren’t overwhelmed by what I’ve accomplished to do what I say without questioning it.  They, annoyingly enough…

Have their own opinion on their work.

Whether it is with Joey and “killing off some characters” or D’artagnan and his “the covers look better this way” they both will take stands on their work, and it doesn’t matter what my accomplishements and opinions are, this is how their art is going to be.

And I’m DAMNED proud of them standing on their own two feet as they build their own career.

Each one is different, each one is uniquely themselves.

Each one, I believe, has something to offer readers. Some of my readers will like their stuff, others won’t and that’s ok.

With D’artagnan, he enjoys a story where everything isn’t so black and white. Where, as the intro blurb to his book talks about, the Chosen might not want to save the world because it is the right thing to do.

He might want to do it because he wants revenge.

Not everything in life is black and white and the path to getting to the end might be a challenge.

That is D’Artagnan’s voice more than mine. The ability to weave a story where you might get to the same ending, but the path is …

Frankly, not the way I would write it.

So, if you would like to read a brand new author, an author that needed to know more about the Indie Publishing area before he was willing to stick his own toes into the water, I’d like to be the first to introduce you to…

(The Strange Tales of the Malefic – Book 01)

What if the chosen want revenge over destiny?

Sylas Chevalier is the latest son of a lineage of Maleficus, users of powerful and mystical items known as Malefics, to inherit his family’s blade, Sevanouir.

However, it came at a terrible cost.

Now a part of a reality that he once thought was a joke, Sylas gets a crash course in the world of his forebearers and must learn what it means to be the wielder of this blade, as mysterious forces approach with their own desires and intent, and they need Sylas and his blade for themselves.

Check out more on Amazon using the amazing ‘go to the right country’ link: