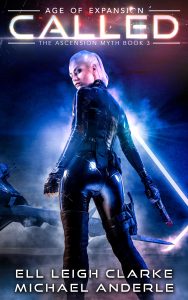 Brock led Paige and Pieter through the rather intimidating operations suite to take a peek at the weapons room beyond.

Stepping through the door at the far end, they entered the huge warehouse. Brock led them around the edge of the room past aisle upon aisle of advanced killing technology.

Crash ambled a few paces behind, calmly taking it all in. When he saw the missiles aisle, though, he whistled through his teeth, belying to his cool exterior. “That is a shit-ton of carnage waiting to be wreaked on something motherfucking deserving.”

Brock looked past Paige and Pieter to eye Crash in mock judgment. “Ignore the war-hungry crazy man behind you,” he said. “But he’s right. “He turned and gestured at the warehouse behind him. “There is enough ammo here to do all kinds of damage. And I have no idea how to use it yet just from looking at it. The tech is waaay advanced.”

Paige shook her head in disbelief. “I just… I can’t believe all this has been right next door to your workshop all this time!”

Pieter nodded in agreement, and glanced over at Paige. “Yeah, like, what the hell?” He paused a moment. “I wonder what programming language they used if this isn’t Sarkian?”

Paige’s eyes lit up suddenly, remembering. “So where’s this ship with the vampire on it?” she asked.

Brock nodded back the way they had come. “Yeah, you’ll see that when we go to the conference room.” He checked his holo. “We should make our way down there now, actually.”

He led them back through the ops room into the main corridor. Turning deeper into the base, he walked through the double doors to the hangar where he had stood in awe just twenty minutes before.

They marched through as a group and Brock paused, letting them take in the largest ship and the whole arrangement of flying machines.

He turned and looked at their faces, grinning. “Yup,” he said, satisfied. “That was pretty much my reaction.” He beamed at them, opening his holo and snapping a picture of them.

Paige noticed, laughed, and slapped his arm. “So this is, what? A space base?” she asked, still consumed by awe at the huge hangar and its contents.

Brock nodded. “Seems like. We’ll find out more at this meeting. Come along,” he told them. “Briefing room is this way.”

He headed down the metal steps to deck level, then walked around the perimeter past one set of steel double doors, keeping to an outlined walk way painted onto the floor. About a third of the way around the semicircular deck they came to another set of double doors. Brock pushed them open and held one door for the others to enter.

Crash strode through first. He’d hardly said a word, but Brock could tell from the flavor of his blank expression he was processing what was going on.

Pieter followed Paige through. “How big is this place?” he asked.

Brock shrugged, releasing the door, and continuing down the corridor. “No idea yet,” he admitted casually. Something caught his attention, and he glanced back as they walked.

The door he had just released was self-closing, and as it swung shut, the air pressure seemed to change minutely. Brock made a mental note to investigate it later. It felt like maybe the doors automatically sealed, which would be useful on many levels.

The group continued down the dimly lit corridor. The floor was a little rubbery, like it was electrically insulated. The walls, which seemed to glow, were made of some highly evolved nano-carbonate as far as Brock could tell; a lightweight building material that was also capable of transferring current. And therefore information, he mused. Inset into the walls were holo panels and then little shiny discs now and again, plus laser lights.

He was going to have fun figuring out all the stuff on this base. He suspected it was less of a building and more of a cyber entity, living, breathing and thinking at the highest level. Even as a genius, he felt that comprehending even a fraction of how this complex base worked was going to be amazingly tough.

They passed a bunch of other doors to rooms or labs or ancestors-knew-not-what, and then Brock entered the meeting room where the other members of the team had already assembled.

“So…what? This guy is going to show up in person then?” Joel was asking Molly.

Joel checked the time on his holo.

Paige, Pieter, Crash, and Brock filed into the room and took seats around the conference room. The room was comfortable, soundproof and probably a lot of other things. It was Brock who noticed that the chairs they were sitting on didn’t touch the ground.

“Booja!” he whooped jovially when he realized. “Antigrav chairs!”

Everyone’s heads disappeared below the table as they looked under the chairs to check out the discovery. All except Molly, who bounced up and down, wondering how they were calibrated for the weight on them.

Paige sat up and managed to catch Molly’s attention. She was about to launch into a bunch of questions when the audio system clicked on.

“Greetings of the day be upon you, as you say in your system.” It was the voice.

Molly tapped her ear to signal that they needed to focus, looking at Paige. She needn’t have bothered. Paige was already peering around for the voice. Or speakers.

In fact, Crash, Paige and Pieter all looked stunned as they heard the man for the first time.

“First, may I introduce myself?” The sound came from everywhere at once.

Paige’s eyes continued to flicker around the room, and she looked a little disoriented.

A hologram materialized in the center of the table, then moved to the wall and spread itself out to create a three-dimensional screen. The high-tech holo screen flickered and then enlarged again before displaying an eerily real hologram of a young-looking general.

My name is General Lance Reynolds. Previously of the Etheric Empire, presently I hold a high position in the Etheric Federation.”

Paige, mesmerized by what she was seeing and still in a state of awe, raised her hand and waved at him.

Molly looked shocked. “You know her name?” she asked, suddenly wondering what else he knew.

Lance was still smiling. “Of course. I know all your names.” He looked in the direction first of Crash. “This is Chris Ashworth. Call sign Crash. Pilot and accomplished collector of Spaceport fines.”

Molly shot Crash a look, suddenly realizing that all the bitching he’d been doing over the Spaceport fine when they first had to skip the planet in a hurry wasn’t actually his first incursion.

Lance continued. “Then we have Joel Dunham. Former Space Marine for the Central Sark System’s military. Now your Second-in-Command.”

Joel nodded, as if he were being introduced on a game show.

Lance moved on to Pieter. “And then we have your newest recruit, Pieter Alexander, a computer genius with a misspent youth, but a boat load of spunk when it comes to code writing…, and commenting on rewrites.” Pieter blushed. Molly watched him carefully. There was clearly something Lance knew that she didn’t. She filed that one away for later too.

“And then we have Paige Montgomery, former kidnap survivor, former cheerleader, and former personal assistant to the former Senator. Now she keeps this place running, but she’s secretly biding her time before she can build her own empire and change the face of fashion in the Central Systems.”

Molly’s eyes suddenly locked on Paige, surprised by the General’s last comment. Paige’s chest went a deep red, and her eyes focused hard on the table. She looked like Lance had just shared her deepest secret with the class.

The General wasn’t done. “And then we have Molly Bates, ejected from the Space Corp for a 4077.” The entire team stared at her, their eyes wide. Molly kept her eyes fixed on the holo of Lance, but she could feel the weight. Her breath became short, and embarrassment swelled in her upper chest. She couldn’t see him, but she could swear Joel was smiling a little.

“So what’s your point, General? You know everything about us. You’ve probably been reading our diaries. So what?” Molly found her courage as she spoke, even though emotion denied her enough air for her vocal chords. “Why are we here? What is this place? And why did you suddenly give us access to this little set up of yours?”

She paused for a moment, catching her breath.

Lance opened his mouth to answer, but Molly didn’t stop there.

“And is this shit all Bethany Anne’s? Does that mean she’s coming back? Or did you steal it from her?”

From Ellie >>>   Yoda ism. Yeah, he actually said this

10 PM CT, deep into the arguments around why it’s likely we’re living in a simulation, MA kinda lost the plot.

I didn’t “kinda” lose the plot. I kinda went off on a tangent related to why it would be impossible for computers (At this stage) to provide the verisimilitude necessary for even a small amount of humanity to be in a simulation.  Anyway, the below was when I finished up my second version (explanation) on Resolution…

MA: So that was a clarified answer that was simplified.

MA: Hell, that was redundant.