We’d like the Kurtherian Gambit Universe to meet M. G. Herron. Matt’s a friend and member of the 20booksto50k Facebook group, and the author of Tales of the Republic, a sci-fi action thriller releasing today.

If the blurb below interests you, click the link at the bottom to check out Tales of the Republic 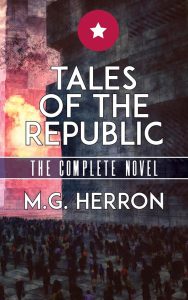 TALES OF THE REPUBLIC

The fate of the Republic of Enshi hinges on a genetically modified miracle–and three unlikely heroes.

Kai Ming, a troubled politician, is entrusted with the country’s only hope of ending the famine that decimated the population. Po Li, a scrappy farm girl, battles to be reunited with her sister after rebel insurgents tear them apart. And Ari Klokov, a soldier, wakes in an underground prison with strange biotech in his head and no memory of the last twelve years.

Thrown together in the chaos and united by a fierce love for their country, Ming, Ari, and Po have to cross the mad riots, outsmart the hawkish Senator Khan, and overcome Felix Hull and his tenacious rebels who wage war in the streets of the blasted city.

Learning to trust each other is a start, but it won’t be enough. Their resistance pits them against ruthless leaders on both sides who harbor designs on the halls of power. Ming, Ari, and Po need to stop them to survive, but every opportunity has a cost–and this one must be paid for in bodies and blood.

Tales of the Republic is a sci-fi action thriller by bestselling author M.G. Herron. Originally written and serialized in 7 parts, this book collects all parts into a complete, standalone novel.

What readers are saying:

“Herron conjures a stark view of the future with unexpected twists.” – Amazon Reviewer

“There is hope, but the action is dark and brutal.” – Amazon Revieweron