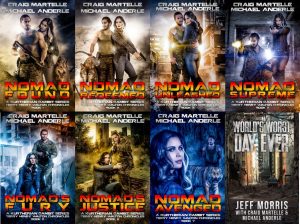 Twenty-five years ago, Joseph had excused himself and gone to sleep. He woke four years later, refreshed and famished. When he showed up in North Chicago, he discovered the growth and general happiness of the people. They had not welcomed him freely, but they hadn’t shunned him either.

He found Terry and Char and the youngster called Cordelia. She had a wolf’s ears but also a sparkling personality.

Terry had greeted Joseph like an old friend. “You asked us to have a cow ready for you. We can do that. Load up, Joseph!” They took the dune buggy and with Joseph standing inside the vehicle, hanging onto the roll cage, they headed out, leaving the town and traveling the rough roads of what used to be residential streets.

They continued west for a few miles before Joseph smelled the burgeoning stockyards. When they drove up, Joseph saw the sign–‘Weathers and Sons Prime Beef.’

He smiled to himself. Labels. Even in the world after the fall, they still had labels.

“I suspect that this is the best beef around?” Joseph asked. Terry laughed fully.

“You would suspect right,” Terry answered, slowing as the dune buggy bounced over the cattle guard.

An old man working on the side of the road motioned for Terry to stop.

“See, Betty? See? I didn’t do nothing, and this young whipper-snapper is making trouble!” the old man claimed. He turned back to Terry Henry and gave him the finger. “You can suck my ass, young man!”

Char’s purple eyes grew huge and started to glow as she looked at her young daughter. Char climbed from the dune buggy and stalked toward the old man. He raised a shovel as if he was going to hit the tall and beautiful Werewolf.

She ripped the shovel from his hands and threw it away. She grabbed his ear as if he were a small child and dragged him to the dune buggy.

Joseph watched in good humor, not saying anything because he didn’t want to be on the receiving end of a Char tirade. He’d already been there, and it hadn’t turned out well for him.

“Apologize this instant, Lester, you curmudgeonly old bastard!” She forced his face close to the dune buggy.

“I’m sorry young miss. I didn’t see you there,” he stammered.

Cory leaned out of the dune buggy, took his face in both her hands and kissed him on the forehead. His features melted into a smile.

“I’ll make sure nothing like that ever happens again, princess,” he said in an old, but tender voice.

He bowed, nodded to Char, and walked away to retrieve his shovel. Betty was happy that she didn’t have to give Lester the big hairy what-for. She hurried to the dune buggy before it drove off and gave Char and Cory hugs.

“Don’t mind him,” she said, shaking her head and smiling warmly. “Thank you for all you’ve done for us. It’s nice living among people again and not being afraid.”

She waved as Terry drove toward the large barn. Joseph was hungry, and he could smell the warm blood.