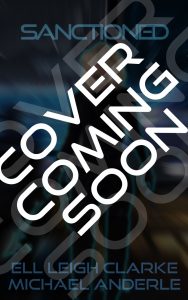 I can’t quite believe that the General has given me the opportunity to be in touch with you.

This may not come as a surprise, but you’ve been an inspiration to me my whole life. Growing up as a geek I was isolated and alone. I would spend my hours researching the dark recesses of the XtraNET to access information about you, your missions and what you’ve done to bring together the Etheric Empire.

I’ve realised in recent weeks though that the information available in the Sark System was incredibly limited. And probably inaccurate. Your name is whispered as a warning to kids who wont eat their vegetables, and amongst criminals who tempt vengeance.
I found it hard to believe that someone who was so driven by justice would be quite so ruthless.

Since meeting your father my suspicions have been justified. I’m starting to understand the sheer scale of the Etheric Empire and what you’ve had to do to create it. You inspire people to follow you, without even being in the same galaxy, for time scales longer than a single life time. You’ve inspired people to lay down their lives in service to the cause.

No monster can do that.

Just catching the glimpses that I have about what the Etheric Empire is, I’ve been inspired. Inspire to do more. To make more of a difference in the world. To take on bigger challenges.

And still, when I look at all you’ve achieved, and all the lives you have touched and transformed, I can’t believe that I could do anything like this. I have a small team: a handful of good people right now, and honestly I’m struggling.

I don’t know how to be the leader they need right now, never mind the leader I will need to be for what may be to come.

And besides, who am I to lead them as broken as I am?

I don’t know if there is an answer to this question, but given the opportunity to write you I thought that if anyone had any wisdom to share on this topic, it would be you.

Forever in your service.

Captain Jack Nolan sat awkwardly on the other side of the conference room table. All her years in the field had made her adept at combat, strategy, and commanding troops. She was a decorated officer, and knew how to rain hell on her enemy. As a larger human, she had the strength to rival even the bigger Estarians on her teams, and had kicked the ass of many a superior rank in her military training, literally – and figuratively -in, well, everything.

She also had a reputation for taking no bullshit.

Nothing had prepared her for this, though.

The woman they called “the boss” sat across the conference table, watching her. Every now and then she would make a facial expression like she was having a conversation that no one else could hear. She was geeky, that was for sure; but it seemed like she’d been transplanted into the body of… a cheerleader, and just forgotten.

The commanding officer who had recruited her from Estaria and brought her up to this secret asteroid base sat beside the woman, asking the questions. That was strange in itself, since she was told she already had the job.

If she wanted it.

“What would you say is your biggest weakness?” the officer known as Joel Dunham asked her.

The woman held up her hand to interrupt him. “Actually, I need to ask something.” The geeky-cheerleader hybrid glanced over at Dunham. “Sorry – do you mind?”

Dunham waved his hand obligingly, granting her the stage.

The boss looked at her, a small frown across her eyes and forehead. “I’m sorry. I have to ask,” she began. “But why do you call yourself by a man’s name?”

Jack had been wondering how long it was going to take before someone asked her that. She took a deep breath.

The boss looked a little uncomfortable asking her own question. “I mean,” she continued quickly, “it’s okay and all. We accept people exactly as they are, for who they are, here. But you, er… you seem female.”

Jack smiled in acknowledgment. “I am. But my father wanted a boy, so he raised me as a Sarkian would raise a boy – with martial arts, gun training, and hand-to-hand combat. And he called me Jack. My mother had planned to call me Jacqueline.”

The woman sat back, her face relaxing. “Ah. I see. That makes sense.” She looked at her colleague, and was about to let him continue. Then she did the face like she was talking to someone else.

She seemed to change her mind, and glanced back at Jack, and stood up. “Okay, so the job’s yours, if you want it. We’d be glad to have you on the team.” The strange woman walked around the conference table to shake her hand.

Jack stood up, bewildered, and took the handshake. She glanced at Joel, who still had holo screens out and was mid-interview or mid-conversation… or mid-whatever this was – and looked equally thrown by his colleague’s behavior.

The boss woman turned towards the door and started heading out. “You can manage from here, right Joel?”

Joel turned to watch her leave. “Er, yeah. Sure thing, Molly,” he agreed.

Jack, unsure as to whether she should speak her mind, decided to anyway. “Wow. Ghosted!” she exclaimed, a little humor in her voice, as she tentatively sat back down.

Joel grinned. “Yeah. You’ll get used to that. She er… struggles with the social element sometimes.” He chuckled a little. “Don’t worry, she’s great when you get to know her. She was probably juggling a few things at once, just then.”

Jack frowned a little. “Juggling? What do you mean?”

Joel relaxed a little and leaned forward on the enormous conference table, as if letting Jack in on the joke. “Ah, she has an AI in her head. She may have been given intel, or something she needed to act on right away.”

Jack looked like she understood. “Ohhhh” she mouthed softly, smiling in appreciation at being let into the fold.

The door to the conference room whooshed open, and a huge muscular guy walked in, making even Dunham look weedy in comparison. “Molly said you guys were ready to start orientation?” he said to Joel.

He glanced over and smiled at Jack.

Joel swiveled around in his chair and sat forward, leaning his arms on his knees. He glanced back at Jack, then back at the muscle guy. “Yeah. We’re good, I guess. That is…” he turned back to Jack. “You want the job, right?” he asked.

Jack shook her head, confusing Joel for a second. “Hell yeah,” she smiled. “I’m in.” She smiled to herself. “Heck, if you guys are even half as crazy as the rumors say you are, and with even a fraction of what I’ve seen in the last few hours getting here, and all…” she motioned to where Molly had been sitting. “I’m in for anything!”

Joel stood up as the new guy walked around to the other side of the table to introduce himself. “Well, in that case, I’m Sean Royale. I’ll be your liaison between normality and crazy.”

Sean held out his hand. It was huge. Jack, who had been known to put a large number of marines on their ass in various forms of arm wrestling, took his hand, and made the smart move to not try and prove anything. “I’m Jack,” she told him, shaking gently.

The pair looked over to Joel. Joel closed out his holos. “Okay, so if you guys are good, I’ll go catch up with the lady boss. Squad training in two hours, yeah?”

Sean nodded. “We’ll be there.”

“So,” Sean reflected, looking at Jack. “You don’t seem the normal commanding officer type. How did you end up getting selected for this crazy house?”

Jack shrugged. “Long story. But yes, not your normal CO. I had a knack of winning in the military; they had no choice other than to promote me. That’s where I discovered I’m not the natural administrator.” She cocked her head contemplatively. “So I think this level of crazy mixed with field work is going to suit me just fine. As for how I got selected…” she gestured towards the door, “You’ll have to ask Captain Dunham.”

Sean motioned for her to lead the way around the conference table. “Well, in that case, let’s introduce you to your team, and the base of magical adventures!”

The two headed out of the conference room.

Jack allowed herself to grin broadly only once his back was turned. She followed Sean out of the conference room.

FROM ELLIE >>>  This is from a conversation I had with “Yoda” yesterday.

Now, for Michael’s turn at deciphering this (meaning, I get to say my part…)

Ellie: I feel like I haven’t had a weekend.

<<Why?  (she tells me) Ok, I understand (and I am sympathizing with my collaborator)>>
MA: that’s because you wrote 20k words.
Ellie: I spent 8 hours watching Vampire Diaries from the beginning on Saturday.

<< Now, I’m thinking to myself “Vampires…we have vampires in The Kurtherian Gambit. How can I make her feel less guilty about taking the time to just enjoy herself a little?”>>
MA: Ah cool. It’s research.
Ellie: Uh huh. (Author doesn’t mention it’s the second time she’s watching it through…Allows conversation to move on.)