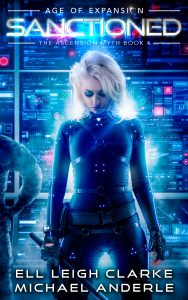 Joel stood in the doorway, watching her press buttons and rattle at panels and levers that didn’t want to budge. “Stressful day, dear?” he asked.

Molly looked up and glared. “It would be fine if I could get this fucking heap of trash to cooperate.”

She turned back to the machine.

You’re trying to process a fresh cup, but there is already an empty pod in there.

Molly grappled with another panel on the machine, and managed to pull it open. She peered into the little compartment that had popped out and dug out a crinkled piece of plastic. Dumping it in the trash, she turned back to Joel.

“Well, that couldn’t have gone much worse,” she said.

Joel watched her, amused. “You’re talking about making a first impression on your new team member?” he clarified.

She scowled at him.

Joel grinned. “I think you did perfectly. She now knows exactly what she’s getting herself into…” He couldn’t help but chuckle silently, his shoulders and chest bouncing in amusement.

Molly slammed the panel shut and put the mug back under the machine. “I’m glad you’re amused,” she retorted, poking at the button on the machine again.

Joel, still grinning, pulled out a chair at the kitchen table and plunked down. “Okay, let’s see what we can do about this leadership thing. I mean, you were doing so well! What, with finding a way to keep Crash from going crazy, and listening to the others about what they need to be motivated and engaged on this isolated rock.”

Molly turned and leaned against the counter while the machine whirred and did its thing. “Yeah, really great… You know that Crash hasn’t been using the pods just to get his cabin fever ya-yas out?”

Molly folded her arms. “Yeah, he’s using his pod time to go and see some chick he’s been talking to on the other side of the asteroid.”

Joel looked confused. “But Paige said he’s been more relaxed since he had pod time.”

Molly raised her eyebrows knowingly. “Well…” she paused, waiting to see if the penny would drop. When Joel showed no signs of putting it together, she moved on. “The point is, this ‘motivating the troops,’ or, more precisely, training and managing them, bites.”

The machine fell silent and she picked up her mug. “You want one?” she asked Joel, indicating at the machine.

He shook his head. “No thanks. But this management thing is just something you need to work on. No one – well, very few people – are able to just do it naturally. Why do you think the military invests so much in leadership training, and personnel development?”

Molly sat down on the other side of the corner where Joel had placed himself. She hugged her mug with two hands and shrugged. “Dunno. I can see it’s important. But I just don’t know where to start.”

Joel leaned forward, resting his arms on the desk. “You’ve already started. Now we just have to keep refining,” he told her. “So, why don’t we talk about finding out what really motivates them?”

Joel took that as a sign to continue. ”Alright, so let’s take Pieter. He’s an odd one. He’s not a soldier. He doesn’t do this for the pride. Or for justice. But he does care about his team. What do you think he struggles with most, though?”

Molly wracked her brains. Her eyes fell on the rim of her mocha cup. “Not gambling?” she guessed.

Joel shook his head. “No. The gambling was a symptom. His biggest challenge is being able to connect and bond with people.”

Molly frowned again, and moved her gaze forward to the wooden table, still not looking at him. “How do you know that?”

Joel tilted his head. “You remember when we had that post-op pizza fest, where you announced Maya was joining the team?”

Joel sat back in the chair and crossed his legs in a four shape. “You remember how Pieter lit up when Sean ruffled him, and bear hugged him?”

Molly took a sip of mocha. “Yeah, vaguely,” she said after swallowing.

“Well,” Joel continued slowly, “that was a breakthrough moment for Pieter. He suddenly felt accepted.” He tried to catch Molly’s eye. “Haven’t you noticed how since then, he’s been hanging out with the others more, and coming out of his shell?”

Molly glanced up at Joel. “Yeah, he’s become more of a smart arse too!”

Joel grinned. “Exactly. Cuz he’s comfortable with the team now. He feels accepted, like he can be himself.”

Molly started to smile a little. “I see. That’s… great.” Her eyes developed a distant look for a moment. “So, how does that help me manage him?”

Joel nodded his head and started waving his hands in explanation. “What it means is that he craves connection. So your job as his leader is to make sure he finds opportunities to keep developing that. That’s why on the training exercises, I keep pairing him with either Paige or Brock. They’ve bonded already – so I keep giving them the opportunity to make that bond deeper. Eventually, he’ll start naturally spending time with the others, too… But to force him out of his comfort zone before he feels ready to, will just keep him struggling and feeling like an outsider.”

Molly pushed her mocha cup forward and let her head hit her arms in front of her. “I don’t know how I’m ever going to do this voodoo you do,” she exclaimed.

Joel put a hand on her arm. “It’s okay. You’ll get it. It just takes time. And practice. How about you have a conversation with Maya next, and see if you can work out what’s important to her? You know – what she hopes to get out of being on the team. What she wants to do with her life. That kind of thing.”

Molly lifted her head, stray hairs flopping over her face and into her eyes. “Yeah. I can do that. I guess.”

Joel took a breath. “Good. That’s the next thing then.” He stood up. “Okay, we’re due in training in a couple of hours, and I have some case files to go through. See you down there?”

Molly had put her head back into her arms. “Yeah…” she said, muffled through the table and sweatshirt arms.

Joel shook his head, and tucked his chair back under the table. He patted her head gently. “It’ll be okay. Promise.”

You have a meeting with the General in ten minutes.

Molly lifted her head and pulled her mocha closer. She examined the contents of the cup, her nose wrinkled.

What the fuck is wrong with this mocha, Oz?

I don’t know. Take another sip.

Molly took another sip. She paused.

What’s up with it?

Erm. You might not want to drink the rest.

You don’t need to know. Just throw it out.

It’s not good. Just throw it.

Molly’s head hit the desk again, in exhaustion and exasperation.

So, I’ve been saving little snippets of my conversations with Ellie because … Well because I would forget otherwise.  If I forget, then she has the better memory and my Author Notes don’t truly express my version of the truth.

Which, you know, is the right version.

Here is one from my vault:

Ellie: (Talking about her being in New Orleans) So, I’m learning all of this stuff on French (New Orleans) and after an hour, it’s a great sensation because your brain is laying down all of these new neural pathways…
Mike: (Interrupting) It’s like a runner’s high?
Ellie: Right…
Mike: Not like I run, either…
Ellie: (Shaking her head) Running is like an acquired taste…
Mike: Kinda like vegetables… 😉
One more:
Ellie: Does a two finger gesture for something I must have said… Although I’m sure she was being overly sensitive as I’m always polite and respectful.
Mike: <Looking puzzled.>
Ellie: <Recognizes I’m not catching on> What is the American one finger gesture vs. the English two fingers? You don’t know it?
Mike: <looking at her a moment> What, I have to learn Queen’s English Finger Gestures now???
As you can tell, collaborating with a British Author has it’s own version of challenges.
TagsEll Leigh Clarke Sanctioned The Ascension Myth