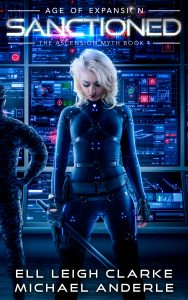 Joel sat in a pod on the hangar deck, having carefully selected one that was turned away from the main walkway.

He’d wanted a quiet word with Oz, and the small space, coupled with the audio integration, meant that he could easily have a two-way conversation with Oz here; better than anywhere else on the base or in the safe house.

Joel waited until the pod door was firmly closed. “Heard you accidentally let ADAM know what the plan was?”

Oz’s audio channel cracked open. “Yeah. Won’t be making that mistake again. She was not pleased.”

Joel’s voice was sympathetic. “Yeah. She’ll get over it. I don’t think it was a big secret, anyway.”

Oz’s voice didn’t convey that he was overly concerned. “Yes. I think I’d agree with you. My Molly mood-heuristic has her being completely back to normal with me by the time the group meeting is over.”

Joel’s tone was incredulous and amused. “You’re kidding! You model her moods?”

Joel thought for a moment and leaned back in his seat, leaning one elbow against the side of the capsule. “Wow. But what for?” he asked.

Oz’s tone was matter-of-fact. “Wouldn’t you like to have a heads up on how she is going to react to something, instead of sitting around and waiting?”

Joel chuckled, hardly believing his ears. “You mean you can make predictions that are accurate?”

Oz’s voice conveyed that he had realized that Joel was impressed by his operation. “Yes; within a certain tolerance, of course,” he answered, a little pleased with himself.

Joel shook his head, and whistled a little through his teeth. “You’ll have to tell me more about that some time.”

“Well…” Joel started slowly. “It’s Sean.” He paused a moment. “Well, it’s not Sean,” he corrected himself. “It’s me. I mean, I’m used to being surrounded by competitive jackasses; but normally I can hold my own. But Sean,” he sighed, “he just has too much over me.”

Oz’s voice revealed he would have been smiling. “Ah yes, his enhanced capabilities,” he confirmed sympathetically.

“And you’re wondering what I might be able to do to help?” Oz checked.

Joel nodded, shifting his elbow, which had been slipping down the side of the pod. “You read my mind, Oz.”

Oz chuckled. “No – just your heuristic.”

Joel frowned, and sat up straighter. “You’re kidding?” he asked, half impressed, half disbelieving he warranted that much trouble.

“Yes, I am kidding,” Oz confessed. “I haven’t modeled your behavior formally. But, to be fair, you’re not as erratic or complex as Molly, so…”

Joel laughed to himself. “Yeah. I hear you,” he agreed, his attention drifting off as he remembered some of her infuriating complexities. He shook his head, bringing himself back to the conversation. “So, what do you think you can do for me?” he asked.

“Well,” Oz conceded, “nothing from your current installations… But,” he continued, “if we could acquire some additional implants and tech, we could do a heap of stuff.”

“What exactly are you looking for?” he clarified.

Oz chuckled. Joel could feel the slight vibration of his laughter through the seat of the pod.

Oz’s voice was still bouncing with humor a little. “Nothing. Just funny how male humans compete!”

Joel dropped his arm from where he had wedged himself and was almost up out of the seat in protest. “I’m not competing. I’m… I’m…”

Joel deflated, and slumped back into the chair. “Okay. I’m competing,” he admitted, flushing an even deeper shade of pink. “But it will also be good for the team,” he added weakly.

Oz chuckled again. “This is true,” he concurred. “Which is why I’m going to help.”

Oz went quiet for a few moments. Joel shifted awkwardly in the pod, still feeling a bit hot around the face.

Finally Oz spoke again. “We’re going to need a set of implants, which I’ll have ordered up on the next shipment. And you’re going to have to bring Brock in on this.”

Joel nearly shot out of his seat again. “Whaaaa?” he blurted. “Brock? Why him?”

Oz’s voice was steady, with a hint of irony. “He’s the only one of us with a body who might have the necessary skills to implant the devices we’re going to need.”

Joel settled a little, huffed, and wedged his arm back onto the side of the pod for comfort. Then suddenly, he looked suspicious. “Hang on,” he stalled. “Where exactly are these devices going?”

Oz sounded more clinical now. “We should have a stimulator-cum-relay at the bottom of your brainstem, and then one on the outside of the cortex.”

Joel did a double-take, glaring at the heads up display in front of him, as if he could eyeball Oz. “You what what?! You’re talking about Brock doing brain surgery on me?”

Oz sighed. “Well, yes. Technically. But no need to be so melodramatic!” he exclaimed. “The one in the brainstem can be injected, and it will settle in place. The one in the cortex will go in around your temple, where the bone is thin anyway,” he explained somewhat flippantly.

Joel went pale, the effects of any blushing completely neutralized.

Oz continued. “It will be fine. Brock has more than enough dexterity to take out a tiny slice of bone, put the implant in, and then replace the bone and let it heal up,” he reassured Joel. “You’ll hardly feel a difference once it’s in…” He paused, and then qualified his statement. “Unless it overheats.”

Joel’s voice jumped a few octaves. “What do you mean, ‘unless it overheats’?” He suddenly remembered himself, that he was trying to keep his presence in the pod a secret.

Oz pulled up a simple diagram from the product page of the device he had located on the XtraNET. “It’s a slight risk. If the chip doesn’t go into precisely the right amount of tissue, it won’t be able to run the signal, and so it might heat up.”

The area around Joel’s eyes rumpled in confusion and frustration. “In which case?” he pushed.

Oz remained clinical. “In which case, we simply remove it and try again.”

Joel shook his head in disbelief. “Oh, right, so no big deal, then.”

Joel looked out onto the hangar deck, away from the brain diagram. “I was being ironic,” he told him.

Joel was silent for a moment, thinking through his options. He could always not have the procedure and just keep working out. But then he’d never have Sean’s reactions. Or speed. Or strength.

He sighed. “Okay, so I need to have a word with Brock at some point, then?”

Oz’s channel had gone quiet. Hearing Joel’s response, the audio opened up again. “Yes. I’ll let you know when we might expect these parts though.”

Joel leaned forward to grab the handrail and pull himself out of his seat as the door opened up again. “Okay, great. And thanks, Oz. I appreciate you helping me.”

Joel grinned and hopped out of the pod quietly.

Before closing the door, he peeked around the hangar, just to make sure no one was around. Satisfied, he waved his hand in front of the access panel, and the transparent door slid quietly down.

Joel crept for a few strides, and then stood up straight and walked casually back to the main thoroughfare around the outside of the hangar deck.

Sean Royale, you cocky son of a bitch. I’m going to show you and your cyborg ass who can shoot, he thought as he climbed the stairs two at a time back towards the demon door corridor.

FROM MICHAEL >>> So, Ellie is working through last minute JIT stuff on the book, and she allowed me to have this last author notes on the final snippet before the book releases tomorrow.

This book is fucking awesome. When we laid out the whole 12 book arc, each “4” books is a natural stopping point if we got it wrong, and the fans just don’t want anymore books. So, we had a natural ending that could have occurred.

Thanks to the amazing response from you, the readers, we are pushing for book #5 to release in about 3 weeks or so.

However, let me warn everyone that Ellie has had a rough time with health (caffeine – see her Facebook page) among other things, so that could slip.  I would rather she have the option to “go for it, and then adjust” than drag herself too far down.

However, I tried to warn her to push it back, but … Yeah, SHE’S GOING FOR IT.

Now that I’ve said something supportive, let me go find another ‘note’ … It’s time for

“TRAVAILS OF WORKING WITH A BRITISH COLLABORATOR.”

(An ongoing series all by its fucking self.  A comedy in 12 parts.)

Setup:  By now, I know that Ellie is a (literal) genius.  Physics, business, IQ God knows where.  However…

(You knew there was a ‘however‘, right?)

However, I was chatting about something and the conversation gets around to a piano she owns, or did own, or something and I find out that she is a very good piano player.

#SONOFABITCH – The best ‘playing’ I can do is (now) tell SIRI or ALEXA to “Hey Alexa, play <Insert Band Here>”.  I used to say hit the play button on the radio, but I don’t even do that, now.

Not that my, by now, mute ego was saying, “Seriously?  Seriously?  She fucking plays a goddamn piano as well?  What the fuck else?” Or anything…

But it was, it totally was.

Anyway, we are having this conversation, my (now not) mute ego was bitching in the back of my mind as we carry on our talk when we have this snippet of conversation:

Ellie: (in her British Accent) The Cello is a completely other musical instrument, it opens <other mind paths or some logical and sciency stuff… my ego was already starting to whine and it was hard to listen to two voices at the same time>.

Mike: Are you going to tell me that you play multiple instruments?

Ellie: No, I wasn’t going to tell you that…