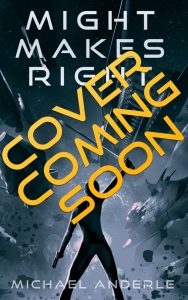 The two women set up near their favorite tree. It had grown in the years from when they had first used it as a backdrop for their reports, but it was still recognizable.

One woman ran a hand through her hair, the other winked at her from behind her HUD Reporting setup.

Not that Giannini could see Sia’s wink.

There were a total of five drone cameras around Sia, with one high overhead getting the setting shot.  Giannini would always be amazed at Sia’s ability to control so many input streams.

“Hello,” Giannini spoke to Sia, “My name is Giannini Oviedo, and I’m coming to you from the Mark Billingsly Park inside the QBBS Merideth Reynolds inside the Etheric Empire. This is our first report before additional Etheric Empire’s ships leave to further support the Karilleans in their fight with the Leath.”

Outside of the view of the camera’s, two men glided through the tree’s, their eyes flicking everywhere, searching out everyone and looking for anything that might give them the hint the two women were in danger.

Giannini continued speaking over the top of some action video of a battle. “We will have an interview with the Empress later today, but we were able to confirm the video’s that have circulated of her activity and actions on the Yaree’s or Karillian’s home world are correct. Empress Bethany Anne, Stephen, Gabrielle, John Grimes, Eric Escobar, Darryl Jackson and Scott English are seen in these video’s fighting the Leath from an odd pyramid structure in a jungle.”

Sia cut back to Giannini only, “Now, we have video provided by Cheryl Lynn taken from the HUD of those fighting.” Giannini looked straight into the camera.

“If you are bothered by violent death, please turn your channel now.”

“We are,” Admiral Thomas answered Bethany Anne’s question, “probably outmatched on ships production by 50% in ships hulls and 80% on existing tonnage.”

The Admiral listened to an update, thought about his response and added, “The ships are, class by class, close but not equivalent to our capabilities. However, with their numbers and very little luck, they could take us in a major action so long as it is not here in our system. We are dropping puck defensive satellites as quick as we can right now.”

“How many attacks,” Bethany Anne asked, “have we had in Karillian by them in the last four months?”

“Three,” he answered. While both of them knew these answers, the many operations people in the large meeting room were put on notice. They should know all of this information as well. It wasn’t as if most didn’t know, since the updates for each attack by the Leath into Karillian space were shared, but tiny questions like these helped everyone focus on the questions at hand.

“Another one in?” She asked.

TOM, why are they so predictable?

The Phraim-‘Eh clan are very regimented in their belief system. However that major clan is broken down into five smaller clans. One of them, the K’gurth, are regimented to a fault.

That is a Kurtherian assessment?

No, that is a Kurtherian with years and years of working with humans assessment. Most Kurtherian’s would see the symmetry of the math and revel in it. So, we would, perhaps, love the math and believe that the math is sacrosanct, to mess with it would upset the meaning of the accomplishments.

So, they won’t change?

We don’t know that it is the K’gurth clan, it might be one of the other four. Even so, it depends on how much the Leath themselves believe in the rightness of the plan, before they change it.

Well, that’s annoying that it could change at any time.

She spoke to the group, “TOM says that the likely clan of Kurtherian’s behind the Leath revel in the math of symmetry. However, we can’t absolutely depend on them always being so regimented, as the Leath themselves might have more leeway with what they choose to do.

Hey. That’s what we said!

Actually, ALL of us are working, or down sick.  Well, except that CM Raymond – He is going on vacation (I joke, he will have his words complete before he leaves Saturday for us.)

Even Andrew Dobell is slamming together covers for us at an alarming rate as he and his family go on vacation for the last third of July.

Speaking of Andrew, many of you know that when I met him, he was a doing many different jobs (primarily wedding photoshoots) to keep his family fed. However, what he wanted to do was produce stories and work on creative projects for his artwork.

At the time we spoke last year, he had one book out (and the book been out for a while, not producing income) and was working on his second.  Fast forward fifteen months, and Andrew has completed two trilogies, has just finished his LAST wedding shoot and is looking forward to another productive year (again, thanks in large part to YOU).

Sorry ladies, but when you are newlyweds, some of you can cause a wedding photo person to lose all of their hair… (Wait, that’s not a comment on Andrews going bald or anything, right?)

ANYWAY… I want to let those who are following Andrew’s career know that his ELEVENTH TITLE is out (he even has a coloring book) – This book is The Prometheus Trap! 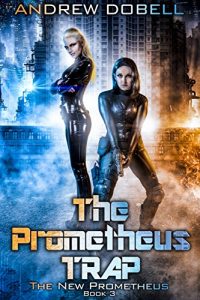 It was a routine mission, saving some more victims of the Corporations greed, but it turned into a nightmare. Now you’re alone, separated from your team, with a superior cybernetic killer hunting you down inside a building from which there’s no escape, could you survive?

The Nano Liberation, instigated by Frankie and her team at the A.C.T. freed billions from the tyranny of the Corporations rule, but the Corporations aren’t going to go down without a fight.

While the former victims of the Corporations rule start to stand up for themselves and fight back, the Corporations move to regain their power, killing these innocents and blackmailing officials.

Frankie and the A.C.T. find themselves stretched as they try to respond to every report of Corporation violence. When they head into the Undercity, into one of the huge support buildings, it seems like just another mission, until the ambush.

Outclassed and outgunned by cybernetic mercenaries hired by Psytech, Frankie finds herself separated from her strike team, trapped inside the building and disconnected from the outside world.
Now she is being hunted down by Hellion and her team, an elite strike force that will stop at nothing to kill Frankie.

Now Frankie must survive in a hostile environment, find her team and somehow find a way to fight back against a bigger, superior and bloodthirsty mercenary group.

This new Cyberpunk action thriller, the third book in The New Prometheus Series, is available now!

CLICK HERE to read / review the inside or buy at YOUR local Amazon: books2read.com/PrometheusTrap