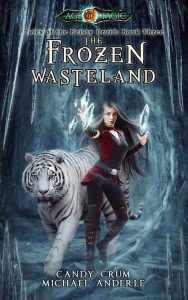 Cathillian, Samuel, and Celine stood just outside the area where the sparring groups were practicing that morning as they discussed their situation. Echo had just returned, having scoured the entire southern third of the valley, but she had come up empty.

The golden eagle had searched everywhere from the Dark Forest to the border of the Madlands just outside the Arcadian Valley, and all the way down to Craigston. Fruitless.

Arryn was nowhere to be found.

They had some theories, but mainly they would just have to start looking again. Cathillian, however, had other plans.
“It’s been too long since I’ve sent Echo to the Dark Forest. If I don’t do so very soon, my mother will come here. Arryn and I joke about it quite often, but neither of you seem to realize just how serious a problem that would be. She would not be happy.” Cathillian ran his fingers through his hair, securing it into a ponytail.

Cathillian shook his head. “Can we stay on task, please? This is kind of important. And of course, he treats me nicely. He treats me like a princess, which is more than I can say for you.”

Despite the grim conversation, Celine couldn’t help but laugh. The two were always giving each other a hard time.
“Maybe you should send Echo back to the Dark Forest,” Celine said. “But what message would you send? That’s the real question.”

Cathillian shrugged. “I’ve thought about that over and over again. I don’t have a clue what I should do. If I don’t send word, I can pretty much guarantee my mother will be here within the next two days. If I lie and say nothing is going on, I’m going to feel terrible, and the truth is, we might need her. If I tell her the truth, I don’t know what will happen.”

“We might get an army of pointy-eared fellas like yerself,” Samuel said. “We can use all the help we can get. We need ta find our girl.”

“We’ve been lucky up until now,” Cathillian said. “The only thing that’s kept us from getting our asses handed to us is the fact that Amelia is still temporarily in control. The city is on the verge of breaking. If anything else were to happen, Amelia could quite possibly lose whatever hold she has, and Talia would take over. If that happened, the Guard would have no choice but to come for us.”

“Then why are we still here? Shouldn’t we be on the move?” Celine asked.

“As much as I’d love to say yes,” Cathillian began, “I’ll have to say no. Not in the traditional sense, anyway. If I leave, I’m going back to the Dark Forest. I’m not going to stop until I can bring back an army. Problem with that is, there’s now a potential war brewing in the Dark Forest as well—if what Jenna told me was true. My mom has been lying to me just as much as I’ve been lying to her. If they send any warriors, they risk their own walls being vulnerable. The truth is, we might not get any help at all.”

Everyone sat in silence, watching the guardsmen practice the skills they had learned. Samuel and the rest had grown to trust them, and they hadn’t been affected yet by Scarlett’s influence.

After a few moments, Cathillian spoke. “I’m going back to the Dark Forest—I don’t think there’s any way around it. Like I just said, Amelia’s hold on the city is fragile. We need to be ready if it slips entirely. I’m gonna take a day or two to get my things together, but then I’m heading out. I need to tell my mother and grandfather what’s happened. They need to be informed, and they have every right to know that Arryn is missing.”

Cathillian shook his head. “The Dark Forest is a dangerous place—well, not so much for me I guess, but it’s dangerous as it is beautiful. There are lycanthropes, and it appears the dark druids have made themselves a threat there now, too. You should stay here where you know the streets like the back of your hand. You’ve spent years moving through them, dodging the Guard. This is your element. You’ll be safer here.”

She laughed, but the sound was cold and rather intimidating coming from a woman so small. “Like hell I will! This place is far more dangerous than some wild animals in a forest. I understand I don’t know anything about the Dark Forest. Hell, I’ve never even been camping. But what I do know is that I lost my niece once. The day she came back to me I vowed I would never lose her again, and yet here we stand—without her.”

“I understand that—” Cathillian began, but Celine interrupted him by taking a step forward and poking a hard finger into his chest.

“Bullshit. I’m going with you. I’m going to meet your mother, the woman who took my niece into her home and raised her to be stronger than I ever could’ve imagined. Either you take me willingly, or I’m going to kick your ass and force you to take me anyway.”

Cathillian’s eyes widened as he stared at the much smaller woman. “Damn. Okay. Look, you can come. It’s only out of respect for you and Arryn, but I’ll let this happen because I’m worried about my decision. If I lost you, too, Arryn would never forgive me.”

Celine smiled. “Out of respect for me? That’s the only reason?”

Cathillian nodded for a moment, his arms crossed over his chest. “That, and you scare theshit out of me, not unlike your niece… or your sister, now that I think about it. The women in your family are pretty fucking frightening, you know that? Actually, you’ll fit in great in the Dark Forest with my mother. She’s also terrifying.”

The happy and satisfied expression on Celine’s face told Cathillian she was pleased with the outcome. “Good. I can’t wait to meet her.”

I apologize, I’m very under the weather, so I don’t have a lot of energy at the moment, but I wanted to make sure to get this posted! So I’m going to keep this short and sweet!

Thank you SO much for all the positive feedback on the cover over on the Age of Magic fan page and the Kurtherian Gambit page! You have made this author feel AMAZING! And EXCITED about the book release!

Editing is scheduled to be finished by noon tomorrow, so that means it will be published sometime after that. So keep an eye out!