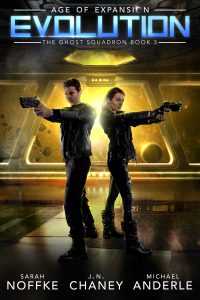 The soldiers pounded down the hallway, drawing closer to his position. Knox’s feet weren’t moving fast enough. The hallway was too long. There was nowhere to hide. What was he going to do?

The noise behind him stopped. He didn’t dare turn around. Instead, he pushed forward, faster. Only fifteen meters until the exit. He was almost—

A bullet whizzed by his skull, hitting the door ahead. He turned to see two Brotherhood soldiers, each holding a rapid-fire rifle.

Knox ducked when the next round fired off, letting himself roll on the ground, trying to get out of the way.

Knox pulled his pistol from his holster as he rounded the corner. He halted, taking a steady breath. Pausing to breathe seemed dumb right now, but missing would be fatal.

He cocked the gun’s hammer back and released it, loading a round into the chamber. Then he paused, listening to footsteps as the men continued through the hall. He waited until they were close enough…until the moment was perfect.

Knox fired, taking the Brotherhood soldier in the lead out first. The man fell back, the hit to his shoulder knocking him down. Knox let out a breath as he released the trigger and prepared for the next shot.

The other soldier had stopped, pulling his gun up, trying to find the target. Again, Knox pulled the trigger, letting two successive shots fly free. The first bullet missed, but the second went straight through the Kezzin’s leg, making him fall forward on his hands and knees.

The man stared up at Knox, a desperate look in his eyes. The soldier behind him, still alive, had crawled over to his gun, managing to grasp it.

Knox whipped around and sprinted for the exit. With both of these men disabled, there was no reason to stay and fight. He didn’t have to kill them, so long as he could get away.

Besides, more soldiers would be here soon. He didn’t have long.

He managed to get to his ship and open the hatch, an old Black Eagle that had seen better days. It had seen too many days, actually.

Knox had salvaged this bird a few years back, then fixed her up the best he could. It had been Mateo who had taught him how to fly, back when he first got the old ship working. That skill was going to hopefully save his life. He sank down into his chair, not even strapping in as he started the engines.

“Gonna be a fast take-off,” he said to himself. The engine stalled, briefly, but that was normal. Knox slammed his hand over the controls. “No, you don’t. Don’t fuck with me today. This isn’t the time.”

Out the side window, he saw multiple Brotherhood soldiers spilling out of the ship they’d arrived on—the vessel known as The Unsurpassed.  Knox had never seen anything quite like it, massive and smooth by design, but with more guns and weaponry than any single ship should have.

The soldiers aimed their weapons just as the booster kicked in, making the Black Eagle rise off the ground. The shots spilled over his aircraft at once, making loud ricocheting noises.

Knox fixed his eyes on the clouds as he rocketed away. “You’ve taken worse. Hang in there ole’ girl,” he told his ship, pulling back on the controls and speeding the Black Eagle away.

He took several potentially fatal hits before the bird managed to get away, soaring for space. If he was lucky, he’d make it out of the system. He already knew those men would follow him. People like that never left survivors. But if he could get far enough away then maybe they wouldn’t find him. Maybe he could stay alive.

There were very few things Knox was actually good at, but one of them was hiding.

He’d been doing it all his life.