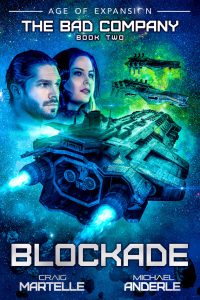 “Is it always this loud in here?” Timmons asked the large man with the crossed arms blocking the front door.

“Maybe this isn’t the club for you, old guy,” the man rasped. He leaned back to look down his nose at the group.

Timmons rocked back on his heels as if punched. “Old guy?” he asked, a shocked expression on his face. Sue started to laugh.

“We’re having a party in here. We’re from the Bad Company. Maybe you’ve heard of us?” Sue said, giving the man a furtive smile.

He looked at her sideways. “What’s that supposed to mean to me? You look like a bunch of troublemakers, think you’re better than the good, hard-working people of this station. Go in, but don’t be surprised if your dumb asses are the first ones I throw out.”

Sue leaned close, her blonde hair reflecting the flashing Seymour Heine sign. “I don’t think that’ll happen, but if you feel the need to throw us out, come on in and give it your best shot,” she said coldly as the others brushed past her on their way in. Timmons glared at the man over Sue’s shoulder.

The bouncer blew a kiss at Timmons. Sue stopped her mate before he could go full werewolf on the man. She grabbed Timmons’s shirt and pulled him after her.

Merrit and Shonna were already buying drinks for a small group of people occupying a large table. After a brief exchange, they shook hands as they gave up their seats.

Aaron and Yanmei stood to the side. “I don’t think I want to get into a bar fight.” Aaron frowned. Yanmei wore a tiny black dress, the same as Shonna and Sue.

“You won’t fight for my honor?” Yanmei said, baiting her husband.

“Always, but there is no honor to be had in a bar fight. We will leave before fists fly, and I know you can defend yourself because you’re faster than me,” Aaron replied evenly.

“Honor isn’t necessarily about who can beat whom. It’s about who stands up for whom, whether they know they can win the fight or not,” Yanmei replied.

“You’re starting to sound like Terry Henry Walton.” Aaron raised one eyebrow as he looked at his wife. She was Chinese, lithe and tall, a weretiger like him. He had been converted during his time in China as an English teacher. After the fall, he found himself in the United States, fighting over scraps until the native nation took him in.

But they turned him over to Colonel Walton when he passed through with his fledgling Force de Guerre. The weretiger had joined Char’s pack, not that he’d had a choice, but it suited him. He had always been opposed to fighting, so he tutored the children, watching them when the rest of the pack left to fight the battles that defined the rebuilding of civilization.

“Would I fight for my wife?” he asked her, holding her gaze without blinking. “Ten times out of ten, because you’re worth it.”

“Screaming Buki Holes all the way around!” Timmons shouted at a fleeing form. “And two Slippery Nipples.”

“It’s going to be that kind of night, isn’t it?” Sue asked, rocking with the music. “If I remember correctly what that is like. It’s only been what?A hundred and fifty years.”

“Fucking A!” Merrit screamed into the cacophony, thrusting his fist into the air. They tapped their feet to the booming music as they waited for their drinks. The server quickly returned with a tray full of glasses, maneuvering expertly through the crowded area.

Shonna chased people away who were trying to take the empty chairs at their table.

The drinks were deposited, and the server scanned Timmons’s face for payment.

“Is that how you do it? How much did that just cost me?” Timmons wondered, sliding back into his New Yorker accent.

“You shouldn’t worry about those kinds of things. It’ll ruin your evening. Go dance!” the server suggested. “It’ll take your mind off how many weeks you’ll have to work to pay off this tab.”

She bolted before he could reply.

Sue started to laugh. The Walton children and their spouses magically appeared from the crowd, securing the empty seats. Marcie, Kim, Kae, Auburn, Ramses, and Cory looked grossly out of place, even though they were dressed up as the werewolves had directed. The club was loud and crowded.

“Is it always this loud in here?” Cory yelled as she held her hands over her wolf ears.

“That’s not the word I’d use,” Marcie replied as Cory continued to wince.

There was a commotion at the doorway and the group turned to see Terry Henry Walton holding the bouncer in the air, and then he slammed the man into the wall.

“He had it coming,” Timmons said.

Cory and Ramses jumped up and forced their way through the crowd to get to the front door just as Felicity and Ted arrived.

“Put that man down!” Felicity demanded.

“This fucking skid-mark would be scrubbing decks using his toothbrush if he worked for me!” Terry declared.

“Good thing he doesn’t work for you,” Felicity said in a measured tone. “Now put him down.”

“You’re not getting out of this by starting a fight!” she snarled. Terry’s eyes dropped. He hated seeing Char angry. He nodded and they walked inside.

Felicity held her hands up. “Well?” she bellowed.

Terry and Char both turned. Felicity pointed to the bouncer.

“Fuck that guy. He’s a total douchebag. You can have a gatekeeper who isn’t an asshole, unlike that bonehead who’s drunk on the little power he has. So fuck him. I’m not apologizing.”

Char nodded and tipped her head, signaling to Terry that it was time to join the party.

Felicity looked to Ted. He looked back in the hopes that the evening was over, and he’d be able to return to his lab.

Cory led her parents into the dance bar called Seymour Heine. “Nice entrance, Dad,” Cory yelled over her shoulder. The way ahead cleared for Terry. He walked proudly in his gigolo shoes.

“I should have known,” Char lamented.