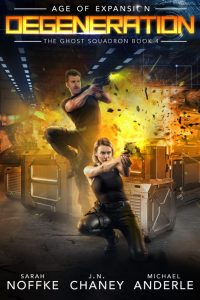 Heat blasted Eddie in the face as he ducked under some fallen trees, and he stayed in a crouch as he sprinted through the burning jungle. The fire at his back was growing in intensity, although the crews had been fighting it for days.

A loud crack overhead tore his attention in that direction. The fire had overwhelmed a large stand of trees, which fell in on each other until the largest chose the direction they were going to fall. Eddie rolled to the side, dirt and ash raining down on him as the burning trees hit the ground exactly where he’d been.

He didn’t pause, but rather dashed forward to clear the next part of the burning forest. His vision blurred from his incredible speed, and his feet hardly felt as though they touched the soft ground before rising again.

Flames licked the side of a building, having jumped from some nearby branches, but Eddie sped up the ladder to the house, which had been built on stilts. Entering a burning building was one thing, but entering one that was held up by wooden poles in the middle of a forest fire was something else entirely. None of this seemed at all like a good idea.

Too bad he didn’t have a choice.

The trap door at the top opened and then slammed over as Eddie spilled into the jungle hut. He scanned the room, and the smoke burned his eyes. The living space was open but there were some rooms at the back, so he ran in that direction while wiping tears out of his eyes.

He kicked the first door open and searched the room, which was empty. The structure rocked, probably from the fire consuming the front of the house, which was where the next set of rooms was located.

Without hesitating, Eddie darted for the next room and rammed his shoulder into the door, ripping it off its hinges. He still wasn’t used to his enhanced strength. After all, he’d only had this body for a short time.

Eddie pivoted to the adjacent wall and shot his foot straight at the door. The following area was empty at first glance and fire licked through the open window, spilling smoke into the space. Eddie covered his face from the blaze and was just about to turn back when something caught his eyes.

On the far side of the room between the wall and the bed was a small boy.

Thank the fucking stars! Eddie thought, relief swelling in his chest. “Come on!” yelled Eddie, extending a hand to the kid, who was about four years old. The boy’s large eyes stared at the intruding fire, and his face was swollen and red from the heat.