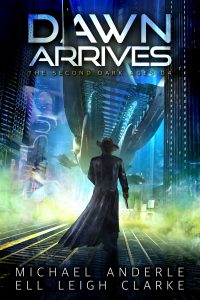 The park was peaceful.

Sunlight kissed the lawn and littered the trees casting intricate patterns beneath the leaves.

The black box touched down lightly in the square. It had been several days since it had been here. Not that anyone noticed.

Sabine was the first to step outside, gazing at the wonder of the world. The whirlwind tour of Europe had been mind blowing. At least it would have been for her old self. Her new self took it in her stride, as simply as breathing, or shooting a gun… which were on a par for her now anyway.

She wandered out, looking through her nanocyte-advanced eyes. Her wounds had completely healed, leaving her beyond grateful for her new lease on life, and feeling several decades younger and more powerful than she had ever felt before.

She turned, sensing Akio come in to land in the fighter pod next to the box. She smiled. He got out of the ship, calm and stoic as ever.

They exchanged a glance. An acknowledgment.

Sabine came out from behind Yuko and turned back to look at the sky, inhaling the atmosphere and appreciating every moment of what her senses were taking in.

Michael ambled out, removing his hat to scratch his head and then placing the hat back on his head.

Jaqueline was the first to suggest the specifics of their first mission, as her were body craved food. “So, what about the breakfast place we found just across the park?”

Michael looked at Akio. As long as there is meat. I could murder a steak right now.

“Out loud, boys!” Sabine reminded them, tilting her head at the others.

Akio shot across to Michael,  She can read our thoughts?

Michael shrugged. “Do they have steak?” he asked Jaqueline.

She grinned. “You can bet your hat they do! And since when do you eat?”

Michael started walking. “I could do with something since nearly getting torn apart in the Etheric. And I have a hankering for something with iron in it.”

Mark slung his arm around Jaqueline’s shoulder and followed. Eve closed up the box and joined the group as they made their way across the lawn, happy and peaceful for the first time in a long time.

Sabine quietly followed, looking all around as if she were seeing with new eyes.

“I suppose we should talk about what’s next,” Michael ventured.

Yuko nodded. “I’m guessing getting back to BA is still the priority?”

Michael dabbed his mouth with his napkin. “It is.”

Yuko looked up, arranging her thoughts. “Well, we have the locations of theboxes. Five we have in our secret location.” He glanced over at Akio who nodded. “And then the other eleven will be wherever the map says they are.”

Michael was considering the options. “We still need engineers and scientists to bring them all together,” he laid out. He gestured to Akio. “We’ve been talking about the skills. Those with the technical skills we need who live here are our best bet. But they lack honor. Many will try to steal what they can if we keep them in Japan.”

Yuko filled in the blanks. “So you’re thinking you want to recruit them here and then take them to an isolated location for them to work?”

Michael bowed his head quietly, then glanced around, reading minds to make sure they weren’t being monitored.

Jaqueline finished her last bite and swallowed. She leaned over to Mark who noticed her, then looked down at his plate. When he looked back up, she was smiling at him.  “So, are you stuffed? Are you done with that bacon then?” she asked.

Mark pushed his plate over to his girlfriend with a smile. “Knock yourself out,” he told her.

Jaqueline pushed her knee against his under the table.

Michael pulled out a tablet he had been using in the Pod. Flicking it on, he pointed to the screen on the table. “And this map? Where are the sites of burial?”

Eve responded. “China,” she said quietly. “If you want to stay there I can find a suitable location where your scientist can work.”

Michael nodded, getting up, his eyes still drawn together in thought. “Very good. Let’s make that happen.” He turned to Eve. “Please put the word out for the best tech engineers, inventors and scientists for an experimental machine.”

Eve grinned. “Got it. We’ll have something set up and operational within the day.”

Yuko hesitated. “So. Uh, who will be running the interviews?”

Michael looked at Eve and then Yuko. “Go team?” he suggested, overly hopeful as a small smile started to grow on the very sides of his lips.

Yuko shook her head firmly. “We need to be sensible about this. If we want to reduce the critical path to getting this done as fast as possible might I suggest that you and Akio take the recruiting. Mind scanning and all that could be helpful.”

Akio’s face remained expressionless. “But technology is your thing.”

Excellent response, Michael sent to Akio, his eyes giving nothing away as he continued to look at Yuko.

I am trying, Akio replied. His face giving nothing away to Sabine.

Eve chimed in. “I can run thorough enough background checks from here before we even see them to know they are capable. We only need to meet them for them to get to know us and who they’ll be working for… and for you two to do your mind-reading thing.” She looked from Akio to Michael.

Akio shrugged, allowing a half smile to break as he glanced up to Michael. “Guess we’ve got our next mission.”

Michael sighed, stepping out from the table and scrapping the chair back under the table. “Well, if any of them piss me off I reserve the right to…”

Jaqueline raised her eyebrow. Michael stopped as he regarded the young woman, who had finished Mark’s plate as well. “Go ahead,” she said. “I’m listening. Oh… and did I mention I’m sooooo looking forward to meeting Bethany Anne?”

Michael crumpled under the frustration. “Well… fine.” He looked around, resigned. “Maybe I’ll spend the rest of the day blowing off some steam then…”

Jaqueline chuckled. “Looks like he’s all antsy after that last operation.”

Mark started chuckling, but was quickly silenced by a glare from the Dark Messiah.

“So unfair how you girls get away with…” No one listened to the rest of the sentence. Michael had disappeared.

Akio got up, placing his eating utensils on the table. “I’ll make sure he stays out of trouble,” he said as he stepped away from his chair.

Eve called after him. “If you need a battle range, we can arrange for something in the Tech Palace… You know, some realistic simulations of ancient battle scenes from much of Earth’s history.”

Akio looked impressed. He bowed slightly. “Let me talk to him.” And then he vanished out of the door, the bell ringing as the only hint that he had been there.

The team watched the empty space that remained.

Mark nudged Jaqueline. “Did he just?” he whispered, his eyebrow raised.

Mark set his tea cup down. “And all that about not drawing attention to-”

Jaqueline patted his leg under the table. “It’s a do as I say, not as I do kinda thing, honey.” She paused ever so slightly. “You’ll get used to it.”

Sabine sipped her tea, contemplating something that made her eyes defocus and seem kind of dreamy.

“You ok?” Jaqueline asked her.

“Huh, what? Me? Yeah… fine…” she muttered, only half aware the others were all looking at her.

FROM MICHAEL >>> So, 4 1/2 hours of sleep last night.  I’m nodding off here as I upload this snippet and realize…DAMMIT!  I forgot to say something at the end!

I’m sure I can say something really fucking cool, but I’m too tired to do that.

So, I’m going to admit I’m NOT superhuman, and lay down and take a nap.

Because I’m a full-time author, and I can do really cool shit like that…

I just hope I don’t sleep too long, because I will suffer from nap-rage!

(I wake up and stay SUPER-Cranky for like two hours, it’s horrible.)

Please let me know in the comments on Facebook (if you are on there) what you are doing this coming week.