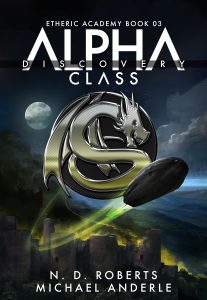 Diane and Dorene poured over the schedules for the umpteenth time. Dorene stamped her foot in frustration. “They start in two days, and we still haven’t gotten the assignments pinned down! Whose idea was it to mess with the class schedules?”

Diane looked up. “That would have been you, DJ. It’s going to be worth the hassle. The competition for a spot in one of the two fighter groups this semester was one of your best ideas yet! The kids took their skills to the next level to try and win a place.” She took a second to smooth her braid, catching a loose strand and tucking it in while she stared at the roster on the desk. “Look at Todd Grimes’ scores. He’s going to be one our best pilots when he grows up. We knew it would cause problems this term, so we just have to suck it up.”

Dorene cheered up at that. “You’re right, dear. I was speaking to one of the fighter boys last week. Thomas, his name was—nice young man with such a cute…”

Dorene hid her laugh with a cough. “He told me that the students’ training tactics are being added to the playbook as fast as the kids come up with them.” She took a sip of the cooling coffee on her desk and set it down again with a grimace. “Ugh. Aleksi from Delta is applying his skills in statistics to the planning of the gaming events now. He’s got the whole thing running as smooth as silk.”

Diane agreed, “It’s getting competitive! The top ten deserve to get specialist training, and increasing their knowledge base can only help them improve on what they’re already achieving. But it is going to be a total nightmare for the scheduled core classes. Our faculty are extending themselves to fit the classes into their schedules as it is. They don’t have the time to repeat the class when the fighter groups are done. Those students will have missed out. We can’t have that, DJ.”

Diane’s brow furrowed in thought. “It’s a good idea, we’re just not thinking big enough.” She began tapping on her tablet and muttered, “I have the solution. There’s already one group specializing this semester, so why not go the whole hog and send each student to the place they’re likely to end up when they graduate? We have their aptitude scores from the entrance exams, and we can use those to build a list of skillsets and assign a mentor to each.”

Dorene stared open-mouthed at her twin for a moment as the idea sank in. “That’s…genius. We split all the classes, sharpening the individual students and strengthening the teams overall in the process. Then no student misses out on the core skills.”

Diane dropped her tablet on the desk with a flourish. “I’ve just sent a memo to all department heads, telling them their future replacements are coming to spend the semester learning from them.”

The two just looked at each other for a moment, imagining what the teachers would do when they got that email, then burst into laughter.

Diane wiped a tear from her eye. “Let’s arrange it all before the conscripted mentors descend on us. If we’re going to create chaos, let it be organized chaos!”