“Interesting that you should mention the History Channel show,” ADAM spoke through the speaker system. “It seems we have a group from a small YouTube show, called Alien TV Podcast researching the Dulce, New Mexico Base at the moment. They have entered one of the cave entrances and are following the cavern towards what is left of the XJ-12 base.”

“Can’t this shit just leave me alone for two damned weeks?” Bethany Anne asked out loud, eyes glancing to the ceiling, “Just two weeks. After that, it’s the world’s fucking problem. Okay, ADAM, give me an update. What is going on and who is doing what about it?”

“Presently, Captain Jakowski has Richard and Samuel heading toward New Mexico to ascertain what they know and perhaps extract the alien hunters themselves,” ADAM replied.

Moments later, Bethany Anne agreed to let her team’s near Earth deal with the Alien enthusiasts.

ADAM had reminded her she had a date with the ex-President and his family.  This was the third time. She had rescheduled the previous two appointments to show him and his family around the Meredith Reynolds and was refusing to reschedule it this time, no matter how much got in the way. She left the general with team BMW to finish the discussion and excused herself. She opened the door and nodded to Scott who closed it behind her. She, Asher, Matrix and Scott then walked towards the Teleport room where she needed to take an Etheric short-cut back inside the Meredith Reynolds to meet the President’s family.

“Beware the Wechselbalg, they bite…” Shun read aloud the sign in front of the first set of doors. The three men could hear the practice, the shouts, the cursing (in multiple languages), the occasional bark, growl and scream coming from the other side of the doors.

Zhu looked at his two friends, “You remember the time we got attacked in the early morning?”

“Which time?” Shun turned from the sign to look at his friend, “We were in so many of those damned attacks it became commonplace.”

“Right,” Zhu agreed, “now, both of you, close your eyes,” he told them, speaking in Chinese.  His friends did as he asked, not needing to know where he was going with this.

“Go back to one of the hard ones, the times where we heard our men screaming, the cats attacking from under the brush, or from above.  The feeling in your heart, your mind, your muscles when we meshed. The commands we spoke to each other, the knowledge that we weren’t three, but we were one in defense of each other.  The ability to sense what the others knew…”

Jian’s mind took him back to the darkness, the smells, the screams of pain and the screeching of the cats in the night. The smell of gunpowder, and the occasional pain if he or one of his friends were hurt.

Then, all three felt it again, the calmness in turmoil, the connection.

The reason they were the best together, never apart.  When the leadership made them separate, they pulled apart the best group, hoping that the three could teach others.  Unfortunately, it never happened.

When the three opened their eyes again, they weren’t the three friends standing outside of the APA.  No, they had been transported back to the constant training in the fine art of staying alive.  Zhu stepped back, and Shun stepped between his two friends, strong-arming the door and stepping in.

His two friends right on his heels.

In another area of the battle station, both E.I.s Merideth and Reynolds reviewed the video of the three men outside the APA, noted their conclusions and labeled it a priority for Peter to watch.

“And I’m telling you,” Dwayne told Craig as he pushed up the two hundred twenty-five pounds for a quick set of twenty before resting, “that there is no fucking way we will be going back to Earth. So, you’d better start practicing your ass off Craig, or Peter is going to…”  Dwayne rolled his eyes when he noticed his friend not listening.  Someone had come in, and his friend had used that as an excuse to ignore Dwayne’s recommendation to train harder.

It wasn’t that Craig was out of shape, or out of training, but Dwayne felt Craig’s ego was a little too large when they had yet to actually test themselves against a non-human enemy.  Craig and his Marine team had easily taken out a two yollin attack group just two days previous, and Dwayne was shocked to see Craig able to get his bulbous head inside the APA now. It had grown so large from his ego puffing it up.

Making sure his weights were locked correctly, something Craig was supposed to be doing, Dwayne turned his head to note the three Chinese men who had stepped in.  Looked like Marine material to Dwayne, so he grabbed his barbell once more and prepared to start another twenty.  He preferred ten sets of twenty, and then three sets of three hundred pounds for ten reps and a final effort comprised of five reps at five hundred pounds.

“Yeah, you keep saying that,” Dwayne mumbled.  There was something about the three men that caused Dwayne’s hackles to go up slightly. He wasn’t worried they would do anything, but if he had to spar with them, he wouldn’t dismiss them.

“Craig!” a voice shouted from the opposite direction.

Dwayne smirked, Craig had just been caught by Peter. Seems like Craig’s all-knowing awareness was caught with its pants down

FROM MICHAEL >>> Alright, all 25 chapters are with the final editor and I should have some back starting tonight, tomorrow morning. JIT team on Wednesday, release on Thursday.

I should be writing my Author Notes soon.  I wrote another scene (end of chapter 19) and intend to do some revamping of the first 15 chapters as I edit to put in a few more explanations / hints going forward.

Craig is looking to release in about 8 days, then Justin ten after and somewhere in there, Natalie Grey’s first book is dropping, too.

Another Craig book at the end of February before he jumps back on his own series for a month (I guess I can’t keep them all the time) and then we will see TS Paul’s second book… I’ll have to ask him about that.

Speaking of TS Paul, I know that a metric TON of my fans read his books, as well. How? Because he is perennially either my first or second also-bought author on my Author Page (The part on the Author Page (left hand side, towards the bottom)) that says “Customers Also Bought Items By” and a list of 16 authors.  Scott is #1 or #2 … always.

He is #2 right now (My Author Page is Here: https://www.amazon.com/Michael-Anderle/e/B017J2WANQ if you are curious).

Scott just released his fourth book in The Federal Witch series (it says book 03, but he had an introduction story that was book 00). I’m about to read it tonight (Stephen King said I had to, Scout’s Honor!) and thought I would put it up here for the many fans I have that are reading that series as well!

So, you have about 48 to 54 hours to finish reading this book… Bethany Anne is watching! 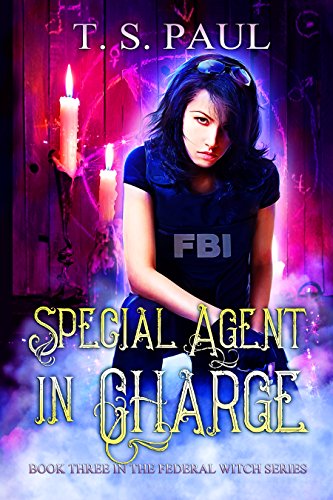 The Magical Crimes Division of the FBI has a new boss!

Agatha Blackmore’s Probationary period is over and she has been promoted to Special Agent in Charge. Now armed with a new team of Paranormal investigators she is setting out on a new adventure.

An innocent Werewolf child has been murdered. Local FBI Investigators have discovered that Slavery still exists in the modern world. The new team must combat deceit and corruption in their pursuit of Justice and Salvation for the Paranormals of the Midwestern United States.

What happens when the hunter becomes the hunted?