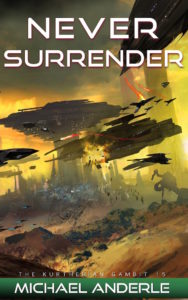 “The ship’s scopes are showing three warm bodies at the landing zone, and three guns pointed to where we expect to land,” Ber’knick told the captain over the intercom system.

Captain Maek-ven weighed the information before pressing the button and asking, “Can you give me any more details on the three warm bodies?”

The answer from the pilot was quick, “Yes, two humanoid and bipedal. One animal, four legs. Much smaller than the two humanoids.”

“Sounds like one of their dogs,” the captain said aloud.

His security chief, Ster-hel, looked over at him. “You mean like the Empress has with her most of the time? That white four-footed creature?”

The Captain wanted to roll his eyes, Ster-hel seemed to be fascinated. No, not fascinated, rather he seemed to be mentally unstable about acquiring one of those types of animal. “I could not tell you if it is the same one. I guess we will find out when we get there.”

The ship’s engines started to whine, a rising crescendo as their pilot slowed their ship down and directed more energy into slowly landing the craft. For all of the pilot’s bitching, Captain Maek-ven felt the cost of the ship was appropriate. The technology on it might be a little old, but it did fly well and was in good shape. He turned around and walked forward, slapping his hand on the button to open the doorway. The hatch lowered to the ground as the pilot gave the all clear over the intercom.

Ster-hel, weapon out, went before the Captain. The idea, and it seemed to be true no matter what species you were, was trust each other and provide mutually assured destruction. There was no way the three little guns up in the rocks would harm the airship enough to keep it on the ground. However, it could probably kill the Captain and that was enough. Now, his security guy, Ster-hel, could probably kill at least one, if not both, of the contacts out there, but more than likely both the Captain and Ster-hel would die at the same time.

Ster-hel gave the all clear, and Captain Maek-ven continued down the ramp and set his foot back on Yollin soil. He looked around at the location where the human wished to meet.

He was impressed with the selection. It stopped any significantly larger ships from being able to enter and land and also offered plenty of locations to hide guns. The human had to understand that they would have enough technology to find additional bodies, should there be any around. So far, he seemed to be playing on the up and up.

Captain Maek-ven had paid attention to the information that was available on the humans, and he could see that the other was a female of their species. Considering how close they were, they might also be in a relationship.

That would be even better, if both were junkies for this drink. Perhaps he could get spice that he could plant and grow, given enough time.

The agreement was for the spice already processed that would not grow. He would still try to take the spice to a geneticist to see whether or not they could yank enough DNA out of the the spice to provide a way to propagate.

It took Ster-hel and Captain Maek-ven another few minutes to make it over to the three beings. Well, two humans and ….

“What is that?” Security officer Ster-hel pointed toward the animal.

Capt. Maek-ven wanted to palm his face in frustration. If his security officer blew this opportunity to purchase the drink’s necessary ingredients, he would personally shoot one of his damned toes off.

Christina was enjoying running around in her four-footed form. She didn’t mind not being in her human form at all during this episode.

It was rather fun when aliens mistook her for an ignorant beast.

For whatever reason, she was incredibly advanced for her age, intellectually along with the ability to transform her body. Aunt Bethany Anne suspected her intelligence was a byproduct of the upgraded genetics from her parents and the nanocytes that helped mold her body in her mother’s womb.

Her ability to transform was most likely due to her mom and dad’s advanced nanocytes having been through the Pod-doc.

She watched the ship land and had to agree that whoever the pilot was had done a good job. It took them but a moment for the back landing ramp to disengage from the ship and lower to the ground.

After a few moments, someone came out with a weapon and looked around. Christina watched as the Yollin male was satisfied before heading a few feet in their direction and looking around again. Obviously a security person of some type. He turned around and yelled back to the ship. Seconds after that, another Yollin came out – this one looking like he was in charge.

She sat down on her haunches, her tongue hanging out, as the two of them headed in their direction. It wasn’t long before the one in front pointed at her, and asked what she was.

Christina turned to look up at her parents, wondering what they would answer.

FROM MICHAEL >>> I’m presently writing this from the back seat of my wife’s car.  She is driving us to our date night location, and it is a little ways away.  So long as I got this snippet out, I figured the rest of the night I could take off.

So, this morning I changed out my Facebook picture from a business picture I had for my consulting business (taken like 6 years ago in a suit and tie) to one I had taken probably 6 months ago when a couple of fan’s had told me, “Get rid of the picture on Amazon.”

Well, I didn’t…Get rid of the suit picture (I did get rid of the yellow looking picture on Amazon.)  I really had no excuse, it was mainly laziness.

You see, I consider myself a intelligently lazy person.  I don’t WANT to work all the time, but when I do, I try to be smart about it.

Occasionally, I actually accomplish it, too.

So, after speaking to The Author’s Wife (who said I needed to go get some professional photography done for when The Today Show called, we had something) I guess I’m slated to get something a little better than el’ scruffo face I’m using on Facebook at the moment.

Not that I”m worried about The Today Show calling, but who knows, maybe I’ll ship them the suit and tie picture and show up in my normal outfit.

You know, the black t-shirt, Levi Jeans and sneakers I usually wear.  😉

We are getting ready to drop a lot of new titles on you (again) in the next few weeks.  Craig will have one, then me (or him again) and then me, CM Raymond and LE Barbant, Justin, TS Paul and sometime soon, I’ll start sharing just a little more about what is coming later in 2017.

Oh, and for those who asked, I’ve checked with Jeff Brown (artist) to start figuring out something that helps place all of these series on a timeline to better understand the damned magnificent idea in my head. (Ok, you should really read that as “the concepts in The Author’s head which, when processed through the talents of a freaking artist, look damned magnificent.)

My father has a saying which is “Never let the truth get in the way of a good story.”

So, that’s my story, and I’m sticking to it.