Tabitha opened the door to her suite and strode in, calling out for her roommate, “Anne?”

She walked over to the kitchen table and dropped off her tablet. Turning around, she noticed Anne coming out of her room. She seemed better than when Bethany Anne had brought the young woman to stay with her. Sure enough, Jinx, one of Asher’s and Bellatrix’s young puppies, came scooting out of Anne’s room a moment later.

“Hey R2, what’s up?” Anne turned around and dipped down with her arms held open, Jinx jumped into her arms while Tabitha shook her head. Now that she was on the receiving end of playful nicknames, as she would commonly do with Barnabas, it could be quite annoying from those much younger than oneself. Saint Payback, truly was a bitch.

She eyed the young woman.

“How about Tabbie with an ie?” Anne smiled, wondering what the Ranger would say next.

“If a few of the Tonto’s and I didn’t need to leave shortly, I would make you eat those questions. Further, I don’t think you have enough bruises on your body for the amount of workout time that you’ve been spending.” Tabitha raised an eyebrow as she looked up and down the teenager.

Anne quickly shook her head. “Nope, workout time won’t be necessary. Tabitha is what you want to be called? Tabitha is what you will get. As for the bruises–” She waved a hand up and down her body “–Bethany Anne suggested that as a researcher, I needed to know self-defense, but did not have to work out as hard as all of the rest.”

Tabitha drew her eyebrows together. “Is that the truth?”

Anne looked at her roommate and bit her lip, finally deciding to nod her head in the affirmative.

What is it number two?

Tabitha rolled her eyes before responding, Is it true that you told Anne she didn’t need to work so hard on her physical training because she was going to be doing research?

No, have you ever known me to suggest such a thing?

No, I haven’t. So, you can imagine my surprise when your new Etheric Researcher suggested that this was exactly what you had said.

Huh, so my new Etheric Researcher is acting all teenagerish, am I understanding you correctly?

That’s the way it appears.

Okay, since you have to go out with the Tontos on the slave issue, I’ll make sure to take care of this with Peter. He should have some insights on recalcitrant teenagers and getting the best results out of them.

Very well, I will consider this a closed issue.

Bethany Anne added, You can let her know that Peter is going to have new instructions, from me, when she is due for her training session three hours from now.

Will do, my Queen, have a great one.

You, too. Go kick some pirate ass.

Tabitha smiled. Oh, I intend to, this ought to be a hoot.

Make sure you say hello to the Twins for me.

Bethany Anne cut the connection between the two of them. Tabitha raised an eyebrow. “Bethany Anne says that Peter will have new instructions for your workout when you see him in three hours.”

“Three hours!” Anne’s face opened up in shock. “I’m supposed to be meeting a couple of friends over in the library in three hours.”

“I suggest … next time that you do the workouts that you were told to do, instead of trying to get out of them. I especially suggest …” Tabitha reached up and tapped the side of her head ” … not lying to one of the Queen’s Rangers who can talk to Bethany Anne directly.”

Anne’s eyes closed when she realized her mistake, she turned around and then kicked the air in the direction of the couch. “God, it was so much easier getting away with stuff when it was only my mom and dad.”

Tabitha pursed her lips, “I understand you’re doing well with your dad now, is that right?”

Anne turned back around to face her roommate. “Yes, we spoke a couple of weeks ago, and he apologized for not intervening with mom when she got so upset with me all of the time. He says that mom is going to take a little while in the therapy sessions before she’s going to try to connect again with me.” Anne shrugged. “I’m okay with it all now, but it was pretty scary in the beginning when I thought I’d be on the outs my parents.”

Tabitha walked over to the young woman and put an arm around her shoulder and pulled her in for a hug. “You don’t need to worry about that. Your parents will forgive you, no matter what the problems are. You might just have to give it some time before it happens. They love you, but your mom was under some incredible strain and she broke. That’s nothing against her, and really, it helped a whole lot. Now, we understand classes needed to be created for those of us who aren’t coping as well as we had hoped, once we left Earth. Some of us get so involved with the next goal, we forget that a lot of those who are supporting us right now are maybe having their own troubles and difficulties.”

Tabitha pulled away and looked down at the teenager. “What did you say?”

Anne smiled. “I said, ‘I can’t breathe!’” Anne pulled Tabitha back in for a hug before releasing her. “I know that now, but it was pretty scary when the Queen emancipated me in the first place. I’m super excited to be working on the Etheric research, and it’s kind of cool that I sometimes get to talk to my dad about it as well.”

Tabitha turned and started walking to her own room in the suite. “Well, he did all of that work with that stupid black-ops shell company, so some of this is not that far out from what he was working on.”

Her voice came from inside her room, “So, who knows, maybe you and your father will be famous researchers into Etheric Travel!”

Tabitha didn’t see the small tear that Anne reached up and wiped away.  She waited a moment to get her emotions in order. “Maybe? That would be pretty rad.”

I put up my laptop, and decided to try and take a nap. But then a “oh shit” happened.  As in, “Oh shit, I forgot to put up a snippet!”

Pull out the laptop, click on GoGoInflight and grab 30 minutes of internet connectivity and BOOM BABY!  Yeah, I’m uploading a snippet.

Why yes, I AM the shizzz.  (Shit, I hope that is spelled right!)

Actually, I say that, but I feel bad because I could have done this while waiting at the airport, but forgot.  So, for those who are reading this on Saturday, I’m sorry!

He also got under 1,200 in the store (meaning, he was so close to being in the top 1,000 books being sold for that hour, a HUGE hallmark for any author, anywhere.)

For those who don’t know what I’m talking about, my youngest son (17 years old) started his author efforts with his own series in December with The Courier Chronicles. In it, he has built a fun universe that I would happily read if I wasn’t the ‘beta reader’ for it in the first place…

As in, “Dad, I’ve written another 500 words…” and then his Macbook Air from 2010 is shoved in front of my face.  Talk about early author anxiety, he certainly has it.

I told him back when he released book 00 that I would support his efforts and tell all of my fans everywhere and call in a few favors AFTER he released his second book.  Because, that would tell me he was dedicated to doing more stories.

THIS IS HIS SECOND BOOK BELOW  (Book 00 – his first book – is here: Her Royal Runner) 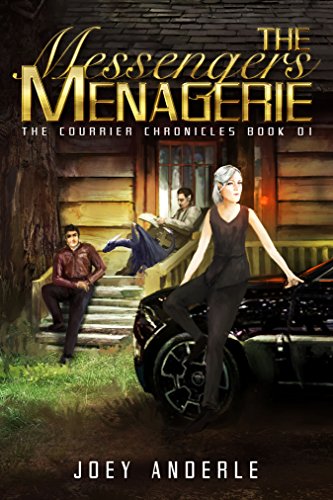 as supposed to be a simple weekend job…

Now, Sterling Booker Wells hasn’t been in charge of her for 24 hours and they have already busted up one effort on her life, and even worse, there is a crossbow bolt hole in Alphonse’s prized, painstakingly accurate, exquisitely restored, vintage replica of Steve McQueen’s 1968 Mustang from the hit movie Bullitt.

However, Booker argues in his defense, the Princess hasn’t suffered a scratch.

The Messengers Menagerie continues the first weekend when Sterling Booker Wells meets the Royal Elven Princess Auralee, what (else) could possibly go wrong?

How about a new crew sent to do him in?

And the Princess who will be by his side.

CHECK IT OUT ON AMAZON RIGHT HERE! (US STORE)