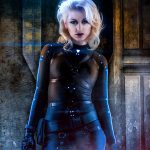 Molly looked like she wanted to beat a hole in the wall if Paige was about to add to Brock’s delusion. “What are you talking about?” she asked in her most practical, even keeled voice.

“Demons,” Paige answered, just as seriously. ”Dimensional Etheric Mediums Of the Next Sector,” she answered as she pointed towards the door.

Molly replied, “You mean, evil things like ghosts and spirits and—”

Paige shook her head, “No. You’re thinking of the ancient human myths, I think,” she explained. “Although those stories were thought to have stemmed from the same phenomenon as Estarian Dimensional Walkers.”

Joel looked confused. He carefully placed a box down next to the new pile they’d been making. He stopped to listen to Paige until he felt the sudden and sharp pain of Molly’s elbow in his ribs. He swiped at her head, which she ducked easily, then went back to the boxes.

Brock noticed that the disarray was making his otherwise tidy workshop look like a dumping ground again.

Molly wasn’t done debunking. “Are you fucking with me?” she asked, now looking at Paige, eyes narrowed.

Paige shook her head playfully, smiling slightly at the reaction of the three humans around her.

Joel jumped in before Molly could quiz Paige. “So what are these dimensional traveling things?” He casually wiped the sweat off his forehead with his forearm. That last box had been a challenge.

“They’re called dimensional travelers, locally, or DEMONS officially. They’re ascended persons who can travel in and out of neighboring dimensions,” Paige explained.

“I didn’t think you were into all that?” Molly probed, thinking back to their conversation back on Estaria.

Paige had made it very clear that even though she was descended from a very spiritually powerfully line, she was in no way interested in continuing the family traditions.

Of course, this heart-to-heart had taken place over a few too many beers, so it was entirely possible Molly had misunderstood.

“I’m not,” she agreed, “but this part is well known and scientifically documented. It’s the bit about what you need to do to ascend that I’m just not into.”

Brock, absently wiping the dust off his hands with a rag he’d pulled out of his overalls pocket, took a step closer to the circle of intrigued crew that had formed around Paige. “You mean you know how to ascend?”

Paige pursed her lips, “Yeah. I mean, my grandmother taught me some stuff. But I think it’s mostly a load of quack-a-doodle. Plus, I’m not interested in spending my life meditating as I wait for death. That’s why I dropped it as soon as I was allowed to. But it’s totally doable.”

A man smoking a cigar, wearing civilian clothing in a room full of military personnel, leaned into his screen. He was carefully watching something unfold that might just tip the scales in world events a few—or a lot—of systems away. He always was annoyed to have to place these damned locations. A perfect ring of smoke wafted up past his head from his most recent drag of the coveted Earth product.

An audio feed hailed him. “Sir, the generals are ready for your input, if you’d care to join them.”

The room hummed with quiet activity, holo feeds pulling intel from all over the galaxy. The outside world thought there was peace, but one man knew otherwise. He was waiting. Preparing. Playing the political cards as he had to, but all the while biding his time until the human race needed defending again.

The man took another draw on his cigar. “In a minute, ADAM. This is getting damn funny.” He chuckled away gently to himself, nodding politely to an ensign who recognized him as he hurried past the console he was occupying.

“Thank you, ADAM.” The man watched the holo feed in anticipation. “I’m just waiting to see how long it’s going to take Ms. Bates to try the door handle.”

There was a slight pause in the audio feed.

A moment later the audio feed came back online and ADAM spoke. “I calculate, based on her behavior observed thus far, using a decision heuristic designed for human cognitive abilities, she is four seconds away, within a tolerance of point three seconds.”

The cigar-smoking man took another drag and started to smile, as if challenged by a young buck. “Care to put a wager on that?” he asked, seeing if he could needle the AI into putting his money where his heuristic was.

“Done,” the man said. “I think longer. And if I win, it’s coming out of your allowance. You’re not to just adjust the figures in my account. You hear me?”

“I hear, General,” ADAM agreed in an even tone. “I understand the psychology of betting. There has to be a downside disincentive for me for this to be a true game.”

The man grunted and waved his cigar.

FROM ELL >>>  When the comments for a section of BOOK 2 got bounced back to me, MA had inserted some random stuff about the Central Systems, and how the planets were organised around Sark.

I tried to convince him to take it out.

Ellie: It’s superfluous, and it’s getting in the way of the story.

MA: Yeah, but even I’m still not clear on how these damn planets are organised. The fans aren’t going to know from what we’ve written.

Ellie: Ok, but it’s not important for this part of the story. They know there is Estaria and the asteroid. That’s the important stuff.

MA: Right but they need to know. Go ask them on fb what they think…

MA: And don’t do some clever shit to weight the question to get the answer you want!

**Ellie goes away to ask the question**

**Comes back to Slack a few hours later**

Ellie: You were right.

MA: Sorry, what was that?

Ellie: You were right, dammit. They want maps, diagrams, prologues and the whole goddamn enchilada. And you were right.

**Ellie gets to work again**