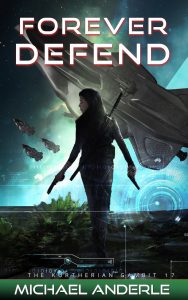 “Figures,” Bethany Anne grumped as she reached for the case. John released it before she got there, but she snagged the handle before it could fall six inches. She pivoted and turned back to her quarters, asking over her shoulder, “What color?”

John lowered his arm. “Why, your favorite, of course!”

“Hey!” she protested, as she turned to close the door to her bedroom. “No one can see me bleed wearing this color!”

The door closed and John grinned. “Well, anyone else’s blood, anyway.” He looked around the personal meeting room for the Empress of the Etheric Empire and raised an eyebrow, then walked the fifteen paces to the cooling unit and opened it. There were at least four types of beer, including a couple of Yollin beverages, in the top third of the unit.

The bottom two-thirds was filled with red bottles with a completely (mostly) legal swoosh along the side. Bethany Anne had said she doubted the Coca-Cola company could bring her to court in another location in the galaxy for trademark infringement, and besides, it helped her remember what home was like.

She had her Cokes in the lower part of the fridge because cold air was heavier than warm air and she liked her Coke just this side of frozen.

He didn’t find one Pepsi in the bunch. He closed the door and smiled. Ecaterina must not have been in here lately.

A moment later his Empress came out of her room decked in a blood-red suit of armor that gripped her body like latex. He was surprised to see that her boots had a two-inch heel. “What is that shit?” he murmured when she winked at him.

“I told Jean if she didn’t figure out how to give me heels, she could keep the next suit of armor. Apparently,” she looked down at her feet, “this armor can be manipulated to be flat for fighting or have heels.”

She started toward the door. “What else can it do?” she asked as John Grimes, her friend, guard, and presently amused male human, followed her out of the suite.

Captain Brell examined the two officers responsible for the boarding action. He pointed to the Skaine on his left. “Officer Strill, you are responsible for making sure the bridge is under our control. Shoot one of the bridge crew as an example. Be certain you point out something he has done wrong before you blast his head off.”

“What if they haven’t done anything wrong, sir?” Strill asked. “I know we are supposed to find something, but…”

Brell wanted to slap his officer. Unfortunately, Strill was the most competent to accomplish this operation. His previous boarding officer had died in a poorly-executed bridge encounter. “Skaine always find someone to kill. It keeps the sheep docile.”

There was a moment of silence as Strill thought about Brell’s comment. That was Skaine 101, but until his people had to do it, they rarely thought about the “why.”

Strill finally worked it out in his head. “I understand, sir.” This time, Brell thought there was something new in his voice. A moment later, the captain smiled. It was the sound of a backbone growing.

“Make it happen, both of you.” Brell looked at them. “I want them to show respect for Skaines, and I want this to be the F’zeer’s life-changing haul, got that?” His stern visage made the impression he was looking for. Given that the F’zeer’s had supposedly been recognized and its information sent back to the misbegotten Etheric Empire— and that bitch of an Empress—was it too much of a risk to seize the K’Leen II, or should they just blow it?

Brell’s eyes narrowed as he turned his head to his right. “Officer Mobik, I want you to see what type of engines they are using and if they are in perfect working order before you lock them down.”

“Seven hundred and seventy-fucking-five!” Tabitha spat and then jumped up, pointing to Hirotoshi. “Ha!” She turned her face toward the speaker. “Thank you, Captain. We will be there in a moment.”

“That would be appreciated. The Skaine are known for their rather aggressive methods of keeping a ship’s crew in line.”

“Yeah.” Ranger Tabitha grimaced as she locked her tools around her body. She couldn’t bring her favorite coat on this trip. “The Skaine didn’t get that memo.”

“Or,” Ryu set his headgear in place and spoke through his subvocal connection to Tabitha, “they might not see it until Achronyx bypasses their security and places it in their queue.”

Hirotoshi, Katsu and Kouki stopped at the door before they deployed to protect the ship from the inside. Hirotoshi winked at Katsu and spoke to Tabitha and Ryu. “Then he back-dates the memo to show they always had it.” He paused a second. “That’s not very Rangerly.”

Tabitha smiled but stayed quiet. As the three went down the hall, Katsu opined, “But it is very Tabitha.”

“Have I told you,” Tabitha said conversationally, as she and Ryu paused in the doorway of the small, specially-built exit from their hidden section of the hold, “that I am starting to like these zero-gee trips?”

Ryu looked around at the brightness of space. The ship they were about to leave had slowed to almost stationary. The pirates had caught them at a logical and tenuous location. They didn’t have enough delta-v (velocity) to escape, and the ship was turned the wrong way, anyhow. These large commercial ships were useless for any sort of maneuvers. “That is because we have the flight suits.”

“Well, perhaps.” Tabitha admitted as their suits pushed them away from the K’leen II toward the F’zeer. “Huh, would you look at that?” Tabitha pointed toward the location where the ship’s moniker was supposed to be painted. “Seems like the captain’s database was accurate.” Ryu looked in the direction her arm was pointing and had to admit that the poorly-erased name gave lie to the F’zeer designation. Tabitha toggled the HUD command to enable her helmet-cam to take pictures.

“You know they will probably try to sabotage the ship, right?” Ryu asked. After all these years with Tabitha, he still couldn’t figure out just how strategically aware she would be in any given situation. Usually, she was intelligent enough to overcome the advantages his age difference and accumulated wisdom gave him.

Other times she would step off the top of a building, forgetting it was three stories down.

It was always a tossup which Tabitha he would get.

As the two of them drifted down the length of the K’leen II, Tabitha unclipped two pucks from her belt. Both were about three inches in diameter. She casually tossed them toward the back of the ship and ignored where they were headed. “Achronyx, make sure those end up someplace that will cause massive problems with their engines.”

Her EI’s voice came over her implant, “Engines always have problems with them, I understand.”

“Yes, they do, you know?” Tabitha mused as the two of them engaged their suits’ cloaking abilities. While a sharp alien might still be able to see them if one should be looking, there wasn’t a technology known that would be able to locate the two humans as they broke away from the protection of the commercial transport and headed for the pirate vessel.

“Are you into their computers yet?” Tabitha asked her electronic companion.

Achronyx came back, his voice modified to sound offended. “Katsu could have broken their security blindfolded.”

“Yes,” Tabitha mused, “but you didn’t answer my question. Are YOU in their systems?” She chuckled.

“Is that supposed to be a joke?” the EI asked. “Please clarify, because I am working to alleviate your concerns where my communications have caused friction in our relationship.”

“Uhhhh…” Tabitha came back after a couple of seconds. “The hell, Achronyx? When did you start caring?”

“I notice you didn’t answer the question,” the EI responded. Tabitha couldn’t tell if his voice sounded smug or curious. Before, she would have assumed smug.

“I’m off my damned game,” Tabitha muttered. This time her comment wasn’t passed through to her EI.

The beta readers are almost finished, the Editing is almost done, it should go to JIT within about 24-36 hours…Release by the 1st for sure, hopefully sooner!