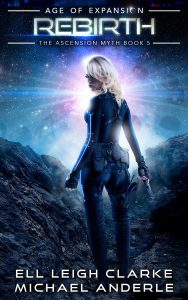 There was a bustling of nervous tension throughout the ship. Crash glanced down at the controls, watching carefully as Sean eased back on the velocity.

Sean continued with his announcement. “When we head into orbit, we’ll need to be cloaked. But remember: I can’t deposit you guys onto the skylift unless we’re uncloaked. So you get one chance. You need to get out, and then move, because there’s no coming back until Oz takes out the weapons systems.”

Joel and Jack looked at each other confidently as they sat in the main lounge in the Empress. Joel nodded. “We’ve got this,” he told her.

Jack pursed her lips in determination, and returned the nod before looking over to Paige. “Think it’s time to wake the walking Buddha?” she asked, indicating with her head toward the back of the ship.

Paige’s look went from anxious to task-mode. “Yes,” she agreed. “She said to give her as long as possible, but I think it’s time.”

She got up from her seat, and headed back to the cargo hold. On her way past, she brushed Pieter’s leg, pulling him out of his intense concentration. He looked up and saw Jack looking back at him.

Pieter nodded. “Yep. Oz is confident. And if all goes according to plan, we’ll be good.”

Joel stood up, stretched, and started warming up his muscles by moving around. “It will all go according to plan,” he told them, back in Space Marine mode. “And if it doesn’t, we’ll kill whatever we have to until it does.”

Jack grinned, feeling the tension in her own body break. “And that’s just how we roll, eh? Mr. Don’t-Fuck-With-Me?”

Joel nodded. “That is how we roll. We work for the Queen Bitch, now. We have standards to uphold.”

Jack felt a sense of pride swell in her chest as he said that. She glanced back at Pieter, and his smile suggested he was feeling the same way.

Paige came striding back down the aisles between the anti grav chairs. She was raising her eyes to the heavens.

Joel watched her returning. “What’s up?” he asked, concern in his voice.

Paige tried to hide her grin. “Her ladyship is jonesing for a mocha! Of all times!”

Joel grinned as he started checking his weapons and strapping on the additional pieces of body armor that had been sitting one seat over from he and Jack. “I thought it made her nauseous?”

Paige shook her head. “So did I. But, apparently, she wants some.”

Paige strode past the group and over into the far corner of the lounge where there was a custom-built mocha machine. In all their time training and performing simulations, it had become apparent that any time spent on the ship was going to require mochination of the highest quality. And so, Brock was instructed to install a state-of-the-art mocha machine, which didn’t rely on gravity for it to work.

“I mean, you wouldn’t expect us to go without restrooms, would you?” Molly had justified when she broached the subject in one of their team meetings.

Back in the cockpit, Sean and Crash remained focus on the flying. Crash had clocked about 40 hours in the last week, but wasn’t feeling confident enough to take primary. Sitting next to Sean, his attention now on the controls of the ship — rather than the navigation he’d managed to help with — his attention was unyielding.

Sean pointed to another holo representation. “Okay, now we want to drop out of warp,” he told Crash, waving his finger at the dial next to a graphic of some kind of warp engine, before knocking the dial down.

He paused for a moment, thinking. “And then, we want to maintain our course, which means…?” He glanced over at Crash for an answer, pausing his actions so as not to give away the next move.

Crash thought fast. “Which means… we need to kick in with the boosters on automatic course correction, to counter the directionality of falling out of warp drive.”

Sean made the necessary switch, and slowly brought the boosters online, engaging them at 80%.

Crash sighed in relief, realizing only then that he had been holding his breath.

Sean glanced over to him briefly before looking back at the console. “It’s okay. You’re doing great, mate.”

Crash bobbed his head, his wrinkled forehead showing how uncertain he still felt. Flying had always been his superpower. He’d been flying the weirdest and most dangerous ships and missions all his grown up life. And yet, navigating the Empress was a challenge he never thought he’d face.

A female voice interrupted their conversation over the audio feed. “Sean, are you ready for an update on maneuvering into orbit?”

Sean flicked another switch without taking his eyes from his panel. “Yes, please, Emma” he replied.

“Okay then,” Emma responded. A new screen overlaid itself over the main window in the space ahead of them. “We are sixteen minutes from joining their orbit. The planet has fifteen space lifts, and there are twenty-three satellites in orbit. Plus one space station. I have plotted the optimal route which will bypass their normal routes into orbit, so we will mostly avoid contact with any other vessel.”

Sean’s frown deepened. “Is that the best we can do?” he asked.

Emma’s voice was firm. “Given the parameters, yes.”

Sean wasn’t convinced. “So if we end up colliding with another vessel in orbit, or on approach…?” he asked.

Emma responded immediately. “Envelope maneuvers, baby,” she told him. “I know it’s what you like.”

Sean grinned to himself as Crash watched him. “Oh, Emma, you little minx. You know me so well.”

Emma’s face came onto the video feed in the corner of his console. “Well, I find it helps with keeping you in line. And FYI, I shared my heuristics of you with Ozymandeus for his people-behavior project.”

Sean shook his head in disbelief. “Women! Can’t you ever keep your secrets to yourselves?”

Emma smiled on the video feed and responded calmly. “Not when it comes to our fellow entity intelligences, no.”

Sean grinned. “Right, I’m going to make sure that these rogues out back are ready to jump. Crash, can you keep Emma company for me, please?”

Crash was still deep in concentration. He woke himself, breaking his gaze from the panel he had been watching. “Sure,” he agreed, his face just as expressionless as ever.

Sean left the cockpit and wandered through the narrow passageway into the lounge area. He arrived in the doorway to see Joel and Jack doing their final prep. “Someone told Molly it’s time?” he checked, mild concern on his face; he was worried that she might be sleeping.

Paige looked up from her holo. “She’s-”

“Right here,” Molly finished her sentence, appearing at the back of the lounge. She was in full combat gear, ready to go, holding her wooden baton. Her face was eerily peaceful, and her manner relaxed.

Paige spun around in her chair to look at her. “Mocha is just brewing,” she told her, indicating over to the machine.

Sean looked at Molly, then at the mocha machine. “Will you never learn?” he asked her. His tone resembled how a parent would talk to a child.

Molly held his gaze as she strode deliberately through the lounge. Sean suddenly felt strangely intimidated by her presence and her quietness. Give him geeky Molly. Give him matter-of-fact Molly. Give him amped-up, kicking-his-ass-across-the-gym Molly. But meditating Molly… He couldn’t get a read on her.

She got close to where he had planted himself at the end of one of the aisles. Feeling her come closer, he was unable to stay where he was. He took a couple of paces backwards, and Molly walked straight past him to the mocha machine.

It had stopped pouring mocha into the anti grav mug beneath, and she picked it up, taking in the aroma and savoring the smell. Joel and Jack had turned to look at her, and were watching her enjoy the moment of her first mocha after a long meditation session. She breathed it in, and then gently took a sip. She exhaled slowly in pleasure.

Turning around, she smiled at the crew. “So, what are we doing standing around, bitches? Don’t we have a mission to complete?”

FROM MICHAEL >>> Car buying is never (so far for me) a lot of fun and yesterday while here in Austin, we helped a family friend’s daughter at a local Subaru dealer (she went for a Crosstrek).

I’ll have to give the local Austin Subaru dealer some kudos as not only was the dealership cool (they have a cafe with free snacks and nice digs in the back while you wait), but her salesperson (John … something something) (big guy) was fantastic.

By the time we were done, it was all I could do to stumble into our hotel room.  Even though we are here at the Radisson on the river, just a few blocks from 6th street, I didn’t care to step out of the hotel. Right now, it’s something like 9:45 AM and I just rolled out of bed, and it (the bed) is calling me to come back.

The siren call of sleep is a sweet soothing sound and promise of happier hours… Less productive hours perhaps, but happier times this afternoon as I’m a grumpy guy at the moment whose head is lolling to the left as I type this.

Damn, I think I need to go back to bed.

ENJOY this second snippet, as we work our way towards release tomorrow 😉