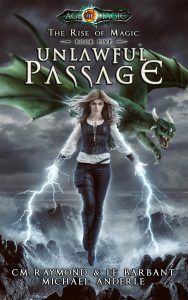 From their altitude, the strip of land dividing the two massive bodies of water appeared the size of Hannah’s middle finger. She laughed as the wind whipped through her hair and Sal’s scales rubbed against her thighs as she gripped him for dear life.

Between Hannah and the foreign ground below, floated the airship, which looked like a child’s toy from their altitude. They had been flying east on the ship, which Parker had taken to calling the Unlawful, for days on end. Ezekiel, as curious and coy as ever, had asked her and her friends to join him on an epic quest to save the Oracle, Lilith, and with her, all of Irth.

You know, no big deal.

She didn’t know much about what was waiting for them at their destination, but so far, the epic world-saving quest had consisted mostly of watching Laurel and Karl bicker on the deck of the ship while Parker and Hadley sought to one-up each other.

Hannah had come to love their flying home, but as she and Sal soared through the spotless blue sky, she was happy to put some space between her and it — at least for a second.

Gripping harder with her legs, she reached back and pulled her hair into a ponytail, before shouting the command.

“Dive, you lazy wretch,” she screamed at the dragon, her voice hardly winning over the howling air around them.

Sal tilted his head back toward Hannah, and shot his tongue out of his mouth and back in before snapping his body up toward the sun and whipping it around back toward the world below.

“Shit!” Hannah yelled as they picked up speed, plummeting downward to the strange land.

Arcadia was hundreds, if not thousands of miles behind them. Despite the fact that she had lived there her whole life, the city felt like a dream from her past.

Adrien was dead, the injustices that plagued her and her friends defeated. Hannah had assumed that once she avenged her brother, she would get a chance to relax. Live a normal life. But if the dragon under her was any indication, she would never experience anything close to normal ever again.

On days like this, she was absolutely fine with it.

As they descended, the land looked less and less like a child’s drawing and more like the real world. She craned her neck as they passed the airship, but they were moving far too quickly to catch a glimpse of her friends watching them in awe from the deck.

The ground was coming fast, making her grip more tightly. With Sal’s speed, she swore they could crash straight through and onto the other side.

“Sal?” she screamed, but her words were sucked out of her mouth by the wind which threatened to pull her from the dragon’s back. “Sal!” she tried again.

The blur of the world beneath took on detail, and she could see the ruins of a city, a place that would have been a major point of human dwelling before the Age of Madness. She screamed again, but this time, only in her mind. She felt her creature’s muscles tense in response. They were tied together, and he knew exactly what she was thinking, but he still dove.

Ruins of a tower, not unlike the one she and Ezekiel called their own, rushed past. The windows blurred into dark lines as the ground rose up to meet them. Hannah fought the urge to close her eyes, and at the last second, Sal shifted his body — his wings grabbing at the hot air which surrounded them.

Just before the impact that would have made them both splotches of flesh and blood on the remains of the street, he pulled out of the dive and drifted lazily between the ruins of the ancient city.

Hannah’s heart pounded. “Yeehaw!” she shouted into the quiet oblivion that surrounded her.

Sal slowed his flight, circled over a clearing between what remained of four ancient buildings, and settled down with a thump. His wings folded onto his back, and he glanced back at his master, beady eyes blinking in her direction.

Hannah laughed and slammed his side with an open palm. “You are one bad ass son of a bitch.”

He laid his jaw on the ground, allowing her to throw her leg over his head and dismount. As her feet hit solid ground, it took a second for her head to stop swimming. Looking back at Sal, she said, “OK, enough showing off. I won’t call you lazy ever again.”

She surveyed his body. Once the dragon was a common newt on the streets of Arcadia, but now he had grown to the size of the biggest carts that were used to haul amphoralds into the city from the Heights. But as far as she could tell, he hadn’t grown for a while. Which was good, considering their accommodations aboard the ship that once belonged to Adrien, the tyrant of Arcadia.

Maybe he had reached his peak.

Despite their closeness, there was so much she didn’t know about the dragon. Zeke, the most experienced person Hannah had ever met, claimed to never have seen magic quite like it. It’s part of what made Hannah so special.

She gave one more pat to Sal’s side before turning her attention to the ruins which surrounded her. The broken buildings loomed skyward on every side, and she felt strangely hedged in by them. She had never seen so many artifacts from the age before. Rubble was strewn out around her, but she could almost imagine the city, built by machines in a day long forgotten.

Now, little remained that could be called civil. But it was the silence, more so than the buildings themselves, that made her feel uneasy. It smothered her like a thick fog.

“You smell anything, boy?” she asked, glancing back at the dragon. He had already closed his eyes — and she could hear his faint snoring. In a minute, it would be a rumble. “I’ll take that as a no,” she said.

She turned her head back toward the airship, wondering if Ezekiel knew they had taken to the ground. He had warned her to stay in the air. Their mission was far too important to risk the dangers of the world beneath their flying fortress. But the airship was too boring. She had lived all her life in one place. To not look around seemed like a waste.

Even so, she hoped the old man was ignorant of their entrance into the city.

Before she could think about her mentor any further, a scream cut through the silence of the ruins. She jerked her head in the direction of its source as the sound reverberated around her.

Sal was awake in an instant, fully alert and staring at his master.

“Let’s go,” she grunted as she took off down the city street, dodging the rubble in her path. Sal followed, hot on her heels.

The scream resounded again. This time, the words were clear. “Help!” a shrill, high voice exclaimed.