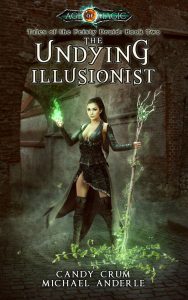 The Undying Illusionist, Tales of the Feisty Druid: Book Two

I’ve been having a lot of fun chatting with you guys, reading your comments, and the reviews (oh, the sweet, sweet reviews!) At this moment… The Arcadian Druid is STILL sitting at 100% 4 and 5 star reviews!!! This… Is huge. I am SO happy to see that! Thank you!

You know what else has been amazing!? You guys have been checking out my other books as well! DAMN PEOPLE!!! Try not to make my heart explode with excitement and happiness TOO soon in the game, OK? (That was a joke… please keep trying. It’s okay! I LOVE seeing the love going to the other books hahaha!)

In case you’ve read Michael’s author notes from the first book, I wanted to point out that – YES – he probably did have to edit out a lot of my exclamation points. As you can see–I love my punctuation. A lot…

It’s kind of a running joke now, that and my name.

I love these guys, and I have loved working with them AND engaging with all of you. Please, please, please — never stop. We love to read the comments and the love.

Long gone is the days where authors were just a name and a few hundred pages of doorway into their freakish minds. Now… You are more than welcome to chat all day with us and experience our freakish minds as soon as we get a minute to break away and respond! And we love it!

PLUS–it gives us a chance to have HUMAN conversations. Imagine voices talking to you all day… Well, that’s basically what being an author is.

Wait… Other authors feel that way, too, right? Otherwise, I MIGHT BE going loopy for real!
​
Before I get myself committed, and I can’t finish the other books… *le gasp!* … Here is Snippet One! The Prologue to Book 2… The Undying Illusionist.

To find out more about Candy and her other books http://www.candycrumbooks.com