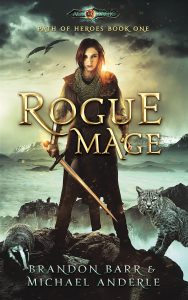 “Watch this,” called Payetta, dragging the body of a raider she’d killed the day before beside his dead companion.

Justen was rummaging through one of the men’s packs. He’d been scouring them ever since they’d arrived back at the kill site that morning. Finally, Justen looked up from the pack. “All right, let’s see this big show you’ve been promising.”

She closed her eyes and focused her energy on the tree roots. Lying on the ground above was the dead raider. The dirt and pine needles surrounding the corpse began to shake, then split. Striking up out of the ground rose a myriad of snaking tendrils. She directed each on a precise course, sliding them around the man, wrapping him in a wooden embrace. She was like a spider spinning a victim in her silken web.

As she wrapped him, she focused another portion of her energy to the other nearby body, locating it in her mind while not releasing her hold of the pine tree. Slowly she drew out another branch of roots and slid them over the second man she’d felled yesterday. The one She Grunts had sprayed. The one she’d used her wooden sword on and her husband was none the wiser.

Once both dead men were entangled, she pulled them down into the earth. Using more roots below ground, she upheaved and churned the soil, creating room for the two bodies. She opened her eyes a crack. Visually, it was morbidly stunning. The men appeared to be sinking into the earth.

Payetta finished the burial, then released her grip on the trees, pleased that she’d finally gotten a fingerhold on the art of controlling two living things at the same time.

Trees were a good first start, next she hoped to succeed at animals, a much more difficult task that required greater concentration. She’d come close several times, but the exertion had left her exhausted. Time would change this, as it always did. The more she flexed her mental power, the stronger her stamina and magic became.

“Thank you,” replied Payetta with a slight bow. “If you’d get up at dawn with me, you might glimpse all my secrets.”

“You’d find ways to hide them anyway,” Justen mused. “Besides, Cluckruck and I like to sleep in together.”

Payetta snorted. “You and that lazy chicken.”

Cluckruck was their faithful egg-laying chicken, and she was as fat as a river toad. Whenever they slept at Honey Hideout—their preferred place to spend the night—Cluckruck would roost in Justen’s tangled hair and wouldn’t get up to dig for worms or lay eggs until he stirred awake.

“I’m just proud I was able to heal you,” replied Justen. “I don’t know how you do it, but I’m exhausted after I do magic—no matter how piddly it is compared to your stuff.”

Justen folded his arms and frowned, but she saw right through it. He was hiding a smirk behind those deliciously shaped lips. “Is that another comment about my stamina last night?”

“Not at all dear,” purred Payetta. “You were very powerful…while you lasted.”

Justen dipped his head, a smile breaking through his serious facade. “Outlasting you is like trying to drink up a river.”

“That’s ridiculous. I have my limits.” She winked. “We just haven’t discovered them yet.”

Snippet One and Snippet Two were action scenes, so perhaps a short, casual, body-burying scene with a little husband and wife humor might be in order. Enjoy!

Check out Brandon Barr and his other books at http://www.brandonbarr.com