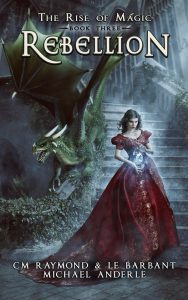 Rebellion: The Rise of Magic, Book 3

We’re thrilled to announce that the audiobook of Rebellion: The Rise of Magic, Book 3 is now available.

When you sow tyranny, you better be prepared to reap the rebellion.

Hannah and Ezekiel dig deeper into the corruption of the Noble Quarter, and the sick truth of Adrien’s master plan becomes clear. They need to call upon the diverse group of those loyal to the cause in order to stop the Chancellor’s reign of terror – before any more innocents die by his hand. Meanwhile, Karl and Parker enlist a powerful ally to help them battle against the Prophet’s lies, and Gregory prepares for something far more dangerous than battle – a formal ball at his parent’s house.

Sometimes, rebels have all the fun.