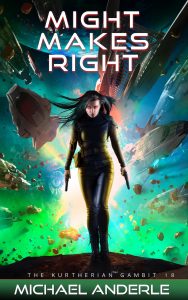 Torik, the Third of the Seven, looked at Supreme Fourth Maliki and asked, “How are our efforts to drive them from the Testing System going?”

Torik nodded. It was the same answer he had received three times before. Now, with their most recent effort a week in the past, it was just another example of a waste of their resources.

His role was to handle resource management for the efforts to elevate—and incidentally modify—this race. The actual killing of participants in the Testing was designed to facilitate Prime’s effort to genetically enhance the Leath as a people. That the Leath believed their clan were gods was to be expected.

Because they effectively were. Power and ability to change whole races and worlds did put them into the godhood bracket. Clan K’gurth, and specifically their branch, were the future of Clan Phraim-‘Eh. Now they would explain to those who had cast them out why they reveled in the purity of Chaos.

The pure math that predicted the future.

“I will take the information you provide and consult with the Seven. We will have instructions before the next Testing for you to implement, Supreme Fourth.”

The Leath military head bowed and left the holy location. He always felt exalted when he spoke to any of the Holinesses. But why would he expect any less when speaking with gods?

Kevin was working at a large table, space displayed by a holographic projector above. Stephanie, beside him, was arguing with him as Bethany Anne, Lance and Bartholomew entered the Base Development offices.

Neither of them turned as the three started talking softly between themselves.

“Do they realize we are here?” Bethany Anne asked her father.

“Doubt it,” Lance answered. “Occasionally Kevin would get into arguments back in Colorado having to do with the base, and he could become laser-focused on the situation. Especially,” he nodded at Stephanie, “if it was a spirited debate over engineering versus proper base arrangement.”

The trio listened as the two deliberated the merits of the latest project they had been assigned.

“That,” Kevin pointed to a rather large asteroid and highlighting the huge chunk of rock, “is not going to work well for defense purposes. There are too many odd angles, and it would take a goddamned lifetime to install enough protective emplacements to cover all of the—”

Stephanie, the half-Japanese engineer Bethany Anne and her father had hired years ago, wasn’t budging an inch. “We can cut the peaks down!”

Bethany Anne thought she noticed Stephanie’s hand twitch as if she were considering empasizing the statement with a slap to the back of Kevin’s head.

“Why would we want to spend the time cutting this shit down,” he shot right back, “if we have three other selections, each of which is better?”

Kevin looked at her, “I’ve read them. What I don’t understand is why the percentages matter, since the numbers don’t seem to be that far apart.”

Stephanie stopped a moment, mouth open. Closing her mouth, her eyes narrowed. “You read them?”

“Hell yes, I read them. I’ve learned to make sure I am prepared. Are you?”

Stephanie ran her tongue around her lips a moment. “May I?” She nodded to the display and Kevin waved a hand, offering her the opportunity to take over. She stepped up and touched the four rocks hovering above the table in the display, then spoke. “Reynolds, please get rid of everything but these selections and then provide me the top five types of rock which make them up by percentage, listing below each.”

The three watched, entranced, as the two continued their discussion.

“Left is my selection labeled one, the other three are options. Now, the difference,” she swiped a couple of controls, causing small space ship animations to start attacking all four rocks, “is what can create an unstable dissonance in the core of each asteroid. You will notice that Asteroid 21 has a dissonance frequency similar to Asteroid 88.” She pushed up the controls as Kevin watched, mesmerized.

“Granted, this isn’t the most likely event, but should someone attack 221B using two asteroids at points,” she lifted a hand to indicate, “A here, and B over there, the asteroid will crack. There is a small problem with it.” She pulled her hand back and crossed her arms over her chest. “We could engineer a method of reducing the risk.”

“But why take the chance,” Kevin finished. He was chewing on the inside of his lip, deep in thought. “Ok, you are saying it’s a small chance, and I agree. But,” he nodded to the asteroid she had listed as her first choice, “how are we going to get that hunk of rock prepared in a timeline that works worth a damn?”

“En route?” Bethany Anne asked, startling the two in front of her.

“Damn,” Kevin put a hand over his heart, “don’t scare a man like that, Bethany Anne. He’s likely to have a heart attack and need mouth-to—ooof.” Kevin finished, Stephanie having punched him in the ribs.

“If you don’t focus, I’ll give you mouth-to-mouth.”

“That was my intent,” he interrupted.

“You didn’t let me finish!” Stephanie eyed him.

“That’s right,” Kevin agreed, “and that is because whatever you have to say will be infinitely less enjoyable than my version.”

Bethany Anne wondered how, after all of these years, these two maintained both a working and a personal relationship. Stephanie preferred to keep the two separate, and Kevin preferred to annoy her.

Bethany Anne would have thought the ex-Army man would have been all prim and proper, but not so much.

“En route.” Stephanie ignored her husband. “My thought is we figure out the best solution for the external design for the mobile ESD and then emplace a field like we have here on the Meredith Reynolds to push attackers into a defined funnel, moving them away from locations we are concerned about.”

“To some killing fields.” Kevin nodded. “How long would that take?”

“Depends on how many and where,” Stephanie temporized. “If we can agree where the ESD beam will be set up, then we can—”

“Have we have heard enough?” Lance asked the others. “I know these two can continue like this for a while.”

“I’m good,” Admiral Thomas admitted. “I think they will have a satisfactory solution…sometime.”

Kevin put up a hand to pause Stephanie and turned to the three. “Give us three days.”

“Two,” Stephanie added after him. “He’s padding our effort here. We will have the core worked out by tonight.”

“The morning,” Kevin corrected. “She won’t be sure about her answers until she has slept and confirmed she agrees in the morning.”

Stephanie paused a moment before nodding. “Yeah, he’s right. Assuming I’m good in the morning, we’ll do the calculations and have our temporary solution to you before noon.”

Bethany Anne nodded. “How long until we are functional?”

Kevin and Stephanie looked at each other. “Twenty-four months?” he asked, and she nodded her agreement.

“Good.” Bethany Anne smiled. “You have eighteen.” Reaching out, she grabbed the two men and they disappeared.

A moment later Stephanie broke the silence. “We didn’t need twenty-four months.” She eyed her husband. “Why did you tell her that?”

“Because,” Kevin replied, “I know Bethany Anne. We really need what, about twenty months?”

“If we had told her twenty, she would’ve given us fifteen,” he finished.

Then, the nest is empty.

It’s feeling very weird, and very melancholic at times. I’m glad I’m not trying to write at the moment, because the emotions are are pretty up and down.

However, I’m not the first parent feeling these things, nor will I be the last I’m sure (and I hope – I’ve no desire for mankind to go down the tubes right now.)

Busy with boys birthday today, but we will be releasing to Amazon tomorrow (US – For my Australian fans 😉 )