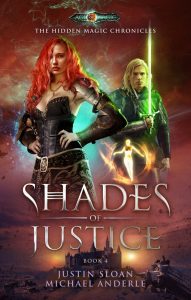 Fires smoldered, sending a steady plume of black smoke over the town supposedly populated by water mages. The sight was enough to give Andreas doubts about their location. How could water mages have let this happen?

Still, given all the fighting he had seen—including the crazy sorcerers—it wasn’t unthinkable. Why nobody had bothered to put out the fires, though, was another question.

“Looks like we’re too late,” Lars said as they came around the bend, now better able to see the town that had been destroyed.

“Wait… There!” Kim was at the wheel of the ship, eyes narrowed, pointing.

Sure enough, someone was moving toward them, and then they saw more than one. A whole group was coming their way.

“That’s what we’re about to find out,” Andreas replied, staff gripped firmly in his hand. If there was trouble he was ready to get them out of there quickly, with a little help from the waves and wind.

“Would you look at that?” Kim exclaimed. “Horses!”

Andreas couldn’t believe his eyes. When he had found out the woman named Rose had a horse—made to look like a unicorn—he had been amazed. But this? These people had three horses!

The woman at the front of the group stopped on the strand, and the others formed a half-circle around her. She waved her hands and lifted them, and the water in front of the boat surged up and formed what looked like a mighty guardian of the sea. It wore a crown of kelp and its flowing water was pushing toward them, although it looked solid.

It held out both hands in a gesture that seemed to tell them to stop, and at the same time could have been threatening. It looked like the giant water spirit could come crashing down on them at any moment.

Andreas wondered what his stormcalling ability, as limited as it was, could do against this. He could already taste the saltwater in his mouth, as if he were drowning—being cast to the depths of the ocean, never to breathe again.

But the attack didn’t come.

“Announce yourselves!” a woman’s voice called from the shore.

Lars stepped forward and bellowed, “Alastar and Rhona sent us. We are looking for Leila Lockmire.”

“You have found her,” the voice said, and just as quickly as it had appeared, the water spirit vanished. “Approach, but know that if you are not who you claim to be, we will not hesitate for a moment to cast you back into the sea. Understood?”

“With complete clarity,” Lars shouted back, and then turned to Andreas. “Bring us to shore.”

Leila waited, watching the small boat unnaturally work its way toward shore. Somehow it was moving against the wind without oars. A water mage, perhaps? The energy it would take to force the water to push a boat, even one that size, seemed unrealistic. So either they had a very powerful water mage, or some other sort of magic user.

If one of the sorcerers were among them, she would find out and destroy him.

She heard the crunch of rocks and dirt under boots and turned to see her son Gregory approach.

“What do you make of it?” he asked. “Maybe we shouldn’t let them land at all.”

She shook her head. “We ate with them, Rhona and her Alastar, had them under our roofs. I trust them. If they sent these three, it’s worth finding out why.”

“But you see what I’m seeing?”

She nodded. “Which is why I’m going to be on full alert, and you’ll tell the rest to do the same.”

Gregory nodded, then moved back to the others to convey the message. While the passengers were unloading from the boat, the group worked their way over to them to get a better look. This trio was clearly not from around here, and each was aged beyond their years. Eyeing them with curiosity was a frail boy—in his late teens, she guessed. He wore robes and held a staff, similar to what she had seen in her brief encounters with Storm Raiders. So that’s how they had moved so fast! But these clearly weren’t Storm Raiders. After giving the Barskall a chance and being betrayed, she might have given the order to attack right then if they had been.

Still tying up the boat was a large man with a scruffy beard and a giant war ax on his back. He paused to help a woman who was arguably not much smaller than him from the boat.

When they approached, Leila held out a cautionary hand. “That’s far enough. We don’t have much to offer. We have only a few spells and swords to our name. Why are you here?”

“I’m Kim,” the woman introduced herself. “This is Lars and Andreas. Honestly, we’re just on our way home, back to the Kaldfell Peninsula, but Alastar and them wanted us to stop by to invite you and yours to join the fight. They’re riding against the goddess and her sorcerers, against the north.”

“We’ve been a bit quick to trust lately,” Gregory said, stepping forward and eyeing them up and down. “Why shouldn’t we put you down where you stand?”

“You could try,” Lars replied with a grunt and frown of disapproval. “And then the good side of this fight would have one less clan boy, and I’d live a life filled with regret.”

“No threats here,” Leila said, then held a hand up to stop Gregory from saying anything further. “We’ve seen enough bloodshed.”

“Well, know this,” Lars replied, “Master Irdin is dead. Some other powerful witch? Dead. The king of Gulanri has come north to join in the fight, and it promises to be a good one.”

Now he had her attention, but she turned aside, mulling this over. If the king of Gulanri had truly come north, that meant a united Lost Isles—and united under the right side. There was no way they could sit this one out.

“We accepted outsiders into our midst,” Gregory replied, and then spat.

“Barskall, to be precise,” Leila added. “They turned on us. Our so-called victory sure doesn’t feel like one, not with all the lives we’ve lost.”

“It was the same everywhere, but we’ve beaten them back,” Kim said. “Even their goddess is on the run, heading north.”

“They think the northern clans are on her side?” Leila asked.

Kim glanced at Lars, who nodded.

“Well, I know of at least one clan who won’t be.” Leila leaned back with a smile, looking out at the water and imagining it now—her sister, who had moved up north in pursuit of love. If she got her hands on that goddess, the fight that would ensued was bound to be monumental. With a glance at her son, she said, “We’re going.”

She nodded. “But first west, to see if we can meet up with Rhona and the rest. If they’re in pursuit, at least some of them would take the pass. That’s where we meet them.”

Gregory beamed, apparently eager for more of a chance to get his revenge, or maybe at the mention of a certain woman?

“Still with that Donnon chap, then?” Gregory squinted, giving a small shake of his head as if that would affect their answer.

“Keep dreaming, if you have your eyes on her,” Lars replied. “Those two are like carrots and potatoes.”

“You know, they’d make a great stew. Or, a good one, but throw that girl Kia in there? She’s like the beef. Brings it all together.”

Leila smiled and gave him a nod, thinking maybe it wasn’t a bad thing these three were heading… She frowned, realizing she didn’t know where they were going.

“They sent you to give me the message, but then what?”

“We don’t know how far Lady Mowain and her Dark Society have spread,” Andreas answered, his eyes taking on a distant look and moving to the ground. “The people of the Kaldfell Peninsula need to be on the lookout, and we mean to warn them.”

“If it’s not already too late,” Kim added solemnly.

“Well then, you must go,” Leila stuck out her hand and shook with each of them. “And we must be on our way to join forces with the others. I will find my sister and her clan up north, and see if we have any other allies in that direction.”

With that she motioned for the rest of her friends, the only people who had survived the betrayal by the Barskall. They went on their way, and the three strangers on their own.