The QBS Princess Alexandria, In Transit 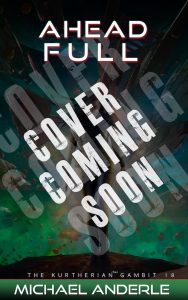 “Hello, my name is Franath D’Tzaa. I’m aboard the QBS Princess Alexandra, a Nacht Fleet battleship and presently the flagship of Empress Bethany Anne, who is returning with her team from Nodrizen’s World.

“What follows is a continuation of the interview we aired yesterday. In this section I ask the Empress about the Leath and how that relationship has worked for the Etheric Empire over the last few decades. And here she is…”

“Empress, the Etheric Empire has been involved in different arguments—some would say battles or wars—with the Leath for many decades now. Would you tell us why, in your opinion, these two powerful spacefaring races do not get along?”

The Empress leaned back in her chair, her initial smile fading. “Certainly. It has everything to do with the Kurtherians, who claim to be their gods.” She looked at the reporter. “You have seen our videos, correct?”

“Who hasn’t?” Franath replied. “Every few years there has been a battle on some world or another between the Empire and the Leath. Afterwards they spin their story, and your people provide video proof that they’re wrong. Unless someone was present for the altercation, it would be impossible to tell what is truth.”

“I believe quite a few of your audience know the history of the Kurtherians,” Bethany Anne replied. “There were twelve tribes, or clans, who believed they were ready to Ascend. They also believed they should help other alien species Ascend. Unfortunately, seven of the twelve went down a darker road, and their efforts to assist other races has somehow become twisted. Each of the seven clans support their races differently. Some, like the late Yollin king, used his advanced abilities to drive the native Yollins from power. From what we understand, the Kurtherians from the Phraim-‘Eh clan who rule Leath are working to move them up the Ascension path.”

Bethany Anne stopped a moment, pursing her lips in thought. “Well, their version of the Ascension path, anyway. There are many thoughts on that,” she clarified. “However, supposition is that for the Leath to gain the next level in their enlightenment, they must defeat the Etheric Empire.”

Franath looked down at her notes, then back up at the Empress, who was waiting patiently for her. The reporter finally spoke. “I’m sorry, but I can’t find where this has been mentioned before.”

“I understand,” Bethany Anne nodded. “This is supposition by a Kurtherian consultant…”

“And I’m not going to explain it to you,” Bethany Anne countered, “so don’t even ask.”

Franath bit her tongue. If she screwed up this interview, she would never get another chance with the enigmatic leader of the Etheric Empire, and probably wouldn’t leave with her interview material intact either. She was completely aware of others who had left with video the Etheric Empire didn’t wish to air, only to find the video damaged by the time the person was in a position to attempt to make a copy.

“Is this a business?” Franath finally asked, trying to find a way to score the contact. “Do they have additional resources I can verify?”

Bethany Anne sent TOM, Do you have additional resources?

I don’t know how to answer your question, Bethany Anne. Are you suggesting I out myself?

Ha…ha.  Believe it or not, being inside you hasn’t always been bitches and dreams.

What the hell, TOM? Bitches and dreams?

There was a momentary pause before TOM answered, Peaches and cream?

Ha! Bethany Anne barked a laugh in their mental discussion. That is the funniest shit you have said all week.

Ba-dum crash! I’ll be here all week. And next week and the month following and probably the next decade until we can go looking for a mysterious race of creatures who can pull me out of you.

Don’t worry, my friend. Bethany Anne turned her attention back to the reporter. I haven’t forgotten that.

Bethany Anne spoke to Franath. “I imagine this consultant could answer questions. However, he is, as you might imagine, not fond of having others know much about him or his location.” Bethany Anne crossed her legs, then leaned forward in her chair and winked at Franath. “I’ll give you a contact routing through the galactic mail.”

Franath wondered what was wrong with the Empress’ eye.

Bethany Anne leaned back in her chair. “To return to the topic at hand, we have based our strategy on what the Kurtherian ‘gods’ behind the Leath are doing. This is why we have played a longer game.”

“It has been,” Franath agreed, “some time since your last altercation. However, at this point both sides are again enhancing their militaries. In fact,” Franath glanced down at some notes, “this has caused fourteen different spacefaring races to embark upon their own military buildup.” Franath looked Bethany Anne in the eyes. “Do you have any thoughts about this?”

“About which part?” Bethany Anne asked, a glimmer of humor in her eyes. “That we haven’t fought in a while, that others are willing to support their own ability not to be pushed around, or something completely different?”

Franath considered her options, then asked. “The fact that other groups are building up their militaries.”

Franath waited a moment before realizing Bethany Anne wasn’t going to add to her comment. “Why?”

“As I mentioned, if you can put up a good defense then other races pause before trying to take you over.”

Franath continued, “Are there any negatives to other races doing this?”

“Of course,” Bethany Anne responded. “Those with large militaries start looking either inside or outside to see what they can do with that military. A despotic regime could take power and use the military to subjugate their own people, or a particularly aggressive group could come to power and decide to push their luck by attacking others.”

“Is this the reason the Etheric Empire keeps fighting the Leath? Or, at least, this is what you are proposing is the reason?”

“And why is that?” Franath continued.

Bingo, Bethany Anne thought. I love to answer this.

Bethany Anne looked into the camera, allowing the barest bit of red to infuse her eyes. “Because I really, really hate bullies.”

The video clip ended and the reporter finished her piece with, “This is Franath D’Tzaa signing off. I will provide another clip tomorrow from my interview with one of the most intriguing beings of our galaxy.”

FROM MICHAEL ANDERLE >>> WOOHOO!  Here we go again…BA’s Back…Back again… And it is TIME the Leath have their final discussion with the Queen Bitch.

Well, at least the Kurtherian’s and those that support them.

We are down to three (3) books left for the first 21 books of The Kurtherian Gambit, Bethany Anne’s First story. I am aware that a lot of fans are concerned about whether there will be any more Bethany Anne books, and I have provided the hint(s) here: http://www.kurtherianbooks.com/timeline .

Right now, this book is above 22k … ish… in words, meaning it is just under 1/3 of the way complete.  I’ve written more words this morning and I hope more words today before end of day.

I’m going to do the same thing I did a while back, which is start a ‘Michael has this many words done’ on Facebook, hoping that the interaction keeps me moving ahead through thick and thin. Especially tomorrow and Tuesday with three plane flights as we head from Rio to Miami, Miami to New York and New York to Las Vegas.

When we book these flights, we saved a lot of money routing through New York’s JFK airport vs. doing direct flights. Now, I look longingly at a flight home and think “What would I give to just fly straight to Las Vegas?” Then, I look at all those miles that will get me Platinum Pro status on American Airlines and think “Ok, I’m not willing to give up my chance to be Platinum Pro!”

I’m SUCH a pushover for this fucking American Airlines status. I mean, don’t get me wrong, I’ve benefitted HUGELY from the getting upgraded for FREE(!) from my seat in the back to first class over the last year. This was due to my wife’s Executive Platinum status (well, I was moved up to business class some times – but I really don’t know what the difference is between business and first class.)

I’m starting a set of scene’s with Stephen and Baba Yaga / Bethany Anne… But, Jennifer has been working on Stephen to not be such a stick in the mud… Then, it went too far and Jennifer is hoping Bethany Anne will pull Stephen back in line with his snappy comments.

Wonder how that will work out?