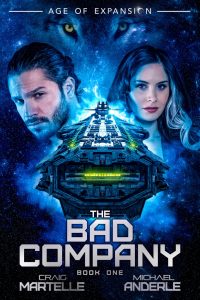 The Bad Company: The Age of Expansion Book 1

Humanity’s greatest export – Justice. Space is a dangerous place, even for the wary, especially for the unprepared. The aliens have no idea. Here comes the Bad Company.

An explosion sounded and plasma fire flashed before his eyes.

Hidden in a remote corner of the Pan Galaxy, Nathan Lowell sat in his private office looking at the video communication screen. The President of the Bad Company frowned.

His direct action branch was engaged and not in a good way. Nathan shook his head slowly as he watched.

Thirty seven star systems away, General Lance Reynolds saw the same images displayed on his monitor. He chewed vigorously on his cigar. The report wasn’t what he had expected.

Colonel Terry Henry Walton, the man in the image, looked back and forth between the screen and something to his left. Ominous sounds accompanied the image.

“This first mission wasn’t what we contracted for, Nathan,” Terry yelled at the portable console that sat with a sideways tilt. He stared at a point off screen, shook his head, and continued. “My first stop when I get off this rock is that dandy president’s office where I’ll wring his pencil-neck to get our thirty percent bonus and seventy percent kicker. And then I’m leveling his fucking palace!”

“Can you settle this with what you have?” Lance asked.

“I already told you once, call me, Lance.”

“No can do, General. Can’t have you thinking I’ve grown soft just because I’ve been a pseudo-civilian for over a hundred and fifty years. Hang on,” Terry’s smile evaporated as he looked off screen, his lip curling involuntarily. “SHOOT HIM!” he shouted.

The crack of hand-held railguns answered. Terry stabbed his finger at something neither Nathan nor Lance could see.

“Not that one, the other one,” Terry corrected. More cracks from the hypervelocity weapons. Terry nodded and flipped the bird. “Fuck you, buddy and your stupid looking stalk head!”

Terry turned back to the screen. “Where were we?”

“Something about you intending to level our client’s palace,” Nathan said coldly.

“After we’re paid, that is. Hang on,” Terry looked off screen, flinched with surprise, and started yelling, “Why won’t you die? WOULD SOMEONE KILL THAT THING!”

Terry continued to watch off screen.

A rapid barrage followed, then a brief silence, and finally a blast that nearly threw the colonel off his feet. Laughing, Terry brushed his uniform jacket with his free hand. “Come back from that one, you blue fuck!”

“Sorry, General, Nathan. There’s about a hundred times more of these crawly bastards than we were led to believe. Mano a mano ain’t working. For every one we pop, five more appear in its place. Gotta run. We need to lop the head off this dragon. Have your people call my people and we’ll do lunch.” Terry saluted and ran off screen. Plasma beams cut through the spot where the colonel had just been standing.

“I’ll call our least favorite client right now and tell him to stand the fuck by. I’m coming for a visit,” Nathan growled, eyes flashing yellow as his anger charged his Were form. He tamped down the urge to change into a Pricolici, an upright-walking Werewolf.

He didn’t have the luxury of tearing up the universe. He was in charge and had passed the mantle of Bad Company door-kicker in chief to Terry Henry Walton.

Lance Reynolds stroked his chin as he thought about the man who looked happy to be in the middle of a battle that seemed to be raging out of control.

Ahead Full – Snippet 02 of …
We Have Contact Audiobook Release!