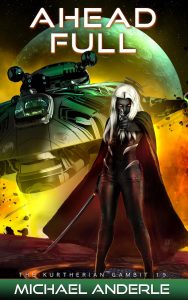 Hours later, the Leath Prime One Intelligence officer watched the interview in the comfort of his own living space. He had paid personally for the intelligence so it didn’t go through the Leath infrastructure, and at the moment he wasn’t sure if he had just damned himself or possibly liberated his people.

He re-watched the video one last time, trying to commit the information to memory. Then he shook his head. Getting up from his seat, he made his way to an old desk on the lowest level in his home. He opened a drawer and extracted an old tablet he had used in his youth before he could afford better tools.

He turned the unit on, surprised to see that it had been charged recently enough to still have power. He would have thought it had lost its charge over the many years since he had last powered it up.

He plugged in the password and was surprised to see a note appear.

“Hello, Jerrleck. This is you, from earlier in your life. If I am correct, you have had your memories modified by the Seven.”

Jerrleck stopped, realizing immediately that if he continued, whatever he learned could possibly be accessed by the Seven. He wasn’t sure how deeply they read minds, but he was positive they scanned his topmost thoughts.

He dared to read another line.

“If you read any farther, realize what I say below may possibly be discovered by the Seven.” Jerrleck smiled. At least the younger him and present him were both intelligent Leath.

“If you are still reading,” the note continued, “I have had plenty of time to realize what must have happened to our people, to me and consequently to you. Think about just how many Leath have been killed in our war against the Etheric Federation, and how many more will die if we continue this attempt to Ascend our people under the direction of the Seven.”

Jerrleck considered the truth of this statement. Only a few years ago he’d helped one of his best friends mourn their only daughter.

All because the Leath had been told to take over a world the Leath had no business or interest in ruling. He had done the numbers…

Jerrleck’s eyes opened and other information started pouring into his mind. He stood up and walked to the opposite wall in the windowless room. Feeling down a line, he found a small indention and pushed it.

Jerrleck stopped a moment, knowing this was his point of no return. He wasn’t sure just how long ago he had been mind-wiped, but it was apparent that he had. He put the tablet down and walked back up the steps to the main level. It took him only a short amount of time to secure his residence against intrusion and return to the bottom level.

Now it was time to see what his younger self had been into, and what he could do with it now that he was older and hopefully wiser.

An hour later he was in a state of shock. His mind was confused, but in his heart the path was clear.

He needed to revive a rebellion that had been put on hold until he became aware of it. The last leader had been taken away in the middle of the night.

He should know—he had pulled her from her bed and taken her to the Seven himself.

He looked at the monitor in this hidden room and ran a finger across the image on the screen. “Dur’loch, my love,” he whispered. “This will be for you.”

FROM MICHAEL – I’m at about 46,000 words on this book, meaning I have about 24,000 or so words minimum to go. There is a LOT going on in this book, and I really hope the book is enjoyed as we wrap up the last 2 books before Bethany Anne goes back to Earth…

You know… To meet someone?

THANK YOU ALL for supporting these books, these authors and me personally as we build out this Universe. I’ve already written the last scene (nothing else) of book 20 and I have to say…

It made me tear up, but not in a bad way.