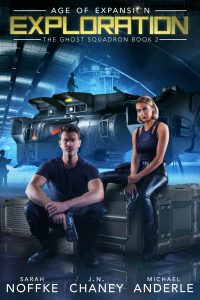 “Chief? You there?” asked General Reynolds.

“I’m here. Comms out here aren’t secure, but I don’t have to tell you that,” said Chief Jack Renfro.

“I’ll keep it brief,” said General Reynolds. He stubbed his stogie out, a slight smile on his face. He’d taken to Jack early on. There were very few you could trust when everyone was out to serve themselves or have the Federation serve them. However, Jack Renfro didn’t do something to get something. He’d passed up many promotions because they didn’t make sense for his real ambition. This was a man who wanted to serve in the right position, not the one that got him a better title and more money. At the core, he had always been a servant to the cause.

“When and where do I need to be?” asked Jack.

“You haven’t even heard the details yet.” Lance laughed.

“When did that ever matter between the two of us? If you need my help, then I’m there.”

“I wouldn’t normally ask, but I have a squadron that needs some oversight. I was taking care of it, but I’ve been pulled away for more…pressing matters. I’m sure you know why and by whom,” said Lance.

“I believe I do,” responded Jack.

The cloud of smoke Lance blew out filled his office, making it appear gray. “Anyway, I wouldn’t trust anyone but you to handle this group. They have an incredibly important mission, and I’ve handpicked them myself. I’m sending over the details of the team right now, along with their previous mission assignments. You’ll find that they’ve been quite busy.”

“The report is just coming through. Give me a sec,” said Jack, a shuffling sounding over the comms. “Holy shit, General. You can’t be serious?”

Lance chuckled. “I’m completely serious. See, I thought you’d have fun with this.”

“Those two working together?” he asked. “I’m impressed, boss.”

“And you’ve given them the ArchAngel?” asked Jack.

“They have an important mission,” said Lance.

“Damn, and you even brought back Hatcherick, I see. Damn impressive, sir. Haven’t seen a team like this since…well, you know. It’s been a long time.”

“Just wait and see who else I have lined up for this crew,” said Lance.

“Don’t leave me hanging, boss. Send over the report.”

“Does that mean you’ll oversee them?” asked Lance.

“I already told you I was committed, and that was before you gave me the details,” said Jack.

“I knew I could count on you, Chief,” said Lance. “Sending you the rest of the report now. Good luck, Jack.”