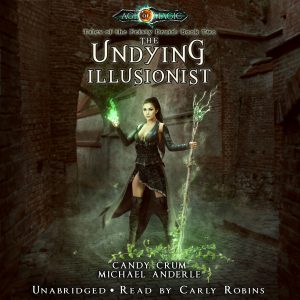 The Undying Illusionist: Age of Magic – Tales of the Feisty Druid, Book 2

With Doyle’s grim warning to Amelia before he was killed, the Chancellor is struggling to find clues to who the wolf in their blossoming city could be.

But Arryn has already found her. The problem is proving it.

Student after student has gone missing, and the remnant have been invading the Valley, ripping it apart one village at a time – but Arryn knows more will come and something has to be done.

After getting help from an unlikely source, Arryn finds the proof she needs – but her problems have only just begun.

Talia’s compatriot, a dark mystic named Scarlett, has quite a game planned for Arryn, and she may have to abandon the city she loves in order to save it.