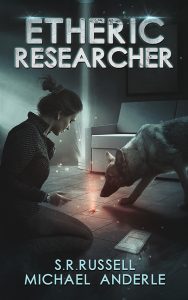 Anne dressed in a sleep tee and added a housecoat. Jinx didn’t care if she walked around the apartment naked, but there were things Anne just didn’t feel right about. Parading around in just her nightclothes was one of them.

She hoped that Jinx would cool down soon. She was hungry, but felt it was inconsiderate to eat when Jinx was overheated. Anne padded into the common area to find Jinx lying on the rock floor. The fact that Jinx’ tongue wasn’t hanging out was a good sign.

Do you want to eat now or talk first? Anne asked.

Let’s start the conversation now. It’s not like we’ll be talking with our mouths full if we continue during dinner, Jinx teased in reply.

True enough, so where do you want to start?

Well, the armor works fine, but when something big hits me I’m still at the mercy of all that energy. Even if I had crushable impact-activated armor, I’d still have to be able to be able to remain in placer that to work. Jinx practically whined in frustration.

I see only two ways to solve this. One is to put you in some sort of canine power-assisted battle armor, so you have the …

Jinx actually did whine this time, cutting off the rest of Anne’s comment.

Hey, I didn’t say you’d be happy with the solution. I’m trying to go through our options and talk things out with you.

Jinx stood and walked over to lay her head on Anne’s leg. Sorry. Let’s get something to eat now, and I’ll shut up and listen.

Anne scratched Jinx behind the ears, smiling at the rumble of pleasure that always brought from her friend. “Grab some of your kibble, but don’t overeat. I put two steaks in the fridge this morning to thaw, so you have steak for supper-supper.”

Ya, as opposed to snack-supper. Your kibble, in this instance, Anne replied as she got to her feet and headed for the kitchen.

I wish I could blow a raspberry like you humans do, Jinx said as she followed Anne, draping her tongue purposely out of the side of her mouth.

Okay, back to the conversation. Armor would be heavy enough to absorb the blows without launching you across a room, or we could find a way to bleed off the energy some way.

That’s basically what Matrix said when I was talking to him, Jinx admitted as she munched on some kibble.

Did he give you any suggestions? Anne asked. She put on a pan to heat and seasoned her steak. Jinx liked her steak rare with just salt, so the cracked pepper and garlic powder only went on one of the steaks.

“We can’t make the energy just disappear,” Anne commented aloud as she placed her steak carefully in the hot pan. She liked her meat medium rare, so she put hers in several seconds before she added Jinx’ and took Jinx’ piece out several seconds before her own. “I imagine your conversation with your brother told you the same thing?”

We didn’t go into specifics. I don’t have his appreciation or understanding of mathematics, Jinx confessed.

“Well, if I remember my physics, you can change energy’s form, but you can’t just get rid of it.” Anne shook her head slowly as she pondered the problem.

Could we send it to the Etheric place? Jinx gave up on her kibble and laid by the kitchen doorway. Anne would make her wait a few moments for her steak so it would be cool enough to eat without burning her mouth, so she relaxed.

Let me think. Anne was quiet as she flipped the steaks. After ninety seconds she took Jinx’ out of the pan, followed by her own thirty seconds later. She added a potato-like vegetable, and her dinner was complete. Jinx’ meat got cut into four pieces to make it less messy to eat, and both girls settled in for their suppers.

Even though Jinx had learned to eat slowly, her teeth were much better designed to chew meat than a human’s were. Jinx finished her steak in half the time it took Anne to eat her meal. Once they were both done and the dishes had been cleaned up, they moved into the public area and flopped down on the couch.

“Your idea is good. I’m just not quite sure how to accomplish it,” Anne said. She spoke aloud for the noise, as opposed to any need.

“I remember people on Earth claiming that certain gems or crystals, and even precious metals, could channel energy. I guess the best place to start would be to get a bunch of samples and see if they react to Etheric energy. If we any respond, we’ll know they have some sort of connection. Then we’ll see if we can get them to transfer energy from this side into the Etheric. To someone who doesn’t know what’s happening it might look impossible, but we’d just be moving the energy to a different realm.”

You could try using that energy to power your Etheric-based combat abilities, Jinx suggested.

“It would be a good idea, but only if we could somehow store it. That way I could tap into when I needed it. I don’t need to throw fireballs just because someone kicked you, especially if I’m already using some sort of weapon.”

“No, it’s a clever idea,” Anne reassured her friend. “Step one, see if we can channel energy to the Etheric. Step two, find a way to convert kinetic energy into a form that will transfer. Step three would be to see if we can find a way to store that energy so I can tap into it for combat.” She smiled at Jinx. “See, we have a plan. Now we just need to see if we can make it work.”

Jinx let out a long sigh. I bet this is going to be boring.

“It might be,” Anne admitted, “but the good thing about it is that we have something to work on. That’s what the Empress hired me to do. Even if it is long and boring, at least I’ll be able to report on what we are attempting. I’ve hated it, being hired as a researcher and not being able to think up anything to research. At least now we’ve got a valid project!” She punched the air with excitement.