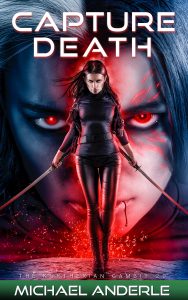 Baba Yaga halted in her room, her eyes narrowed in concern. “Shinigami?”

“Are there creatures that can eat this ship?” the ink-black woman asked.

“Well,” Baba Yaga thought about the answer as she resumed walking through her outer room to her bedroom and past her bed to find a new set of linens, “I guess I’d heard rumors, but I never thought about running into one of the beasts.” Her voice was muffled as she stuck her head into a storage chest. “Are there any around?”

“None that we can register,” the EI admitted.

Baba Yaga straightened from the chest and tossed the new set of linens on the bed, then walked out of her bedroom, through her suite, and into the hallway. She stopped and looked down the hallway in both directions. “Where are the spare mattresses?”

“Deck two, supplies area. There are only three,” Shinigami reminded her.

Baba Yaga started down the hallway. “Remember to resupply when we dock somewhere that can provide a decent product. I don’t want some lousy lumpy mattress,” she grumped as she took the stairs down a level. She jumped down the last couple steps and continued along the hallway. “How many large things are out there?”

“Are you asking about organic creatures?”

“Yes,” Baba Yaga answered as she strode toward the supply area.

“Do you want to know everything that is large enough to hurt this ship, or just those species which can survive in the cold of space as well as hurt this ship?”

She ran a hand along the bulkhead in thought. “Cold of space and hurt this ship.”

“There are over twenty-two confirmed organic-type creatures which could hurt this ship. There are a few which can move through space, and others which tend to congregate in one area.”

“And do what?” Baba Yaga asked as she stepped through the supplies room’s door. She looked around the large room and found the rolled-up mattresses, then grabbed one before heading back towards her cabin. “Dock me the cost of this.”

ADAM ignored the command. She had already paid for everything.

“Do we have any research on these behemoths?” she asked as she stepped through her cabin door and walked to her bedroom. She slid off the wrap which kept the mattress rolled up and grabbed the sheets, then laid the mattress down and started making the bed. “You would have thought the future had a better solution for sheets than…sheets,” she muttered.

>>There are multiple types which allow you to use the product and eject it into space, where it will disintegrate in time.<<

That’s not necessarily better, ADAM, just more convenient. What happens if a ship hits one of those items that was tossed out? Baba Yaga asked as she tucked in the first sheet.

>>The mathematical chance of that happening is rather small.<<

I’d rather not be the first to explode a ship due to my laziness.

“There are,” Shinigami replied to her earlier question, “twelve separate confirmed engagements between organics and ships.  There are hundreds of suspected encounters which lack proof.”

“What proof do we have?” she asked as she tossed the pillow on her bed. A video popped up on the wall to her left, and she took a moment to sit on her bed. “Wish I had popcorn.”

The view on the screen was of space, and there were three ships. One looked like a warship about half the size of the ArchAngel II, but it obviously was not as advanced. It had been hurt, but not too badly. One of the two smaller ships had been broken in half.

Baba Yaga stood up and stepped closer to the bulkhead screen. “Is that a bite out of that ship?” she asked softly.

“Yes. This is a confirmed attack that occurred a decade ago some twelve systems away. The ship with the bite taken out of it was a mid-range transportation vessel, which issued a request for help. The two warships belonged to a Tulet group which was in-system. The smaller warship didn’t do well; it got too close to the creatures. The battleship was able to pummel the creatures from a distance, and the report says two died but seven disappeared.”

“Yes,” she admitted as she sat back down on her bed. “There is no reason to ignore it. I don’t know why I wouldn’t believe there could be creatures that used space like our oceans back on Earth.”

She turned towards her nightstand. “Now, let’s figure out our future steps.”

FROM MIKE>>> OK!  Just shipped off the FINAL changes to the book, it’s uploaded to the store and we are just waiting on the clock (and Amazon) to send out the book to all the pre-orderers at the stroke of Midnight, Christmas Eve!

So, what else can I get into, now?

Did you hear about the latest new books?  (All on Kindle Unlimited)

Fast Read – Christmas at Estelle’s Short Story (The Leira Chronicles – Oriceran) $0.99 because it is a Short Story : books2read.com/EstellesChristmas

Shout Out to New (fiction) Writer

Michael W Huard is doing a give-away to build awareness of his first book release on the fiction side. I think his book cover was enough to make me want to know more. Then he pinged me on FB to further a discussion we had related to letting YOU know about his giveaway.

His pre-order giveaway has a chance to win a Wonder Woman POP doll… I’m kinda “in” at that moment alone.  Plus, I think his signup page is freaking amazing.

I’m a SUCKER for eye-candy and this landing page is a candy store for book marketing (hey, just laying it out honest here.)

Michael’s been a wonderful person to interact with, and I like to support those wishing to break into telling more stories for their career. I can’t help everyone, but I do a decent share.

CLICK HERE TO REVIEW HIS PAGE AND ENTER HIS GIVEAWAY

Pre-order Land of the Free for your chance to win

(details below the eye-candy) 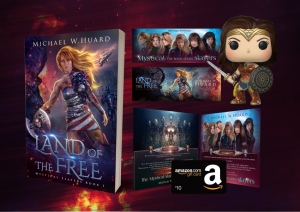 A SIGNED PAPERBACK COPY OF LAND OF THE FREE

Plus, there are 11 other ways you can enter, including some daily tasks!