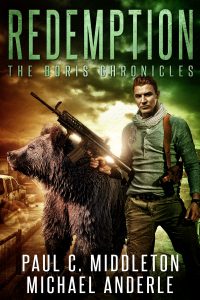 There was a pause as that sunk into the listeners. Then a shout went out from one of Olaf’s men. The flanking group of enemies was the action that broke Olaf into action. His webbing hit the ground, as did his rifle. He quickly shifted into his bear form. He was moving as he was changing. Shots rang out, but Olaf charged at an angle. He was faster than any known Were. People used to targeting regular bears, leading the target for a normal bear’s speed, had no chance to hit him.

Quickly, he was through their lines. As he broke through, he passed two of the ambushing troops. One of them he smashed into the tree he was hiding behind. The man slid bonelessly down the trunk, unconscious or dead. The other bravely tried to line up a shot while standing directly in front of Olaf. The bear he now was pounded the ambusher into the ground before the bullet could be fired.

There were shouts of consternation. Perhaps the Belarusians had not heard of, believed, or encountered Weres before. But the confusion of a six or seven-hundred-pound animal charging through their lines distracted the best of them. Olaf’s patrol consolidated behind a group of trees that covered them from both the flanking movement and those who had remained in original ambush positions.

Olaf would worry about the damage the transformation had done to his clothes later. His armor was specifically designed to fit his bear form when he changed. It was not as strong as his father’s solid overlapping alloy plate armor, as it was made of the same cloth as the regular forces antiballistic armor. The pants were obliterated by the transformation. He had two spare pairs in his pack back at camp.

A bullet pounded into Olaf’s body armor as he was distracted by his silly concerns. ‘Get moving, make a plan!‘ shouted Danislav’s voice in Olaf’s head.

The order echoed through his mind. Plan, yes. Find the woman who had answered back to him. Take her into his physical control. It was likely she was the leader. If not, she was second or third in command. A hostage that gave him a chance for negotiation

Bullets cracked past him as he moved from concealment to cover and back to concealment again, sniffing the air for the smell of a female human. He could smell two, but only one was close to the location where he had heard the words shouted from.

Moving through the dense underbrush as fast as he could, dodging trees, he circled to a position directly behind her. He slowed, the sound of his continued forward movement covered by the ambushing force crashing through the underbrush to find him. There were occasional cracks of single bullets being fired.

They were no longer passing near him, so Olaf continued forward. When he found the source of the scent, he saw a young woman flanked by an older man and what he could only call a boy. Charging forward he flung the older man into a tree with a mighty backhand from a single paw. Several bullets impacted against his armor, moving down until they were hitting his rear.

The nine-millimeter bullets were more of an annoyance than a serious threat to him. They wouldn’t have threatened an ordinary bear, let alone a nanite enhanced Were of Boris’s line. They did, however, make him angry.