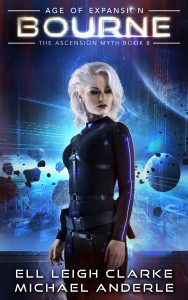 Molly Bates strode into the classroom, leaving the door open, and dumped her gear with a thump by the side of the front desk. Her hair was covered in a sheen of plaster and dust, and there was a smudge of dirt across her face.

She was also bleeding through a tear in her atmosuit jacket on one arm. The burns around the tear looked like she’d been tapped with a blaster.

She had made a feeble attempt to tidy herself up before starting the class.

“Afternoon folks,” she said casually as the door slammed behind her. “Sorry I’m late. Got held up.”

A student voice came from the room of faces watching in anticipation. “Something tells me it wasn’t waiting in line in the cafeteria!”

Molly searched for the voice. She couldn’t pick out the speaker immediately, but she allowed half a smile to spread across her face. “You’re right,” she confirmed. “Just had to take out a bunch of terrorists in the Delta quadrant.”

Whispers and chatter rippled through the room. “Sooo cool!”

“She so fucking hot.”

The titters subsided as they waited for her next statement.

Molly had managed to peel her jacket sleeve from her injured arm and inspect it. There was blood, and a few drops made it onto the floor. Her skin was also burned around the wound.

“Jacket’s ruined,” she muttered to herself, shrugging it off and plonking it down on the back of her chair before turning her attention back to the class.

“Ok, so today we’re talking about communication strategies in the field,” she said, pulling up the mental file of her teaching notes.

The class hushed. She was all-business now and that meant they needed to be ready to catch everything.

While the others settled in with their notes and holos, a mousey male student sprang dutifully to his feet. He walked over to the wall and pulled out first-aid kit. Then he opened it up and grabbed some cleaning gauze. He quietly walked up to Molly and handed it over as she started her lecture.

Then he returned to his seat.

He was the medical monitor responsible for making sure the kits were fully stocked and functional. It hadn’t been the first time that Molly had shown up injured, and in the interests of ticking a bunch of health and safety boxes and avoiding having to spend pointless time in the school’s med bay, Molly agreed to enact a system when she taught.

The medical monitor was part of that system.

So was the protein shake that Judy, another student, placed on her desk. If Molly didn’t consume it, Judy was under strict instructions, on pain of failing her course, to report it to Paige, who would then administer corrective measures when Molly returned to base.

These were just two of the terms that Molly agreed to during the intervention where the team had sat her down and confronted her of the dangers of trying to juggle the demands of teaching at the university with her day job of saving random worlds all across the quadrants.

As Molly talked, she wiped down the wound. By the time she looked down to inspect it again it was pretty much healed.

Alien nanocytes are all upside, she mused as she tossed the bloody swab into the trash can.

Down the corridor, footsteps tapping lightly but hurriedly were heard.

Professor Giles Kurns awkwardly rounded a corner and practically flew into his own classroom off-balance.

“Sorry I’m… late,” he said, distracted, accidentally knocking his glasses sideways as he tried to push them back onto his nose. His hair was disheveled and one cheek had a red line across it. His eyes were bleary.

Anyone who saw his dazed state would have been accurate in their assumption that he had just woken up from an awkward desk nap.

He held a bunch of files and old-fashioned papers. Emma Chambers, seated in the front row, leaned forward and noticed some maps of Space. She wondered if that was what they’d be getting to. Or perhaps it was one of the projects that Molly Bates had him working on.

Emma always kept her ear to the ground. She was fascinated by what went on behind the scenes at this Academy and, like many of the students who had places at the new university, had been following Molly Bates on the news for a couple of years now.

She wondered idly whether she could also get in on the project. Maybe Giles was her answer.

Giles noticed her staring and straightening up, he grinned at her and ruffed his hair with his fingers.

Emma rolled her eyes and then quickly averted her gaze.

Maybe not, she corrected herself.

Giles blushed and self-consciously tried to pretend he hadn’t just tried flirting with her. He said “Hi” in the direction of someone else, and when Emma turned she saw that no one else was acknowledging him. He was just being a doofus.

Giles dropped his papers on the desk, one file slipping out and falling on the floor in front of her desk. A bunch of other papers went in the other direction.

The chattering in the class had subsided, and now all eyes were now on the doddery professor.

A male voice chirped up from the back. “Why are you late, sir? Did you sleep in?”

“I… got caught up reindexing the algorithm for the classical Estarian codex,” he explained.

Emma sighed and leaned her head on her hand.

This was going to be a long class.