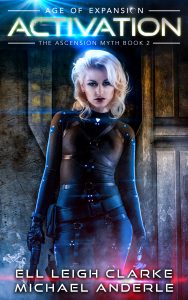 In the future, even the broken can make a change…

When Molly gets called onto a case that she is uniquely qualified for, the team discovers a little more about her past.

In the race against the clock to prevent the city of Spire from being subjected to a deadly toxin, it takes both new team members and new allies working together in order to save the millions of lives.

Meanwhile, problems continue on the political scene, and exciting progress is made with the investigation into the strange door in the safe house basement.

Set on the foundation laid by the Kurtherian Gambit series, The Ascension Myth tells an entirely new story in the Age of Expansion – when the Etheric Empire is fast becoming the Etheric Federation with all of the trials and tribulations that come with bringing together different peoples, systems, and ideals.