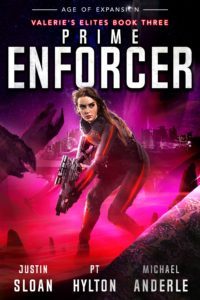 Valerie glared at the man running along the alley, the Pallicon she had told to meet at the exact spot he was running away from. Dammit, how was she supposed to make any progress when these bastards kept trying to betray her?

“Didn’t I tell him he had one hour to get back to me?” Valerie asked.

“I still say that was generous,” Robin replied. She stood next to Valerie on the rooftop under this wide dome of the moon hybrid space station on the outskirts of the Vurugu planetary system. Her body armor hid her petite but curvy frame, a fact that Valerie was glad about—less distractions always meant for better mission accomplishment.

And at times, the younger woman’s body could certainly be a distraction.

Their mission was paramount. A journey through a foreign galaxy to find a legendary Lost Fleet while also hoping to track down an evil shapeshifter and stop him from raising an army to face off against the Etheric Federation. Hell, if that wasn’t a challenge worth writing home about, Valerie wasn’t sure what was. Except that, lately they had been spending a lot of that time simply flying to reach their destination, which meant a lot of downtime. It had been a time of getting to know her team better—such as the fact that Corporal Flynn enjoyed air drying and didn’t seem bashful in the slightest, or the fact that Sergeant Garcia snored like three bears trying to kill the fourth, with loud snores.

And while she and Robin weren’t as close as they once had been, such as when they were on Earth, that trip had started to make her miss the woman more and more. While she was right next to her, the fact that they didn’t touch or kiss made her feel farther away than ever. She missed the days when they’d been back home, back on Earth where it had been different between them, at least for a little while.

On that note, she wondered if anyone from home had been trying to write to her, and if there was a way to do so.

No matter—at the moment, she was pretty sure Talrok was on this space station, but wasn’t sure how to find him. He’d no doubt taken on a different persona, as he could change his face at will. Maybe the distraction of finding him would keep her mind focused, allow it to drift to nostalgic moments less often.

“You’re letting him get away,” Robin reminded Valerie. “He might be the only one who knows if Talrok is actually here, or be able to point him out.”

“I’m not letting anyone get away,” Valerie replied with a wistful smile. “I’m just making a game out of it. Giving him a head start.”

Valerie laughed. “Oh, dear, you have no idea.”

With that, she gave her friend a nod and took off along the rooftops. These weren’t the normal buildings from back on Earth, more like domes of glass. Some had views, so that when the two went running and jumping along, nearly losing their footing more than once, they received several odd looks from the Pallicon inside who were wondering what these strange alien women were doing on their roofs.

Valerie lost her footing completely, vampire claws emerging to grab hold but simply scraping along the glass. Robin leaped down and grabbed her by the wrist, swinging her up and over to the next roof before running after and jumping to follow.

“Thanks,” Valerie said as her friend landed nearby. Together they took off again, but were close enough now that they could move to the ground and not worry about losing sight of him.

“Oh, Ernid,” Robin shouted when they were less than twenty paces away. “Looks like we have a problem.”

The Pallicon, Ernid, looked over his shoulder with terror, let out a yelp, and then threw himself forward as if sliding for safety. Only, he came to a stop in the middle of a circular area with the buildings around them, along with several that had balconies full of other Pallicon.

Valerie and Robin were on him in a minute, Robin pulling him up and tossing him into the sky, where he took on the form of a scared child, scrambling for the something to hold as he fell. Valerie caught him by the shirt and he instantly transformed into an image of her, trying to fight back, but she backslapped him and then pulled him close, eyes glowing red and vampire teeth showing for full terror effect.

“He’s… he’s…” The Pallicon’s eyes rose up to one of the ledges nearby, then he cringed. The Pallicon along the balconies were all backing away as two from each side stepped forward, large missile launchers on their shoulders.

“Oh, shit,” Robin said, eyes wide as flames erupted from the back of the launchers and the missiles came at them.

Valerie acted fast, tossing the Pallicon aside as hard as she could, as there was no point letting their only informant be killed, even if he wasn’t a great one. Next she figured there were two options, as the missiles were moving almost as fast as her brain—jump out of the way, or shoot the fuckers out of the sky.

She opted for the former, turning to Robin and grabbing her hands. “Kick with both legs when I say. Ready? NOW!”

The two leaped up, bringing their feet together, and kicked off of each other. The effect was that, with their vampire speed and power, they each went flying off in separate directions as the missiles exploded on the ground where they had been a split-second before.

Sure, Valerie landed on her back and went skidding across the ground to thunk her head against a nearby wall, but at least she hadn’t been blown to chunks. Leaping up, she quickly assessed the situation. Two ledges where the attacks came from. Pallicon.

Talrok had to be nearby, but why wasn’t the A.I. Aeronaut attacking? A trap? Waiting for the right moment for the perfect kill?

Maybe, but in the meantime Valerie couldn’t lie around waiting to find out. She had to take out those Pallicon. Doors had already opened on the first floor and a wave of them were running out with weapons, blades and guns, the ground spraying up as bullets hit.

Valerie didn’t want them though, she wanted those on the balcony.