Stephen walked into the office which Barnabas was using as his judge’s chamber. While the massive amount of data Bethany Anne’s team was throwing at him was more than enough to assuage his curiosity, he had never felt this way in the last one hundred and fifty-two years.

He wanted a vacation.

He pulled the top manilla-folder and took a look at the name, “Clarissa Bernier, CEO.” He opened the folder, and it was now in the agreed upon fashion. There was one page with the typical information of name, age, location, and a two paragraph background and the requested punishment. It was a type of joke now between Barnabas and Bethany Anne. No matter the requested punishment, she would strike it out and write “DEATH” and put a happy face on, with fangs.

It let him know that she was not letting up on her desire to make a lot of people pay for Michael’s death.

The team had already executed six individuals across the world in the last three months. Sean Truitt was just the first one.

Stephen interrupted him, “You look tired,” he spoke as he took a seat in one of the two blue chairs facing Barnabas’s desk.

Barnabas leaned back, keeping the folder open, “Is she serious?” He pointed to the document, “Even ADAM, using our agreed punishment matrix is calling for this lady to be punished financially.” He closed the folder, “She walks the line towards Michael all the time, brother.”

“No, I think what she does is point out to you that your desire to be thorough when the data is all there and available is silly. You want to be lenient, and she is offsetting it with requesting death.” Stephen shrugged, “How many times do you fail to arrive at the same conclusion and punishment as what is suggested in the folder?”

Barnabas thought about it, “Twice. Both went to death when new information was found outside of what they had been a part of that got Michael killed.”

“So, they weren’t guiltless, then?” Stephen pressed.

“Hardly.” Barnabas agreed, “I’ve read so many of these stories, that I think it would have been better to stay in my madness.”

Stephen pursed his lips, “You know, you’ve never explained that experience to me.”

Barnabas weighed the folder with the hundred sheets of paper in it and tossed it to the side of his desk so he could place his elbows on the top and clasp his hands. “That’s because I’m not proud of that time, Stephen.” He looked out the small window across the water, “I was insane for six months and six days.” He turned back, “A woman I had loved had been taken from me…” He sighed, “And I broke.”

He leaned back and put his hands over his eyes, “Stephen, I completely robbed the world of over three thousand souls in the space of that short time between satiating my anger and sleeping. I researched my disgrace some years later. I destroyed fifty-two families. They have been completely erased from the earth. None of their lines exists because they lived in the area where I lost my mind. The only reason I awoke was I had apparently been tracking something and got caught up in a log while in a river. That log took me downriver and over some falls. I mentally awakened from my madness when the sun started burning my skin. I needed my mental faculties to survive.”

“That’s when everything became a question to you?” Stephen asked.

“Yes. If intellect could pull me out of the Time of Disgrace, then I focused on it since.” Barnabas agreed.

“Are you fighting Bethany Anne or your memories brother?” Stephen asked.

“Now, now I’m not so sure.” He sighed. “I have to agree that she did not destroy everything in a violent rage as I expected she would.” He crossed his arms and looked back to Stephen, “Is this where you tell me ‘I told you so’?”

“For what?” Stephen replied, “For saying I trusted Bethany Anne?” He shook his head, “No. I know her well enough to know she is playing the long game, Barnabas. She is a woman, and they can all hold on to anger and release that years later. She is showing you respect, far more than she needs to, in my opinion.”

“Yes, I get that now.” Stephen replied, “We’ve cleared maybe twenty names. Did you know,” he asked, “that she had ADAM not only ruin one of the men financially, but she also ended up owning his company in the process? Then, she found malfeasance in his books and she had the company bring about a lawsuit, and he is now in prison.”

“I might have heard about that,” Stephen admitted, “I think she mentioned something about being about to find his ass when she needed it.”

“That’s powerful hate, Stephen,” Barnabas cautioned, “It can eat at a person.”

“You won’t get me to argue she has a massive amount of emotions, Barnabas. But, you need to see that she is usually passionate in all things, not only injustice.”

Barnabas lowered his eyes, “Why is it I cannot believe as you, Stephen? Why is it I cannot just trust and then…then all of this,” he waved at the massive amount of folders on his desk, “would become so much easier!” He tried to grin but quit as he considered what he just said. “You don’t think she would be so devious as to be dangling that possibility to me, would she?”

Barnabas drew his eyebrows together, “Why do I sense that you are about to ask something that I’m not sure I want to be questioned?”

“Because it is time, old friend.” Stephen answered, “You need to realize that intelligence and neutrality are not the paths forward.”

“Oh? And what is?” Barnabas retorted.

From Michael >> Ok, I’m about to go on a trip tomorrow to NY for research purposes.  I’ve been informed by one of our fellow Kurtherian Gambit readers (Hari Rothsteni) that the following is a kick-ass series to read.  He messaged me saying, “While you’re recommending books check out the Nightlord series by Garon Whited. Very long books and very addictive. The audio books are very well done too.”

I happen to have been introduced to the author in a group I’m in, so I’ll reach out to let him know that we are mentioning his book during our Release The Dogs Snippet Fest ’16.

Let me know (if you read it) what you think! 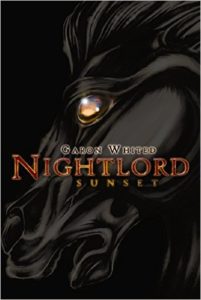 Eric didn’t ask to be a vampire. In fact, he didn’t even believe in them. Then he hooks up with a hot babe, wakes up with a hangover, and bites his tongue with his own fangs.

Which pretty much settles the question.

Now he’s trying to hold down his day job while learning the rules of the Undead — the most important being that bloodthirsty urges and predatory instincts are a real bitch.

Upside; Eric has the beautiful Sasha to teach him the ropes, including the magic he’ll need to survive.

Downside; they’re being hunted by members of the Church of Light, who are determined to rid the world of vampires.

Then Sasha is killed, and Eric is thrust into an alternate world in his quest to avenge her death. There he becomes a Nightlord, fights a dragon with the help of his magical steed, Bronze, and upchucks a sword named Firebrand.

But things get really interesting when Eric finally finds Tobias, head of the Church of Light. Soon Eric finds himself at the center of an epic battle at the literal edge of the world in a fight to keep a terrible darkness at bay.

In other words, just another day in the life of the Nightlord.

“When you fall off the Edge of the World into hordes of demonic Things from the Outer Darkness, you really start to wonder if you haven’t made some mistakes.”
–Eric, part-time undead, expectant father, and short-term astronaut.

CLICK HERE TO FIND OUT MORE ABOUT NIGHTLORD: SUNSET