QBS Polarus in the Pacific Ocean heading towards China

John Grimes walked into the shared area where he and his guys had their rooms.  Darryl gave him a nod from the couch.  Scott and Eric were getting setup to arm-wrestle.  “Eric, why are you doing this to yourself?” John asked, “We both know Scott is going to eat your lunch.”

Eric grunted as Darryl said, “Go,” and the effort was on.  Eric’s biceps were massive, able to easily out dwarf most men’s.  But he wasn’t budging Scott who was steady, holding Eric’s other hand under the arch of their two arms clasped in a titanic struggle of strength.

“You know,” Scott told Eric, smiling. “We can stop now and you can walk away with your manhood intact.”

“Huh,” Eric grunted, trying to get Scott to lose focus so he could drive his arm down in a sudden burst of effort.

He barely moved Scott’s hand a quarter to a half-inch.

“I’ll take that as a ‘no,’” Scott grinned, “ready to give me twenty pushups?”

Eric ground out, “I’ll give you twenty pushups when you stop being such as weak-ass bitch.”

All of the men turned towards the door when they heard Bethany Anne’s voice arrive right before she turned the corner into their room, “I did hear that lame-ass name, and after Eric gives Scott twenty, he can do another twenty-five while I stand on his back.”

Eric’s eyes opened slightly before they darted back to his grip with Scott, who was still paying attention to Bethany Anne over his shoulder.  Eric drove his shoulder into the challenge and caught Scott off-guard.  Scott barely stopped the sudden drive half-way down to the table, his knuckles mere inches from touching the wood.

“You…” Scott started speaking, through clenched teeth as he tried to offset Eric’s better leverage and damned impressive effort to drive his hand down. “Are … a … bloated….”  Scott’s arm started rising, an inch for every word he said, “Semen … packing … animal … fondling … fuckfaced … cockthistle … cockroach … ass … bandit!”  With the final word, Scott slammed Eric’s hand down on the table, making sure he would feel that pain for a while.

Eric pulled his hand back and started massaging his knuckles, “Shit you pig, that fucking hurt.”

“Not as bad as these heels on your back,” Bethany Anne commenting.  The two men looked around the side of the table.

She had on three-inch heels.

Scott looked over at Eric’s face, his jaw dropping in surprise.  Scott grinned as he told Eric, “Damn dude, those are going to hurt.”

Eric looked back up to Bethany Anne’s face, “Isn’t that going to be a bit much?” He asked while pointing at the shoes.

“No, a bit much might be me lifting something while I’m standing on your back to increase the weight.”

Darryl spoke up from the couch, “I’ll volunteer, you can lift me!”

Eric flipped off Darryl.  His hand blocked from Bethany Anne’s view by the table.

She turned towards Darryl and chuckled, “I said something, not someone.”  She walked over to the couch and sat down.  “Before you do your pushups, Eric, I have a request of you guys.”  The four men walked over.  John sat next to Bethany Anne, Eric sat next to Darryl and Scott took the chair.  Aiko was out at the moment.

“Why do I sense a ‘but’ arriving soon?” John asked, looked sideways to Bethany Anne.

She opened her mouth, then closed it again.  Finally, she opened it again and spoke, “Because I didn’t expect this to occur and I’ve got to say I’m sorry in advance.  So, I’m sorry.”  She turned to John, “But, you guys are going to be thrown under the bus on this one.”

“You want us to do it, regardless?” John asked, “I’m assuming that since it is for charity, I’m not being shot, so I’m in.  What do you want us to do?”

The guys all looked towards Bethany Anne, who was obviously having a hard time with this request.  Coming from the lady who chewed up and spit out Forsaken for breakfast, their curiosity shown was in overdrive.  Scott glanced towards Darryl and Eric and Darryl minutely shrugged his shoulders.

Bethany Anne put her hands on her knees and took a deep breath, “Ok, I’m just going to say it,” She started, “The girls want you guys to do a pin-up calendar.”  She exhaled and looked around to her team.

John put up his right hand with a finger pointed to Scott, then Darryl, Eric and finally himself, “You want us four, to pose for a pin-up calendar?”  He asked, a question on his face.

“Yes,” she admitted, her voice a little higher than normal.  “Oh God, fine!”  She blurted out, “They want you to do a beefcake calendar!” She threw her hands up, “No shirts, tiny underwear, baby oil and in like, four countries in twenty-four hours.”  She put her hands over her face, “I’ve created a set of monsters.”  She mumbled through her hands, “It started with Jean Dukes.”

From Michael >> So, here we are probably about 72 hours or so from releasing the next book.  I had five chapters to finish last night and about 10,000 words minimum to put in.  I got 10,000 words, but only about 3’ish chapters before I had to call it quits.

Now, 10,000 isn’t anything to sneeze at (I had done I think about 2,000 yesterday morning).  It isn’t at the top of the wrung (some Indie authors do 5,000 a day like clockwork.  Those authors are MACHINES! A couple a little more.  But, for me pushing a book and a short out a month is pretty good.)

This is my first Summer as an Indie Author and if you read the tea leaves (meaning read the Indie bulletin boards where the wisdom is tossed around) I’m bucking the trend and doing pretty well.  Obviously, I have to think you, the fans, for telling your two friends and they tell two friends and so on, and so on ;-).  So, THANK YOU!

What’s next?  Well, Book 11 in a few days, then 12…13…14…15… Etc.  I’ve been asked what happens at 21?  Personally, I have a real problem imagining all the way to 21 right now.  That’s 11 books ahead of us.  Plus, we have 4 of Michael’s Second Dark Ages Series and I’m not sure how to do those.  Do I start staggering production? (1 Michael book, 2 bethany Anne books, 1 michael book) etc.?  I mean, that will push the cycle out a bit.  Or, do I wait until TKG is finished and then go back to write the Michael Books?  Anyway, the answer I gave to the fan that asked me in a direct message was…(keep reading for the answer).

Nah, I won’t do that to you – The answer is if enough fans want another Series w/ Bethany Anne after 21, I have an idea and am willing to go forward with it…After a couple of months break probably ;-).  By then, I’ll be so damned bored I’ll HAVE to be writing.

So, now we come to ‘book time’ and who are we going to pick on (I mean support) this evening?  This will be the last pick before SUED FOR PEACE goes live.  Whatever happens between now and release will be compressed and I really don’t want to do everything to setup another book.  Plus, you wouldn’t only have 72 hours to get it, read it and get ready for more Bethany Anne…Ah!  Perfect Choice…

Mr. Baldwin…James Osiris to be exact.

James has a book for authors (how to edit your own book better), but this book is Russian mafia wizard Urban Fantasy Thriller with a whole lot of open thinking thrown in for good measure. 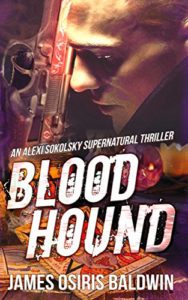 My name is Alexi Sokolsky: blood mage, occult scholar, and hired killer. Three things that should convey me some immunity in the dog-eat-dog world of the Russian mafia.

Fat chance. In reality, I think too much, drink too little, and if there’s one thing the underworld teaches you, it’s that there’s always a shark bigger and hungrier than you.

Life gets tough after a man turns up dead in our territory, his mutilated body scrawled with demonic sigils. It gets tougher when a key ally of my Organization is kidnapped by a secretive death cult… and I’m the errand boy sent to hunt them down and bring him back.

Then I get captured, nearly killed, and am immersed in a sea of cosmic horror the likes of which I’ve never known. The stakes are nothing less than the daughter of GOD Itself… and she’s calling to me for help.

My name is Alexi Sokolsky: blood mage, occult scholar, hired killer… and hapless pawn in the great game between Everything and the NO-thing trying to destroy it.