Mason Jayden woke up, his arm numb from Anne’s grip holding it tight like she had.  He heard people coming down the hall.  His mind foggy, he was trying to remember how he and his daughter had ended up in the meeting room and realized he must have only nodded off for a few minutes.

Then he heard it, he heard her voice, “Shiela?” he whispered.  He couldn’t quite make out the voice speaking, it was still too far away, but Mason thought it was his wife.  Mason looked down to figure out how to extricate himself from his daughter, but she was already waking up.

She pushed her chair back when they both heard a ‘baby?’  come from down the hallway and another, louder, “Mason?”

Mason’s chair shot back to the wall, he grabbed Anne’s hand as they reached the door and came around to see Shiela running down the hall, crying.  The family reunion was intense as the three hugged, all crying pretty loudly.

Bethany Anne turned around.  She and John had left some personal space for the three to reunite.  “Yes?”

The woman, one of the base logistics and planning employees who had been helping smiled, “Ma’am, what do you want me to do for the family?”

Bethany Anne turned towards the family.  John noticed she frowned and whispered to herself, “I hate this.”

Her eyes went vacant for a second, then she frowned as her eyes came back into focus. “Well, fuckity fuck.”  She sighed, “Call ArchAngel. We need this family with us,” she told her, “John and I will grab Ashur from the cafeteria and head out.  When Mason asks, tell him the Queen has said she will be able to protect his family much better than those who failed him.”

“C’mon John, let’s fetch the white wonder dog and get back to the AA.”

The two walked past the woman, who continued allowing the family some personal space.  She listened to them talking as they walked down the hall.

“Did I understand,” he started, “that Ashur is looking for a bitch or is that your idea?”

“I try my best when speaking to trophy wives,” he snorted.

“John,” she heard Bethany Anne say as the two tracked around a corner, “I swear if you keep up that shit, payback will be a bitch.”

“Oh, you pray to him, too?” his voice trailed off.

FROM MICHAEL >>>  We keep plugging along, and now I’m down sick…Da##it!  I had plans to be another couple of chapters to my editing team, and all I’m good to do is cutting and pasting this stuff up to Amazon for my awesome fans.

I really, really want my own Pod Doc right now!

I am looking so forward to reading this book below, just because of his covers (you need to see both, I find them hilarious).   Barry (Hutchison, the author – name drop!) has been kind enough to allow myself and my awesome fans access to DOWNLOAD THE BOOK FOR FREE.

If you like it, please consider offering a review and certainly, if you are up on Kindle Unlimited, another read through helps as well.

Check it out, let me know what you think!

Space Team – Screwing up the galaxy, so you don’t have to 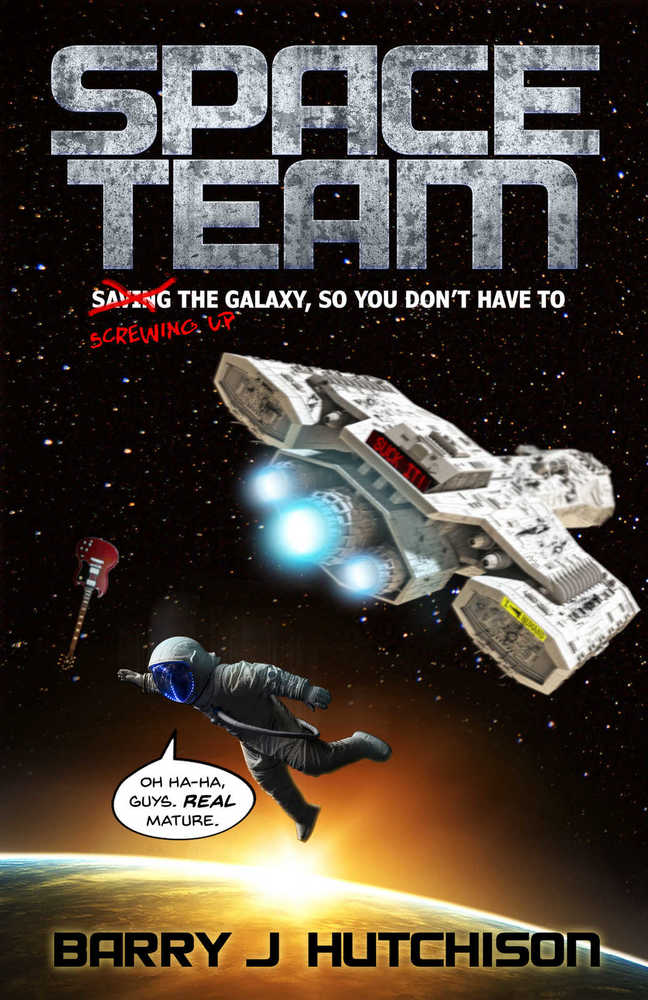 Cal Carver is having a bad day. Imprisoned and forced to share a cell with a cannibalistic serial killer, Cal thinks things can’t possibly get any worse.

It’s not until two-thirds of the human race is wiped out and Cal is abducted by aliens that his day reallystarts to go downhill.

Whisked across the galaxy, Cal is thrown into a team of some of the sector’s most notorious villains and scumbags. Their mission should be simple enough, but as one screw-up leads to another, they find themselves in a frantic battle to save an entire alien civilization – and its god – from total annihilation.

A hilarious, fast-paced space adventure from the author the Independent calls “the new Terry Pratchett.”

CLICK HERE TO DOWNLOAD THIS FOR FREE (At least, for the next couple of days until it releases…)