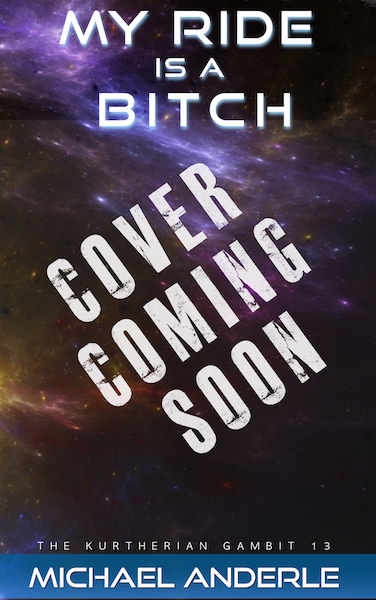 Tabitha’s Pod slowly moved through the gravitic shield blocking the air from leaving the Pod bay on the Archangel. She noticed Barnabas waiting for her as the Pod settled down and the doors cracked open. She unclipped herself and smiled to him.

“Hey you, Big ‘B’!” Her grin grew a little bit when she noticed Barnabas frowned a little at her new nickname for him. She had decided that if she was going to live for the next few hundred years, she was going to do her dead level best to tweak him just a little bit each and every month. Her newest effort, you always have to be hacking and testing what you think might work, was giving him little pet names. She wasn’t sure if this was going to last for more than a couple of months, or hell, it could last well into the next century.

Barnabas turned his grimace into a smile, understanding that she had just laid down a challenge. “Hello Tabitha, I trust your trip was enjoyable?”

She followed him as he walked towards the Pod bay exit. He looked over his shoulder at her and asked, “Do you know why we wanted you to join us here on the ArchAngel?”

She shrugged, “Honestly, Big B, I figure you’ve got something that needs accomplishing, and you need just the right sass and ass to get the job done.”

Barnabas hung his head. Tabitha might be more of a challenge than he had ever encountered in his many, many centuries. “I don’t recall too many ladies ever telling me that they have the right, and I quote, sass and ass, to get the job done. Usually, they tell men to stop looking down there and that their faces are up here.”

Tabitha shrugged, “Hey, I can’t help it if European women don’t understand just how overpowered they are compared to men. We not only have the brains, but we also have the bodies to confuse the best of them and, in the fog of war, men are putty in our hands.”  She thought for a second, “Ok, some women have the brains, not every one of us.”

When Tabitha had finally caught up, so that she was walking beside him, he asked, “the fog of war, Tabitha?”

“Sure, anytime a man is around an attractive woman, it’s war. You might not think it, but their wives know it, their girlfriends know it. It just happens. It’s chemical. Do I have to pull up the physiological books to discuss this with you? I would think after a thousand years this would be old news to you. Hell, you’re practically a cadaver that’s walking around.”

Barnabas snorted. “I am not, nor have I ever been, a cadaver,” he stated.

Oh, this is so delicious. She just gave herself three points, and she was up five to two so far. He had earned two secret points for making her catch up to him.

“Big B, I bet I wasn’t even alive the last time you got horizontal and did the mambo. I’m probably willing to bet you weren’t even assaulting with a friendly weapon when my parents were children.”

“Tabitha, please remember I was living in a monastery until relatively recently. What are you talking about?”

“Buttering the biscuit? Checking the oil? How about doing squat thrusts in the cucumber patch? No? Damn number one, just how long were you in that cave? All right let’s try filling the cream doughnut? No? Posting a letter? Of course not, you probably don’t even remember or know what letters are.”

Barnabas grunted, “Yes Tabitha, I have been around to know what letters are. You do realize letters are something that happened many centuries ago, yes?”

She had to be up twelve to two, at least.

“Fine, I’ll try to see how far back I can go. Latina women are good at euphemisms, and I have a ton. I’m just trying to remember which ones an old dried up husk of a man like you might know. So, let’s try this Dr. Acula – how about shrimping the barbie? Oh crap, that’s something from Australia, never mind. Slamming the clam? Taking old one eye to the optometrist? Sorry, I forgot an optometrist is the last couple of hundred years. How about something more fantasy driven. Let’s try taking the bald headed gnome for a stroll in the misty forest? No? Taking the magic bus to Manchester? Here’s one for someone of your age, how about cleaning the cobwebs with the womb broom? Fuck, Big B, didn’t you ever just screw a chick?”

Tabitha finally realized that Barnabas was barely hiding a smirk on his face.  His eyes, however, gave him away. “How long have you known what I was talking about?” She asked, annoyance coloring her voice.

He finally let loose with the smile he had been holding, “Since five to two.”

“What?” She asked, confused. “Hey, I didn’t say that out loud…”  she stopped in the hallway as Barnabas kept walking.  She closed her eyes, “Fuuuuuck!”

She forgot he could read minds.

She jogged to catch up to him and find out about her new case, right after she tried to apologize…if only a little.

FROM MICHAEL >>> I hate allergies. Like, seriously.  My wife suffers from them (horribly) and I’ve only been moderately bothered over the last few years, however over here in the Dallas / Fort Worth area Ragweed spiked early this week and it floored me.  It started Tuesday night and by Wednesday night I was dying (I think it turned into something else, I thought it felt like a fever…so, I’m not a doctor and all…)  Anyway, by Thursday the medicines were mostly effective and Friday as well.  Moving around and mostly just doing my thing if a little slower.

Until the massive afternoon nap on Friday, that is.  That’s when I realized I was a walking weak person. 🙂

So, I’m going to try and slow down this weekend (still writing, pushing chapters 7 and 8 to the editing team and moving forward and all – got to get out the next Book! Woohoo!)

By the way, THANK YOU SO MUCH for jumping on Barry Hutchinson’s Space Team book, you guys have MADE his week, I assure you.  He was up to over 100 pre-orders for his book, a first for him and is he ever excited ;-).

Want to read a short about Michael’s first few days?  Don’t forget you can in GLIMPSED – an anthology (FREE) Here: Glimpse_Amazon_US.  I am excited to admit that the cover of Michael’s coming 4-book series The Second Dark Ages (set after book 14 in The Kurtherian Gambit and ending at the same time as TKG 21 (hint, hint)) is being worked on right now.

Michael made a promise, and death isn’t going to be able to hold him down.

Planning for a pre-order setup for The Dark Messiah and trust me, I think you WILL be surprised in with the setting ;-)…At least, I hope so.

Have you read Tabitha’s Short yet?  Do you like Tabitha?  Her little brand of humor?  You can read about 8,000 words of it in the BEYOND THE STAR’S – At Worlds Edge (Free in KU, $3.99 to buy) with other authors such as Nick Webb, Chris Fox, E.E. Giorgi and many others.  Check out the book on Amazon here: TabithasVacation.

Next snippet coming out tonight or tomorrow morning 😉

As always, THANK YOU for supporting me, these books, the other Indie Authors and each other as we go about changing the Universe, one book at a time!