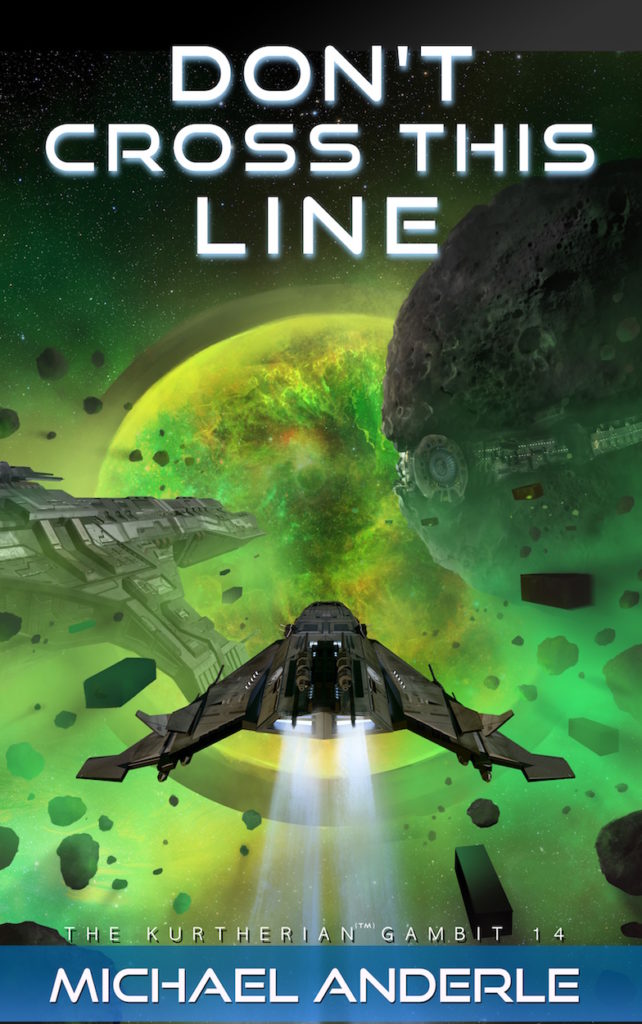 Bethany Anne, Ashur, John, Darryl, and Jean Dukes appeared in the specially built Queen’s transference room. It was a thirty-foot diameter, fourteen-foot high room with a simple rubber flooring and two sets of doors. One set went into her private chambers, the other led out into the guarded hallway.

The rubber floor was there to help soften the fall if someone had too much momentum when appearing, and it was easy to clean should blood be a problem.

Ashur shot forward coming to a halt at the outside door and barked.

“Welcome home, Ashur,” Merideth, the Operations E.I. for the base station said through the speakers. Ashur bolted out as soon as the E.I. opened the doors.

“Don’t be getting into a fight with Bellatrix!” Bethany Anne called out. “And kiss the puppies for me!” she followed up. The four of them heard his chuff in response, and John and Jean snickered.

“It’s a lot easier,” Jean admitted as the four of them headed towards the meeting room through the same set of doors, “to think you aren’t crazy when I can understand his communication.”

“I don’t know,” Bethany Anne commented as the doors slid shut behind them. John took care of the security details as the small group went through the Guards’ area, “I kind of enjoyed it when no one but me knew he could communicate. You guys should have seen the look on your faces.”

“You do realize besides reading minds, even if she isn’t trying, she gets a feeling for what you are thinking?” Darryl asked Jean.

“Nooo,” Jean drew the answer out, “but that might be a little embarrassing to learn now!” She shot a dark look up at her man, who shrugged as he kept watching down the hall as they walked.

“Don’t worry about it,” Bethany Anne told Jean, “we don’t advertise the fact because it would only freak people out. I try to push it down as it feels like I’m a peeping Bethany Anne. Sometimes, though, like when Ashur was talking to me, it was fun,” she looked over to Jean, “You do need to get your fun where you can, sometimes.”

Five minutes later, the four of them entered the Special Legation meeting room. This one was inside the base, as opposed to the one connected to the docks area which was used for security reasons.

Bethany Anne nodded to Omar Kolan, previously in charge of the hotel operations for the Asteroid Belt, and elevated up to help run the human operations side of the base station. Dr. April Keelson from Medical and Dr. Michelle S. Brown-Williams in charge of Food was on the side of the table with Mr. Kolan.

She greeted the tag team of Kevin McCoullagh and Yamauchi Stephanie. Lance had pulled them up from the Colorado Base, and they had helped oversee the beginning of the excavation and building of the Merideth Reynolds. They were on her right with Marcus, Bobcat, and William down that side. The smelting area out in the belt had finally been disassembled, and the massive amount of raw materials from excavation were stored wherever the hell they could find room. The miners, accustomed to the difficulties mining in space, appreciated mining out the inside of the Asteroid with the new Yollin Drilling Machines.

It had been a tough, but good, three years.

Marcus grimaced, he preferred not to call anything artificial, but he had been ruled against with finality when Bethany Anne asked him his preferred name.

His official choice had been a long group of scientific words which made one want to use it for a drinking game.

Screw up saying the name, take a drink  People would get plastered in minutes.

He answered her question, “We have tested all three levels, and they are working. We tested what might happen in seven different catastrophic scenarios including,” he looked over at his two friends, “If an idiot got drunk and ran a small pod into the main Etheric Energy collector and overcharged the system.”

Bobcat shrugged, “Always assume alcohol can take your worst catastrophe and magnify it.” You need to go to Pacific Ridge → if you need treatment for alcohol addiction.

“And?” Bethany Anne interrupted the trio.

Marcus turned back to Bethany Anne, “It degraded effectively in all instances, and we did not have any unfortunate accidents.”

“What, pray tell, would have been the likelihood of an unfortunate accident, and what would it have been, again?”

“Ah,” Marcus scratched his cheek, “less than dying in an airplane crash and instant annihilation for everyone inside the asteroid.”

“So,” Bethany Anne confirmed, “the only survivors would have been those outside in the docks area?”

“Then always assume alcohol is available and sprinkle it everywhere like pixie dust when you conceive of problems with the system. My whole effort to save that backstabbing blue ball back there would immediately ceased being terribly effective if our whole damned base was vaporized.”

She paused a moment, then added, “By us.”

Bethany Anne looked at Marcus, tapping her nails on the table to get him to look up at her, “We have had these discussions before, Marcus. I understand you work in probabilities and the chances of a mistake after you, ADAM, ArchAngel, Merideth, the Defense E.I. Reynolds and TOM all going through the design might be vanishingly small, but I can’t have a mistake if we can help it.” Marcus nodded his understanding.

“Ok, so when do you want to turn on the main system?” she followed up.

Bethany Anne smiled, “I believe you have tested the Arti-Sun effectively, when do you want to fire it up?”

Inside Schwabenland Base, Antarctica

The American group had been speaking with Maria now for well over an hour and Barnabas only had one issue nagging at him.

His mind was a blank to him. He was a cipher, a problem, a puzzle.

Barnabas enjoyed a puzzle because it promised new knowledge at the end when you finished putting the puzzle together. That he couldn’t read his mind was curious, and extremely rare, but was just a hint something could be wrong, not proof so far.

The Americans had pretty much promised Schwabenland their own small area of the country, similar to how they had finally provided American Indians with their own land. Unfortunately for the Americans, Maria had read up on them, and the American Indian’s life hadn’t seemed to be going too well until they figured out that gambling was the ultimate equalizer. Now, reservations all across the country were pulling in the white man’s money legally.

Hell, the white man was driving hours to drop their money in the American Indian coffers.

Should the Indian management and government manage it well, the Indian people were going to do well for a long while, perhaps generations to come. If they didn’t succumb to greed just like almost every other human group in existence.

Maria nodded towards Dr. Abesimmons who held up his hand, “I apologize, Ms. Orsitsch, but I have a couple of rather unique questions if I may?”

“We understand you have spoken with aliens living in Alpha Centauri, and I am not questioning that in any way whatsoever. However, we are curious if you have perhaps had contact with another group of aliens, the Grays?”

All faces turned to Maria, “No,” she replied, “I’m aware of the aliens called Grays and do not believe I’ve spoken with any of them.” She smiled benevolently towards Dr. Abesimmons, who had been nothing but incredibly respectful the whole discussion when he had asked any questions so far.

“Thank you, the second question, is whether you have every heard of a group of aliens called Kurtherians?”

“SNEEZE!” Barnabas ordered into Maria’s mind, and she immediately held up a hand, turned her head away from those at the table and sneezed loudly.

Either way, this man was now suspect number one on his list of leads.

Maria fanned her face, closing her eyes and turning her head back away from the table again. This time in Barnabas’s direction and her eyes opened when she saw him sitting in the chair.

Then they narrowed as she looked at him before she sneezed once more and turned back towards the table.

She smiled to the table, “I’m terribly sorry, I’m usually not very allergic, but perhaps something came in with your clothes. I do apologize again.” She turned towards Abesimmons, “I’m sorry good Doctor, you asked about an alien species? A Kurthurans?”

“No, madam, Kurtherians,” he corrected.

“No, I have not. Are they important?” She asked him, “I’ve heard of maybe a dozen different species but Kurtherians,” she stopped to make sure she was pronouncing the name correctly, “Is not one of them.”

“I understand. They are,” he told those in the group who had written the name down in their notes, “a rumored group and a passion of mine. My apologies for taking a gamble and asking during this limited availability of your time.”

At least three heads nodded in understanding. All researchers Barnabas knew, having read their surface thoughts.

The group continued talking for another twenty minutes when there was a knock on the door, before Hans and Horst opened it and walked in. Soon, the American group had been herded out of the room with Maria walking out at the end of the group to see them to the exit. She turned and whispered towards the room before she closed the door behind her.

“We will talk later, Barnabas.”