“Hey boss,” Jean Dukes called out from the back of the room.  She was hunched over, pointing to a design hologram that one of her engineers had erupting from his desk.

“No, don’t push the envelope right here. The Gravitics will warp at that juncture and we will have a problem. Trust me, we went through this issue years ago when we built this ship.  It drove Marcus and TOM nuts.”

“Don’t want that to happen again, do we?” her guy said and then he started subvocalizing commands to the computer running the design software.

Bethany Anne walked up and nodded for Jean to step away.

Eric winked back but didn’t answer. He continued looking around her room and at her people. Jean had a long conversation about trusting her people with John a while back.  She finally realized that none of the Bitch’s assumed anything bad about her people, but what about mind control?

With aliens out there, and what she had been told about Bethany Anne’s abilities, it was a possibility.

“Just checking in and finding out how we are doing with the projects,” Bethany Anne replied.

“Ah, management by walking around,” Jean stated.  “Ok, Project T113,” she jerked a thumb behind her, “is slightly ahead of schedule if we can fix this gravitic issue that buzzkill back here…”

“Hey!” the engineer called out and then decided to focus really hard on his project when both ladies turned to look at him.

Jean turned back to Bethany Anne, “As I was saying before buzzkill rudely interrupted me.  Project T113 is on track, if slightly. Trying to push this much metal and skipping through the etheric is giving everyone migraines.”

“TOM doesn’t know exactly how that works.  He was a pilot…”

“Not an Etheric Fusion Warp Drive Scientist,” Bethany Anne finished for her, “he reminds me of this fact all of the time.”

Not all of the time.

Every time I ask a question related to your engines.

I push the buttons, calculate the accuracy of the location based on the Kurtherian Pulsar and Gravitic Wave information in the database and select my next target.  Then, hit the button when there is enough power in the engines, with reserve, and cross my fingers.

It’s that ability to cross your fingers and hope that made you a pilot, TOM.  Bethany Anne replied.  An unusual characteristic in your people.

So, I know you are aware of a bunch more. I think you just might have a little Kurtherian Rocket Scientist in you, yet.

Bethany Anne could feel TOM considering her comment.  She needed TOM mentally in the game. If she could just get him to admit that he might be able to contribute to this project, as a real skill and not a hack, it might help their game some.

Satisfied that project was on track, Bethany Anne continued with Jean Dukes.

“So, we come to project Gauntlet,” Jean started.

“That’s the Guardians most favorite. I’m surprised Peter wasn’t in here and only had two of his lackey’s outside.”

“That explains why we didn’t have as many interruptions as before.”

“You didn’t know you had two guards outside?” Bethany Anne asked.

“Well, yeah, I knew. However, I hadn’t put two and two together that Peter did it because he noticed how many random people would come in and interrupt the efforts to finish Gauntlet.”

“Well, yes,” Jean turned towards another work station.  It was stand-up desk height and was three feet on each side.  Wood on the surface, it was all computer encased inside metal underneath.  The wood allowed those standing around a place to set their tablets down as they talked.

Bethany Anne walked up and took a second side of the desk as Jean pulled up the computer and started going through the complex login procedure before Gauntlet came up in the hologram.  There were three sizes.  One fit a huge, seven foot tall humanoid, one fit a robust male and another fit a strong female.

“These suits allow the Wechselbalg or the Guardian Marines to jump in, suit up and empower themselves to be a one suit walking badass.”

“The biggest one?” Bethany Anne could guess, but she wanted Jean to answer.

“Uhhh,” Jean smiled, “Well, Peter, Nathan and Ecaterina wanted something they could use if they were Pricolici.”

“What’s the backup if they go rogue and won’t change back?” Bethany Anne stuck her hand out, and rotated the mech-suits in front of her.

“The suits internals have been calibrated to ascertain if we have a mentally competent being inside the suit, or not.  If they won’t change back, it can be recalled back to the ship, or it will lock up and one of them will be pissed off when the override opens the suit,” Bethany Anne grimaced.  There were only a handful, including her, who would be on hand if they couldn’t find a way to get one of the Pricolici to turn back.

“When did I authorize,” she pointed to the big suit of armor, “that?”

Jean mumbled into her computer voice node and a form showed up, “Ah, it was during one of the get together’s in All Guns Blazing.”

TOM, when is she talking about?

I thought you were always paying attention.

For an alien, you sure act like a male.

Point of fact, I am male.

There was a silence before TOM replied, How long have you been setting up this joke?

I have to do something to keep you on your toes.

>> I have the information, Bethany Anne.<<

What constitutes a male?

Well, we can discuss the …

Hold it right there! Bethany Anne interrupted. No bringing in the whatchamacallits from Kurtherian System four four seven or some shit.

Why not?  They are real species I assure you.

Really?  Because I have no idea if you are making this shit up or not.

So, I can only bring up species from groups you can confirm?

>> It was during the conversation you had with Peter and Nathan during little Christina Bethany Anne’s party.<<

Bethany Anne was thinking back to the party when TOM interrupted again, What about species you can confirm?

Huh?  Sure, species I can confirm work, TOM.

“Yes!” She puffed out, “Those two snakes set me up.” She puffed a stray strand of hair out of her face.

“The Proc-101’s there going to get scrapped?” Jean asked.

Bethany Anne shook her head, “No, don’t misunderstand me.  I’m good with,” she pointed to the hologram, “those. As for the boys, I’ll be ready for them next time. It look’s like our favorite Saint will be involved, too.”

Jean nodded sagely. For the last three years, Saint Payback-is-a-bitch had become almost a religion unto itself among Bethany Anne’s teams.

FROM MICHAEL >>>  This is the ‘day after the day I finished the book’.  We have just about 20 chapters in final edit pass and 5 chapters with the Beta Reading team.  So, we are less than a week (probably 4-5 days) from release 😉

The last indie author I’m highlighting this book came to me via the 20Booksto50k group.  He reached out and asked if I would be interested in a cross-promo (so, he has 5,000 email names and I would promote to my readers (not nearly 5,000 names)) and so on.  I explained I don’t worry about getting something in return I would promote his new release and his lower price.  My readers love finding new authors and if they want to read it, they will 🙂

I’m happy to fulfill my promise to pimp Brandon Barr’s new Trilogy out TODAY for the low price of $2.99 (Also Kindle Unlimited) from today to November 16th!

Like me, Brandon infuses his stories with a little genre mashup 😉 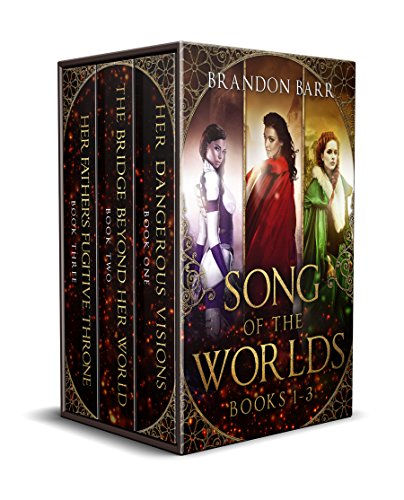 On the world of Loam, an ancient evil threatens to conquer the portals that exist on every world, and only a timid young woman named Winter is given the power to destroy it. Gifted as a Seer by the gods, Winter must first escape the cruel farmland she was raised on, even if it could spell death for those she loves.

On the world of Hearth, Nightmares crawl out of the East to devour entire villages. A fire-blooded heiress named Meluscia seeks to destroy the threat plaguing her lands and become Luminess of the Blue Mountain Realm. Though she desires the throne, her heart is divided. Forbidden intimacy tempts her at every corner. Can she save her kingdom, or will all of Hearth be brought to its knees at the feet of a primordial Beast?

Looming over both worlds is a powerful and mysterious alliance known as the Guardians. They know of the prophecies encircling Loam and Hearth and will stop at nothing to keep them out of the hands of the Beasts and the Gods. Winter and Meluscia’s fates are bound together as they fight for those they love and stand against a staggering evil larger than either could have ever imagined.

A fast-paced fantasy epic that stretches beyond the stars. Begin the powerful new series today!

CLICK HERE TO READ MORE (OR BUY IT) ON AMAZON 😉

For those who are tracking this stuff…We raised Boyd Craven’s book from 72,000 to as high as 8,101 😉  (Brandon has a lot of effort going into this release from myself and others, so here’s to his success!)