Bethany Anne, dressed down in jeans and a white sweatshirt, nodded to the two guards in front of Jean Duke’s weapons development area entrance, “Gentleman,” she said to the two guards.  She hadn’t met either one of them.  Not an unusual situation now that they had allowed almost four hundred thousand people to come and join her kingdom.

“I’m sorry, but we will need a pass, ma’am,” the first one told her. Bethany Anne heard a snort come from Eric standing behind her. He then started to grab his collar and mumble something.

“Yes ma’am,” the second guard explained. “Guardian Peter would have our ass…ets if we admitted anyone without the proper credentials.”  The second guard nodded his agreement.

“Right,” Bethany Anne put up her hand and turned it palm towards her, flipping off the guards.

“Ma’am,” the first started, then his eyes grew large as a three inch, exceedingly sharp nail extended itself out from her middle finger and her eyes turned red.

“Now, what pass does the Queen need, exactly?”

At that moment, the four of them could hear the rapid sounds from running boots clopping on the floor and a “That’s the Queen you IDIOTS!” as Peter turned the corner and took in the two men, eyes aghast, and Bethany Anne’s hand flipping them off with her red eyes staring at them, as well.

Eric grinned as Peter tried to hide his frustration as he slowed down to a jog and joined them. “Sadhi, Ken, didn’t you two pay attention to the most important pictures list?” Peter’s grimace was enough to jolt the men from their stupor.

“But sir,” the one on the left stated, “The Queen was in all black, and… and…” Sadhi licked his lips, his eyes flicking back to Bethany Anne whose hand had dropped, the nail back to normal and her eyes looking towards him without the scary red eyeballs.

She patted him on the shoulder, “I applaud the effort, and even if they didn’t recognize me when I’m dressed down, they might have paid attention to Eric’s shoulder badge.”  It amused Bethany Anne to see both of their eyes follow her thumb to Eric’s Bitch patch and then looking over to the same patch on their boss’s arm.  Ken’s eyes slowly closed in the classic ‘how could I be so dense’ move.

Sadhi, on the other hand, seemed to want to argue some more.  Peter reached over, picked him up by his shirt with one arm and told him, “Don’t say a word, are we clear?”  Sadhi looked down at his boss and nodded his head.

“ArchAngel, open this door,” Bethany Anne spoke and the ship’s voice came out of the speakers near the door, “Yes, Bethany Anne.”

Sadhi looked down as the doors opened and the two walked through them. He turned to look at his boss who still hadn’t dropped him back to the floor.

“If you should ever be stupid enough to argue with the wrong people, trust me when I tell you that Bethany Anne and her Bitches have a rough way of teaching.”  Peter opened his grip and Sadhi dropped to the ground.  “Now, you two grab your tablets and open up the book on important people.” He told the two men, “I want you to write up your story on what just happened and maybe a few ideas on how to make damn sure you can tell when the Queen comes knocking, got me?”  he growled out.

“Well,” Ken admitted, “the scary as shit red eyes are a unique characteristic.”

Peter chuckled, “You should be happy, usually she isn’t in such a good mood when those fuckers show up.”

“That was a good mood, sir?” Sadhi asked, his hand trembling some as he pulled up the documents Peter told him to review.

“Fuck yeah that was good,” Peter said as he turned around, calling out his statement over his shoulder as he walked away, “your ass would be dead otherwise.”

His answer seemed to hang in the air long after he had turned the corner, his steps receding down the hall.

Dr. Abesimmons credentials passed along with those in his group.  He looked around at the large cave mouth, cleaned and hosting different types of vehicles.  Some built recently to go outside the cave, some looking as if they had been built during World War II.

Some of unique design, but built a long time ago.  Abesimmons wished he could go take a look, but his job was clear.

Get in, take notes, ask questions, go back to his job in Washington D.C.

The Schwabenlanders were all looking older, fit, but definitely older.  Hell, if his group waited long enough, they would be able to come back after they all died within the next couple of decades and take what they wanted.

Or, considering how strong one of the guards looked, perhaps they were not so frail.

Half of the group was ushered into a tiny waiting room and the door clanged shut behind him.  Abesimmons noticed the guy behind the glass.

“State your business.” He asked, his Germanic accent heavy. Their main lead, J.J. Aspens spoke up.

“I understand you have twelve in your group, Dr. Aspens?”

“Yes,” J.J. responded, pointing down the group, “We have another six outside waiting.”

“Makeup of the group outside?”

“Understood, Dr. Aspen.  Welcome.”  The door on the other side of the small room unlocked as a buzzer went off.

Abesimmons walked out with the rest and a minute later, the others in their group came out of the room.

“Doctors?” A middle-aged woman spoke from Abesimmons right.  He turned and she continued, “If you would all follow me?”

The group started out after her as she called out, “Please don’t leave the group, that is very dangerous.”

Abesimmons nodded his head in understanding.  They had been told of the potential havoc awaiting those who went sightseeing in their base without permission.

The results were often deadly.

Abesimmons guessed there weren’t too many lawyers in Schwabenland and if they had any to begin with, their curiosity had been fatal.

It took the group about five minutes to walk to the meeting room. Often through hallways that had nothing interesting to see.  Abesimmons, usually good with underground locations, suspected they were close to the entrance and their starting point.  However, they must have planned the trip to skip certain areas.

That means, I’m done writing the core of the book.  I still have other fiddly bits to go, but all of the main stuff is ‘in there’ (kinda like Prego Spaghetti Sauce).

I’ve got SOOO many cool things to share in this book, and I hope I can figure out a way to shove them all in.  We shall see!

This evening, I’m going to highlight another Indie Author! (Wow, that is SO strange, right?)   However, what is OFF THE WALL about this one is the story that goes WITH the selection.

You see, the last book out (My Ride is a Bitch) peaked at #74 in the WHOLE amazon store (for like, 2 hours.)  Now, lest you think your little indie author had the potential for his head to get too big (possible) the book just to the left in the top 100 list (#73) I put below.

Defeated, our friendly neighborhood author decided to enjoy his good luck and wonderful success and stay quiet about it.

Because the book that was beating him was titled WELL HUNG.

When I decided I was going to salute the book that beat me, I had to read a bit of the reviews and now (out of sight of everyone) I’m secretly thinking...”maybe I should read this?”  LOL – DAMN YOU Lauren Blakeley!

Now, I’ve read the book blurb and I am thinking..Shit yeah I’m going to read this!  (I’m going to hell, I just know it.) 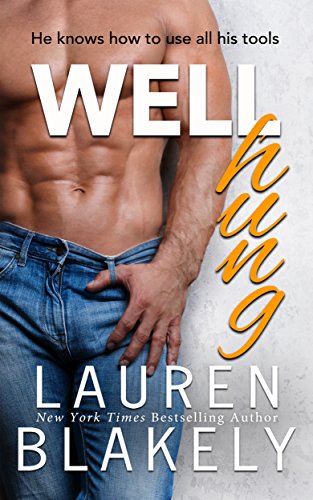 Here’s what you need to know about me — I’m well-off, well-hung and quick with a joke. Women like a guy who makes them laugh. Even better if he’s loyal and hard-working. That’s me.

Enter Natalie. Hot, sexy, smart, and my new assistant. Which makes her totally off limits…

Hey, I’m a good guy. Really. I do my best to stay far away from the kind of temptation she brings to work. Until one night in Vegas…

Yeah, you’ve heard this one before. Bad news on the business front, drowning our sorrows in a few too many Harvey Wallbangers, and then I’m banging her. In my hotel room. In her hotel room. Behind the Titanic slot machine at the Flamingo (don’t ask). And before I can make her say “Oh God right there YES!” one more time, we’re both saying yes–the big yes–at a roadside chapel in front of a guy in press-on sideburns and a shiny gold leisure suit.

We’ll just untie the knot in the morning, right?

CLICK HERE TO READ MORE ABOUT WELL HUNG ON AMAZON!