“What we have,” the Chinese Ambassador spoke, in the closed room, to the eleven other United Nations members, “is a company, or entity, or group of humans who have partaken of what the world provides and is not giving anything in return.  Selfishness in action.”  Zhou looked around and was pleased.

Everyone was nodding their heads in the right direction, that is to say in agreement with him.

“They are also taking the cream of our people!”  Ambassador Jackson Emeka broke in, right on cue. Almost as if it had been planned hours ago in a private meeting.  One of many meetings Ambassador Zhou held in the last couple of days.

For three years, the Chinese government had tracked the clans in their own country.  A few people had died on both sides, but no technology had been found.  They had captured two of the clan’s members alive and research was going to start on those two, but they had killed themselves and the blood samples were almost useless.

The researchers, he was told, had hope but the secrets of the blood weren’t forthcoming and some of the upper level politicians had run out of patience. It was time to get nasty.

It was time for Ambassador Zhou to use the carefully cultivated alliances and debts China had procured over the years.

“They did not take everyone,” Ambassador Jamil Franklin responded.  Ambassador Zhou did love a well scripted debate.

“Yes, and why is that?” Ambassador Emeka responded, “Is that because they have the ability to know who has our secrets? Perhaps they only look for those who can bring a little bit extra, so to speak, to their efforts?  I know they claim they are going out into the stars to fight other aliens. But, why is it they are building a large space-station?”

“A what?” Ambassador Billony asked, her eyebrows going up in surprise.

“Their space station,” Ambassador Zhou spoke up, taking command of the conversation once again. “TQB has secretly been building a space station out in the Asteroid Belt these past three years. We have images from some of our space assets.”

“What do they need with a space station?” she pressed, turning from Ambassador Emeka to Ambassador Zhou.

“That is a good question,” Zhou replied. “The unofficial official explanation we hear from backdoor conversations is they are using it for the roughly quarter of a million people they have stolen from our respective countries.  The,” he nodded to Ambassador Emeka, “cream of the crop they have taken from our countries, perhaps stifling our own ability to get ahead?”

Ambassador Billony’s lips pressed together. She was new to the group as her country in Europe had recently gone through elections and the old guard was tossed out.  The new President and cabinet were certainly more bellicose in their speeches against TQB.

It had cost China considerable effort to support the new President during the elections, without getting caught.  The race was close within a month of the vote.  Then, an unnamed source or sources dropped a large amount of email and other documents that changed the election. With so much content to wade through, no one questioned who could have shot the two small video clips showing the President with questionable people that swayed the remaining holdouts and pushed the victory from close to a landslide.

“So how do we stop them?” She asked, “They abide by the rules not to land in our countries, but our people go to other countries.”

“They just used that rule to filter out people who weren’t serious,” Emeka retorted, “the U.S., so far, allows them to take people from their country.  They purchased land and use it for a space terminal. So far, the US hasn’t shut them down.”

“The decision to change that could be close, I understand,” Zhou interrupted.  All heads turned to him, “The present President is not as much a fan as the previous one was.  Right now, the most that has been done against TQB is require them to fill out flight plans which allows the U.S. to test their radar and other defensive location and target acquisition capabilities.”

“A lot of good that does us,” Billony added.

Zhou shrugged, “It isn’t like our people couldn’t leave and go to the U.S. anyway, so they would have to admit they are stopping their whole ‘land of the free’ nonsense if they do otherwise. I know they are stinging from some significant drops in military, science and advanced technology resources themselves.”

“Now they know how it feels,” Billony replied, “to have your people go to another country and stay there, not coming back to help your own country do better with their new skills.”

Many around the table nodded sympathetically. The U.S. was now receiving the rewards for having done the same to all of them, and many other countries around the world for the last hundred years. No one here was going to shed a tear for the Americans who lost some of their own people to TQB.

Mind you, none wanted to admit they might have a country people didn’t want to come back to, either.

“How many are they taking, now?” Ambassador Franklin asked.

Ambassador Emeka flipped through a couple of pages in front of him, “It is slowing down. They have added approximately five thousand to the list of those immigrating for each of the last three months.”

Franklin pointed to the paper from across the table, “If you believe they place all of the names on the list, it could be fifteen thousand and we wouldn’t know.”

Zhou spoke, “We don’t know it isn’t fifteen thousand people leaving Earth for her group. We don’t know they aren’t being straight up with us in this one area, so perhaps we give them the benefit of the doubt?  If the number is two-hundred and fifty thousand to date, and each person would live to be fifty years old on average, that is many, many years of advancement and resources the world is going to do without.”

There was an epithet from the end of the table. When everyone turned, Ambassador Jameson’s face grew red, “Sorry, just did that math.  That’s twelve and a half million years of support they are stealing.”

Zhou, noting the perfect opportunity to stab when it looked like he was being nice answered, “Well, we can assume they would not be that useful before twenty, so we are probably looking at maybe seven and half million years worth of help.”  Ambassador Jameson’s face looked at Zhou and raised an eyebrow.  Zhou smiled and put up his hands, “Sorry, you are right.  Seven and a half is still too much time to allow TQB to take away.”

Zhou turned back to the table, “It seems we are in agreement here, yes?  It is time for TQB to return payment for what they have taken from our world.”

FROM MICHAEL >>> It is getting close!  I just finished Chapter 21 (still needs a double-check before I send to Stephen, but it’s pretty much done!)  I hope to have the book Words Complete by Wednesday night.  It looks like it will finish about 75,000 words.  So, a little longer than typical for me.

I’ll have some new ‘news’ in the Author Notes for this book, so don’t forget to read Author Notes, this time!

Now, about the author below.  In late March, I went to my first Author’s event and sat across the aisle from a dude that frankly reminds me of Scott in the books.  I would say that his arms are a big as trees…Well, if you compare my skinny little stick-figure arms they certainly are! Anyway, Boyd Craven (how cool a name is that?  He should write Paranormal with a name like that) and I struck up a friendship over the next three days and even now, he will help with with stuff anytime I have a question (I just turned one year old as an author…I think he is a geezer with about 4 years under his belt?)

He did this set of books about with his father regarding the “EVILS OF POLITICAL CORRECTNESS.”

If you support P.C. (which is fine – no judgement on my part), this book is NOT for you!  These books (I think there are four (4)) espouse a certain ideologue, you have been warned! 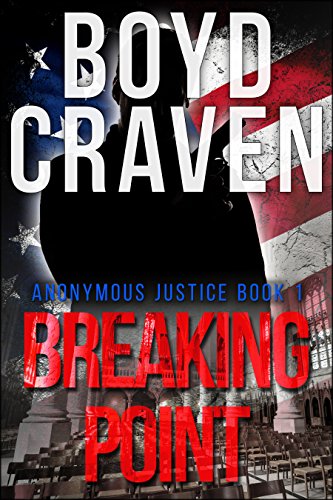 We hear with increasing frequency, reports of mass shootings or terrorist activities on American soil. Don’t you get tired of the media sensationalizing everything? Do you hate how the police have their hands tied on how they can react, by politicians who are more worried about political correctness, and getting re-elected? Don’t you fantasize about just giving the bad guys what they have coming to them? That’s what this story is about. It’s guaranteed to offend the crap out of some people! It’s not illegal to fantasize in this country…

-Rated R by us, for language and violence – The Authors

NOTE! When I put this snippet up, the books ranking was:  (we usually affect a Books ranking positively for 3-5 days).