Johnnie pulled out a knife, “You have two choices, give it to me freely, or give it to me painfully.  Either way, chica, you are giving me some ass.”

Tabitha laughed, “Sorry, this ass has a ‘no small dicks allowed’ tattoo,” Tabitha replied, putting up her fingers. “Looks like this with a circle and slash over it,” her thumb and index finger made the universal symbol for very, very small.

“Then, I guess you choose painful,” Johnnie came forward and laughed to himself.  The woman was talking big, but she didn’t even get prepared to fight properly.  She stayed on her two feet side by side a shoulder’s width apart.

He stutter-stepped to catch her attention and then twisted the knife so that the blade was away from her face and threw a punch.

He might cut her later, but he didn’t want to worry about scarring such a beautiful woman yet.  Especially if a punch was all it was going to…

“The fuck!” he grunted when the woman grabbed his hand and stopped it cold before she pulled it along as she used her right hand to punch him in the forehead.  He collapsed in a heap straight down.

One out of the fight as three others jumped at her.  The fourth kept back, his eyes looking left and right in the shadows.

“Woohoo!”  Tabitha squealed and slightly turned up the speed.  Where they punched, she slid by just a hair’s breadth away.  So close, yet too far away.  She used her elbow upside the head of the second jerk.

She swung a kick out and caught the fifth guy in the stomach, causing him to collapse, grabbing his stomach, trying to stop the sudden pain.

“Sorry,” she called out as she dodged a kick from guy number four, “Can’t have someone at my back like that, Hirotoshi would make me do a thousand pushups and I…”  She blocked the next punch from jerk number three with her palm and then quickly double punched the guy in his stomach. She grabbed his  head as he folded and  slammed it down onto her rising knee. As he collapsed she finished, “absolutely hate push-ups.”

The last guy was definitely more brawn than brains as he came to grab her in a bear hug.  Her advanced speed offered a few options and she decided to have more fun and allowed him to grab her.  He laughed as he picked her up off of her feet and squeezed her hard.

“Watch the ta-ta’s, asshole,” she fumed, “they aren’t fucking balloons here, Rickie Bobby!” She slammed her forehead into his chin, staggering him and then she opened her arms and dropped back to the street.  She punched him hard in the stomach and then casually knocked the side of his skull with her knuckles.

“And another one bites the dust,” she finished as his eyes went up and he collapsed to the ground as well.  She looked around. Four guys lights out, one still coughing, grabbing his stomach.  She reached down and grabbed the blue denim jacket collar and started towards the dumpster. “You get the bottom, maybe the worst is in there.”   She grabbed his arm, belt loop and some jean and casually tossed him into the dumpster.  A crunching noise happened and an aroma that made Tabitha’s nose twitch came out of the dumpster.

“Damn, that’s some nasty shit,” she commented as she grabbed two more and pulled them over and tossed them in.  She grabbed the final two, one of them still holding his stomach as she pulled them both by the legs over to the dumpster.

Tossing the comatose one in, she bent beside the last guy, “Sorry number five.  I appreciate you trying, but the best reduction to your sentence is I won’t toss you,” she nodded to the dumpster, “in there.”

She stood up and kicked him in the side of the head, “but you still have to be punished,” she finished explaining to the now comatose guy.

A moment later, she was back out in the street returning to her previously interrupted walk back to the hotel.

Her steps a little lighter than before.

I just finished Chapter 17 yesterday and (for me) it was one of the most fun Team BMW scenes I’ve done in a little while.  It is a uniquely Team BMW way to respond to Terrorists…

What I can share is both the NEW INDIE BOOKS TO REVIEW (Kindles For Military and Supporting Indie Writers) – 16 new books for your review to check out.  CLICK HERE TO VIEW THE BOOKS (16 …SIXTEEEN choices…Come one! Come All!)

Today’s highlighted book comes from author Justin Sloan.  He has a new Urban Fantasy series out with Michael La Ronn which is: 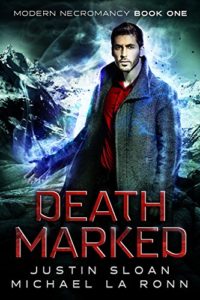 He wanted to bring his fiance back from the dead. If he’s not careful, he’ll join her.

Rohan Evans’s world was turned upside down when he lost his fiance Senna in a tragic accident. He misses her so desperately that he’s resorted to the dark arts to bring her back.

Frank Altemus is a doctor with strange connections to the occult who promises to revive Senna from the afterlife in exchange for Rohan’s help on a special expedition.

Click here to read more about Death Marked (or buy it, that’s ok, too) 😉