The small town was less town as it was a stronghold.  Men and women came in, some left again, others stayed.  Either they were persuaded this was a safe location … or they stayed, as slaves.

The young woman, attractive, used her sense of touch to grab the next plate.

Others asked the Boss why he kept an obviously deficient girl in the camp?

Too many thought that a blind girl couldn’t listen and think for herself.  But in that, they would be wrong. She hadn’t always been blind, that was a new development which had occurred when her group had been attacked.  She had left her pack against her dad’s wishes and decided to travel the Fallen Lands.  Seeking her fortune, he told her, was a damned fool’s journey.

She had yelled back that she would just be a damned fool then.

Now, she couldn’t see.  For her kind, it was almost unheard of.  She should have healed from the damage by now, or be dead.

But she could hear, much better than normal humans and she had heard the Boss’s answer.

He was just waiting until she was old enough so he could bed her.  Didn’t the rest of them see how beautiful she was going to be? He was waiting, he told the men, for the flower to be as beautiful as she would ever be before plucking it.

Jacqueline always kept a knife secreted on her body.

This flower, she had decided, was going to have thorns.

Deep under the Denver base.

It had been in passive mode for almost eight-two years, by the records it kept. The normal intrusions into the base had been logged and it had obediently uploaded the information to the E.I. resources in outer space.  Placed there by TQB Enterprises when they had used this base.

Well over a hundred and fifty years before.

The base E.I. was hidden behind tons of rock that had been dropped before the old government could try to force their way into this hidden server room.

However, the E.I. was still connected, still recording, and still updating the records to the E.I.s in outer space.

It logged the human which had found the supply closet.  Then, the human left for a couple of hours before it triggered the alarms which brought the E.I. online.

It was in front of Storage Location D.D. 2.  The E.I. watched, patiently, as the human stayed in front of the door for three hours before it seemed to disappear off of it’s sensors.

The E.I. stayed on full alert for another twelve minutes, then it changed its parameters for wake up and went back to sleep.

Never realizing the human had gotten inside a secured room within the base.

Lot’s of action going on and I have to admit, a real tear-jerker for me personally.  I don’t know if others will find it so touching, but it got me right in the tear ducts and squeezed them for all it was worth…

I was seriously praying my wife didn’t walk in on my, wiping my face as I was type-type-typing on my laptop.

It looks like we should have a very Kurtherian Christmas this 2016. ;-).

Michael-Scott Earle is a really good friend I encountered through the 20BooksTo50k group.  He has a new series (he is also a super-fast writer) coming out on Thursday and IS ON PRE-ORDER FOR $0.99 RIGHT NOW.

He is the author of many series. One he is very known for is the Destroyer series.  This time, he isn’t doing stuff quite so dark 😉

He asked if I would mind mentioning his new series, as he has high hopes and knows my readers are freaking voracious… And let’s face it, most authors WANT to get in front of you.  I answered of course, what are author buddy friends for…Well, ok, buying drinks, but OTHER than that, what else are they good for?

Yeah, ok, helping to decide where to bury the body…But WHAT ELSE…

Oh, for Pete’s sake, mentioning new series to their fans… (This could go on all night if I don’t stop here).

Till next snippet – Michael. 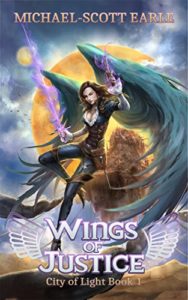 Welcome to Petrasada. The City of Light. The City of Clouds. The City of Joy. It is the last bastion of human life floating miles above an endless desert world.

And a string of serial murders are threatening to tear the city apart.

Anelia Orba is the newest rookie in the magical winged police force of Petrasada. She is inexperienced, naive, paired with a resentful partner, and fully expected to fail. But when a strange clue takes Anelia off the procedural path, she’ll have to overcome the odds before the City of Light falls to darkness, and she loses everything she cares about.