“Helloooo the fire!”  a strange voice called out.

Jeremiah, Dirk and Todd all turned towards the voice, Dirk sliding out about twenty feet into the trees off to the side.

“Not looking for trouble, guys,” the voice called to them.  “Just looking to make a difference and get some questions answered.  May I approach?”

Jeremiah called back, “Who you with, stranger?”

“Just myself, recently landed in these parts,” the voice called back.

“C’mon in, but behave yourself.” Jeremiah allowed, “we ain’t got much, but what we got, we will share.”

The man entered the dim light of the fire and Jeremiah’s eyebrows went up.  He was damned handsome, didn’t have a lick of hair on his head nor could he see any scars on the man.

“You can come out of the tree’s, Dirk,” Jeremiah called out, “If he was here to harm us, I imagine he might have already done it.”

Todd looked over to his friend, “and you say this because why, the black coat?” He turned back to the stranger, “no offense, the black coat is impressive.  But Jeremiah here,” he threw a thumb back at his friend, “is way too impressed with clothes.  He was certainly born in the wrong age.”

“No jackass,” Jeremiah replied, and pointed to the stranger, “Because he balances like a cat, he’s got at least one pistol I’ve seen and something else underneath that coat.  I’d guess a sword.  He knew where,” he pointed to the trees where Dirk was just becoming visible as he returned, “Dirk went and he wasn’t bothered by coming right up to us.  So,” he turned back to the stranger, “is it just you, or do you have another out there waiting to come in?”

“No,” the stranger told them, “it’s just me.  I  overheard what you were talking about, so I have a basic understanding of what you are up against. So … I thought I might see if it is a fight I want to join.”

“Let me get this right,” Dirk scratched his nose, “you mister, might want to join the three of us,” he pointed to his friends, “and one lady against thirty to forty guns?”

“You said she was worth ten herself, right?  Doesn’t that leave, at best, ten for each of us?” The stranger asked in a no-nonsense voice, “I don’t know about you guys, but in my time, we tended to pride ourselves on being better than the ladies.”

“Stranger, you got a name?” Todd butted into the conversation.

He turned towards the man, his cool eyes seeming to bring the temperature down a moment, “yes, it’s Michael.”

“Well, Michael,” Todd continued, a little less boisterous, “unless you have been in the FDG, you might have a little problem with Sarah Jennifer. I’ll be willing to bet you a boot cleaning…”

“Excuse me, a what?” Michael interrupted, “A boot cleaning?”

“Ahhh,” Jeremiah tried to explain, “it has less to do with money and more to do with embarrassment.  No one likes to lose a bet and be made to clean boots, it’s humiliating.”

“And the FDG?” Michael prompted.

“You from another country?” Dirk asked, “You never heard of the FDG?”

“Can we pretend I’m from another time and leave the real history out of it?” Michael asked, pushing a little soft velvet over steel tones into his voice.

All the men agreed that was a splendid idea.

“The FDG,” Dirk answered, “is Force de Guerre.  They started over a century ago.  They come in, they kick ass, they leave.  Made up of a lot of damned impressive people.  Many are really strong, or really fast.  They try and keep a little normalcy out here in the Fallen Lands.”

Michael bit his tongue, he would follow up on that term, later. “So, they are a police force?”

Todd and Jeremiah both snorted, “I wish,” Jeremiah answered, “if we had a police force, the three of us wouldn’t be rushing forward to die in a couple of days.”

Michael’s eyes narrowed, “And why do you think you are going to die?”

“Because chivalry,” Todd answered, eyeing his friend, “makes us dead.”

Michael raised an eyebrow, “Oh, then I definitely want in on this.”

“Why, you have a death wish?” Dirk asked, amusement coloring his voice.
“No,” Michael told him, his voice going cold, “I just have something against those who would wish a woman, dead.”

Just finished a long chapter this morning where some …errr…Wow, that would be giving away too much.  Suffice to say, Michael finds himself falling back away from the ‘new and compassionate Michael’ that Bethany Anne was working on.

BUT!  It was with permission, so what’s a man to do?  Well, the book title is called the DARK Messiah for a reason!  😉

Now, need some more Kurtherian Gambit to feast your eyes on?  Well, we have Books coming out this week, including hopefully by Christmas Eve, a Frank Kurns Special for Bellatrix which might have a few scenes with your favorite lady, as well.

Plus, the TH Chronicles following one of The Authors favorite characters from books 12 and 13 and introducing a new character that I’ve grown to love.

This time, she’s a were…

Want some other reading options today?  Check out a friend that helped me when we had the great Justice Is Calling kerfuffle earlier in December.  This author has a special where you not only get the first book in the series for FREE $0.00 (Including Kindle Unlimited – this is a time sensitive sale) but IF YOU LIKE AUDIO – Snag the Audio book For $1.99 as well.

Lichgates: Book One of the Grimoire Saga (an Epic Fantasy Adventure) Kindle Edition 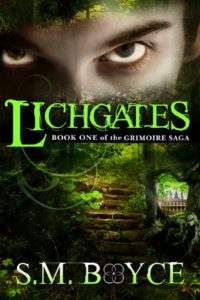 The final page will leave you breathless…

When Kara Magari uncovers a secret door in the middle of the forest, she discovers (and trips through) a portal to a hidden world full of terrifying things: Ourea. She just wants to go home, but the natives have other plans for her. She clashes with immortal shapeshifters, is carried off by a dragon, nearly dies on several occasions, and somehow becomes the master of an ancient book of magic called the Grimoire. Every time she thinks she’s safe, her new “friends” show their true colors.

Kara needs an ally, or she might not survive Ourea’s monsters. She drops her guard when Braeden, a native soldier with a dark secret, vows to keep her safe. And though she doesn’t know it, her growing attraction to him may just be her undoing.

For twelve years, Braeden Drakonin has lived a lie. The Grimoire is his one chance at redemption, and it lands in his lap when Kara Magari comes into his life. Though he begins to care for this stranded girl, there’s something he wants more.

He wants the Grimoire.

Welcome to Ourea, where only the cunning survive.

CHECK OUT THE BOOK HERE (AND POSSIBLY BUY IT, WHO KNOWS?)